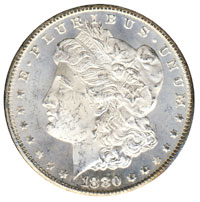 As a numismatist, I have come to rely more on the views of top authorities who love coins more than the holders containing them, and no one tops Q. David Bowers on coins.

He has been author or co-author of dozens of books since his first in 1962, United States Half Cents, 1793-1857, with several titles in 2008-09, including Grading Coins by Photographs, A Guide Book on Lincoln Cents, A Guide Book of United States Type Coins, and the newly released hardcover Whitman Encyclopedia of Colonial and Early American Coins, edited by Lawrence R. Stack.

I wanted Bowers’ perspective on both raw and graded coins sold over the Internet, as condition and attributions of coins are easily (and sometimes intentionally) misrepresented online, especially in auctions on eBay or Proxibid.

Bowers sees online auctions as an extension of currently available outlets such as catalogs and convention sales. While the Internet is a new mode to showcase coins, he advises all prospective bidders “to know the person with whom you are doing business.”

“In fact,” he adds, “one must be even more careful on the Internet.”

Usually I am skeptical of designations by third-party graders such as NGC, PCGS, ANACS and IGC, remembering we should be purchasing coins rather than the plastic designating their grades. Recently, Bowers wrote about that topic in his Coin World column.

Like me, however, Bowers is cautious about all the online bidding of raw coins on Internet portals.

When I purchase coins in this manner, I try to apply two tenets to my purchases—“buy the coin, not the holder” and “buy coins in holders rather than raw.”

In a word, I am leery of altered or poorly shot photographs in Internet auctions.

“In that way,” he says, “there is an indication of integrity and a mechanism whereby a transaction, if it goes wrong—and this happens all the time on the Internet—can be addressed and possibly taken care of.”

Bowers also advises against purchasing coins from unknown international dealers unless they belong to the International Association of Professional Numismatists.

“My advice boils down to this,” he says: “Be a smart buyer, know what you are buying, and deal only with people who are recognized professionals. There are very few true bargains on the Internet. If something costs less than a bidder thinks it is worth, it probably really is worth less.”

Bowers suggests bidders go slowly even with recognized dealers, studying offerings carefully, reading terms of sale, and learning what recourse, if any, is available to return unsatisfactory coins. “There will always be coins, tokens, medals, and paper money to buy, and it is far better to be cautious than to buy something and then try to straighten it out through complaints, attorneys, and the like.”

Keep in mind that the Internet is instantaneous and so adds a false sense of urgency to anything it touches, even e-mail. Auctions have their own urgency because buyers bid against the clock. These factors combine online and often result in overbidding.

You don’t have to do that on coins slabbed by respectable companies. They’re plentiful, and it’s a buyer’s market. Look up the retail price in your favorite price guide, and bid no higher than 60% of retail to cover any buyer’s fees, shipping and handling.