As the Central Bank of Ireland prepares for the launch of a very special coin which remembers the 50th anniversary of the historical visit of President John F. Kennedy to his family’s ancestral homeland in 1963, I’m pleased to share my interview with Mary Gregoiry, the talented artist who designed the Central Bank’s latest collector coin which honors writer and native son James Joyce. Our discussion is the only interview Mary sat for during (and after) the Joyce coin launch at Newman House, St. Stephen’s Green. Shortly after the launch, it was inadvertently discovered that there was a mis-quote from a passage of “Ulysses” which appears on the coin as part of the design. The story made headlines in both numismatic and mainstream news but this did absolutely nothing to deter coin collectors from their interest in this well-designed and artistic coin as all 10,000 pieces in the limited mintage were sold out in just 3 days, a record-sale for the Central Bank.

Mary studied fine art at the Crawford College of Art and Design from 1995-1999 opting for a post grad year in 2000 in which she specialized in Foundry. She has a BA in fine art/sculpture from CCAD. Mary has worked mainly in the medium of bronze, metals or ceramic sculpture though in recent years – she has been drawing and doing linocut prints as well as designing from home. Those collectors familiar with recent Irish collector coins will know of her earlier work for the Central Bank. She entered the design competition in 2007 with a winning concept for the €10 silver crown on the subject of Ireland’s Celtic Culture and influence. I’m pleased to add that she kindly followed up on our discussion after the discovery of the mis-quote on this excellent coin and added some extra poignant comments for which I’m grateful for, I hope you enjoy our conversation! 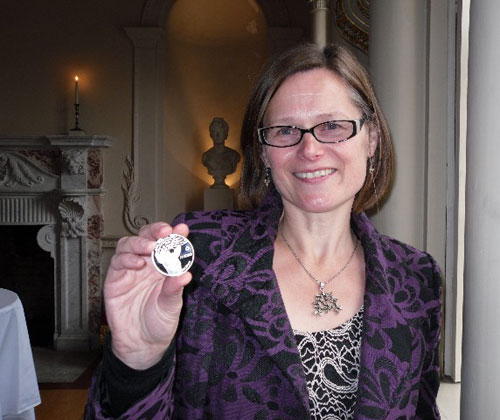 Mary Gregoiry, designer of the Joyce coin poses with her latest work during the official launch.

MA: It’s a pleasure to speak with you today at the Joyce coin launch, well done with the coin’s design, I suppose my first question has to be, were you familiar with his works before you accepted the commission to design this new coin? I think for many, he remains an elusive literary figure.

MG: I won’t say I had a lot of familiarity, I had tried to read “Ulysses” many years ago, once or twice but, holding my hand up, I could never get through it. But, I did enjoy researching his works for a passage with beautiful words in it to appear on the coin and I have to say, I did enjoy reading the book more this time because I had an important reason to read it and found it did “work” if read in the way (I suppose) it was written – the words just “tumble over each other” and you begin to understand what it is he’s trying to say… perhaps I was too young before to understand his meaning!

MA: When you describe his words as “tumbling over” is that why you portrayed the passage or words from “Ulysses” as literally tumbling over out from the top of his head? 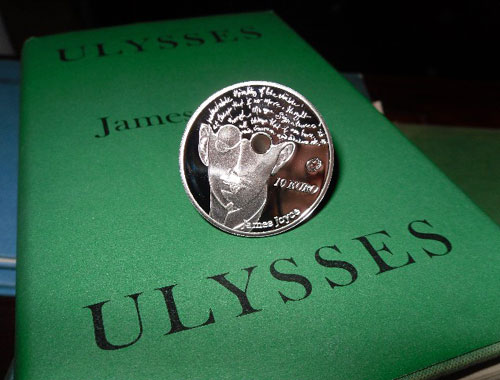 MA: When you were designing the coin, what was it for you that was the most obvious physical trait or something which you wanted to include in his depiction or “get across” on the coin?

MG: I wanted to “get across” his eyes, specifically the glasses because he had those fantastic spectacles which sometimes magnified his eyes and other times, they actually hid his eyes – which gave him a sort of internal looking vision. I felt it would be his eyes first, then he had that rather long wonderful face with his distinctive facial hair, the hairs almost having a life all their own and I wanted to make sure that they stood out, those were the main features I wanted to highlight, those were the main features which attracted me to his image in the first place.

MA: What is it that you would want someone seeing the coin for the first time to take away with them, their first or lasting impression?

MG: First, I hope they will just recognize the artist – the writer on first sight, that if they know only a little bit about James Joyce they will put the two elements together  – his writings and his face and understand a little more of Joyce. I think it (the design) has a simple and uncomplicated message.

MA: Do you think the coin might also convey something which perhaps we didn’t before know about him, the personality of James Joyce now that we see his image and perhaps read his work for the first time?

MG: It would be very gratifying to know that people who, after seeing the coin or buying it are doing just that because of some small work that I’ve done. The chosen theme wasn’t my own choice, that was up to the Central Bank but it’s worked out very well!

MA: I know readers will want to know a little something about the error which is now part of the coin’s lore, so to speak, but even though it has been pointed out that the coin carries a mis-quote regarding the passage from Ulysses, do you think it takes anything away from your conception of the design?

MG: No, I do not think that the error takes anything away from the concept of this design. I obviously wished it had not happened as I pride myself on my attention to detail as well as to grammar and spelling etc… when I write. But, everybody is fallible – that is a certainty.  And nobody who is human has never made a mistake.

MA: No, I don’t think the error takes anything away from your excellent design either, the collector will make up their own mind! I have to say, my first impression of the coin is very positive indeed, I think it’s certainly a candidate for a Coin of the Year award, Mary Gregoriy, designer of the latest Irish collector coin, thank you very much for your time today.

MG: Thank you for your kind words about the coin, you’re very welcome.

Post script… The Central Bank of Ireland released a short statement the day after the coin’s launch. In response to the error which was reported about the coin’s text by offering a refund to anyone collector who bought the coin beforehand, no one returned their purchase! My thanks go to Margaret Daly, Manager of the Collector Coin department – Currency Centre of the Central Bank of Ireland, for her kind assistance, it is greatly appreciated. Photos courtesy of Michael Alexander, © 2013.