The news that a new effigy of the Queen would be introduced by the Royal Mint this year made national news headlines in the UK as there hasn’t been this kind of change to British coinage since 1998. Michael Alexander of the London Banknote and Monetary Research Centre went to the unveiling to see firsthand the new portrait which will be included on British coinage from now on and to also speak with its designer, Jody Clark. 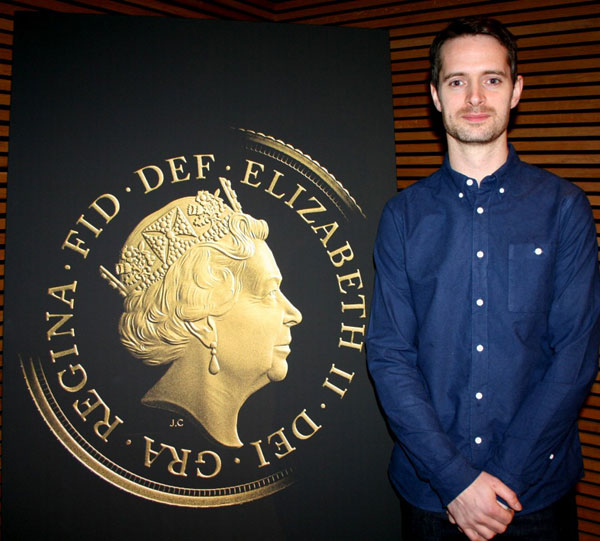 There is a curious aspect about the coins issued within a monarchy as opposed to that of a republic. And that is, with the changing of the monarch, the coins and in some cases the banknotes are likely to undergo substantial change. With regard to the coins, change would ordinarily take place on both obverse and reverse. However, take the case of the United Kingdom and the fact that one monarch has now occupied the throne for more than 63 years, a feat in itself where longevity is concerned for when the 6th September passes, the present Queen will have reigned longer than any other British monarch. With this in mind, there hasn’t been the same change in the coins because the head of state has remained. However, there has been some change in the appearance of the Monarch over time, in this case Queen Elizabeth II. Succeeding to the British throne in 1952 – still just 25 years of age, the Queen was first portrayed in 1953 as the young woman she was, laurel wreath atop her head and youthful features. Fast forward to 2015 and three further portraits have graced British and commonwealth coinage of many countries which has enabled the world to witness for all eternity, the progression of the young 25 year old Queen into a woman who many have come to feel has aged very gracefully into the 89 year old lady she is today. There has also developed a tradition for the Royal Mint to “update” the appearance of the monarch on the coin of the realm which seems to occur about every 15 or so years and on the 2nd March, we saw the unveiling of the Queen’s fifth definitive portrait which from now will be used on all British circulation and much of the commemorative coins for the foreseeable future. British coinage underwent significant change in 1971 when the nation transitioned from the old tri-level system of commerce consisting of pounds, shillings and pence to a decimal system of 100 pence to the pound. In 1968, in preparation for this substantial change-over, new reverse designs were prepared – along with a second portrait of Queen Elizabeth which has been regarded by many as the most elegant effigy and one not to be forgotten easily as the one pound, 20 pence, 2 pence and 1 penny coins which included this effigy are still to be found in circulation. These classic reverse designs, the work of Sir Christopher Ironside eventually transitioned themselves to smaller lighter examples of the denominations put into circulation in anticipation of the changeover to decimal coins and lasted an amazing 40 years until seven of the denominations, the one pound coin down to the penny were finally replaced in 2008 with a very clever concept of blending traditional with modern. The “puzzle design” or heraldic arms coins became well-known in the numismatic world for their innovative approach to coin design and remain very popular both in the UK and abroad.

Jody Clark, a talented engraver/artist at the Royal Mint took center stage during the launch to show off his work to the world, his own creation of the Queen’s effigy which sees her Majesty with what has already been described as having a “smile” or warm expression. At 33, Clark is the youngest ever artist to have his coin portrait chosen and is also the first Royal Mint engraver to have their work used for this purpose since 1902. Since embarking on his career at The Royal Mint in September 2012, Jody has worked on some notable projects such as the medals struck to celebrate the 2014 Ryder Cup and NATO Summit which was held in Wales and given to attending dignitaries as well as on commissions for Costa Rica, Tanzania, Lesotho and Azerbaijan. His celebrated contemporary interpretation of the iconic Britannia adorned the coin’s 2014 proof collection. During the unveiling, we had an opportunity to sit down and discuss the day’s events as well as the process of creation for such an important and history-recording event. I suspect we will be seeing a lot more of Jody’s work in the future so, as I usually say… watch this space for more information. 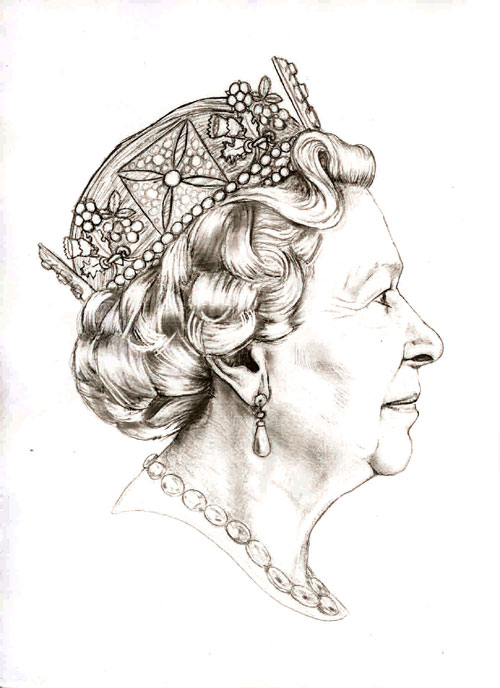 Jody Clark’s original sketch submitted to the Royal Mint Advisory Board which ended up as the winning design, note the addition of a necklace in the first proposal.

MA: First of all, congratulations on this accomplishment, This must be an extremely exciting day for you & your work which now join the ranks of Mary Gillick, Arnold Machin, Raphael Maklouf and Ian Rank-Broadley as far as British Numismatic history is concerned, how are you taking all of this in..?

JC: It’s very overwhelming at the moment, it’s going to take a while for it all to sink in, and take a few months when I actually see the coins in circulation for me to have it all really sink in. After winning the competition to design the commemorative 2014 proof Britannia coin last year, this is definitely the highlight of my career. It’s pretty hard to beat this now, I can’t really get any higher. 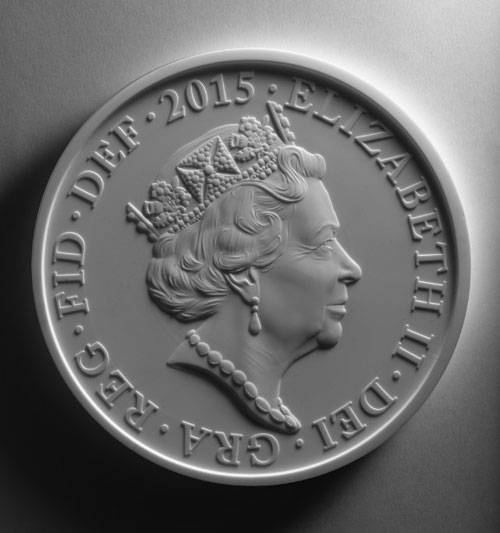 The plaster model which was created to include the placement of the legend and year of issue.

MA: Well, very few of us can know how it’ll feel to see one’s own design on the coins they spend on a daily basis, are you looking forward to the first time you see one of your coins in change..?

JC: Yes. I’m really looking forward to finding one in my change that’s perhaps been around in its own journey around the UK! There is going to be a competition with my colleagues to see who can be the first to find one in general circulation. 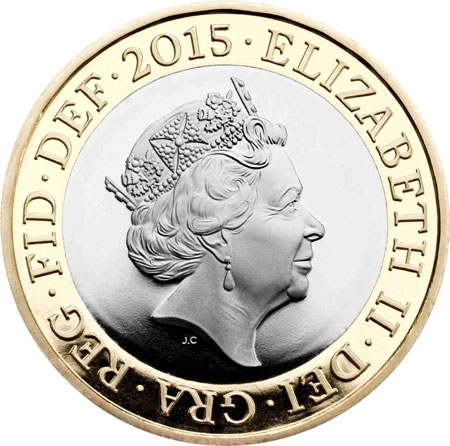 MA: This, the fifth numismatic portrait of Her Majesty has already been described by today’s assembled audience as very traditional and finely detailed, – was there any specific characteristic of the Queen that you wanted to feature above anything else & do you think you’ve accomplished this..?

JC: Just the likeness which was the main thing I wanted to achieve, an accurate representation, that’s what I had in mind from the start of the project. Also, I wanted to get the expression right…

MA:  Some have described her expression as almost smiling, was that an intention..?

JC: Not so much smiling as perhaps a warm expression differing from the last portrait. It was also hard to get the lettering surrounding the portrait right; in fact I probably spent almost as long on that as the portrait itself because it’s not my area of expertise. I took advice from an expert at the RMAC who made suggestions to enhance the design, like linking the letters at the bottom of the portrait.

MA: You and the rest of the country have seen the other four portraits used on British coinage, was there any element of those previous portraits which you took a bit of inspiration from..?

JC: I definitely studied the previous ones, I wanted my portrait to “work” almost as fitting into a set so to speak, I wanted it to work together with the other representations as well as on its own so I did have them in mind when I designed this portrait. I printed them all out for reference to make sure they all worked together as a set of effigies. That’s when I made the decision to include the same crown as Maklouf for consistency. 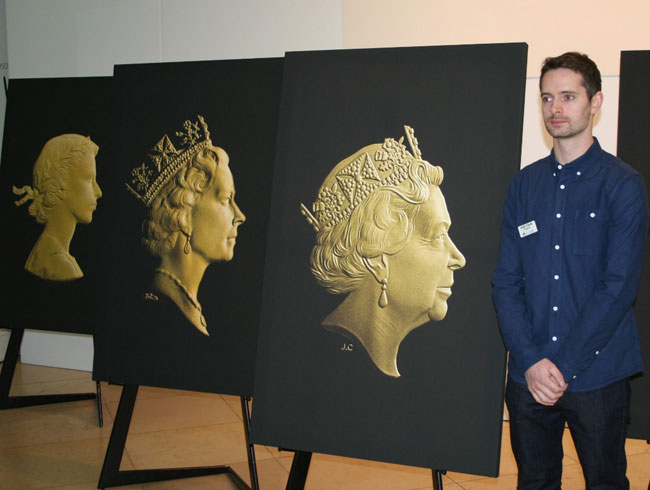 MA: As with any type of artistic portrayal, there is a little more of a challenge when depicting a living person, was there any special challenge you faced with this assignment, insomuch as “getting it right” with any aspect of the Queen’s physical appearance since you worked essentially from photographs..?

JC: Balancing her age with how she looks now, I didn’t want to “age” her too much because she really hasn’t aged since the last portrait was designed – I don’t think she looks much different so for me, it was portraying some age and not too much, I feel I got this right. It was challenging to get the features of the face, and details of the hair, right. I didn’t want to try showing her from a different angle because the side profile portrait is traditional, so you can’t stray too far. I originally included a necklace to balance off the crown, but was advised to try the design without it so I went for a sweeping neckline instead and think that improves it.

MA: When the “Heraldic Shields” reverse designs were introduced in 2008, there was a lot of comment about how the innovative design took traditional elements and meshed it with an entirely modern approach, how do you think your portrait will “go” with the present reverse designs..?

JC: I think they should work well, it’s a quite traditional portrait but it was produced using a digital sculpting method and perhaps that’s given it that bit of a modern “edge”. Both were produced in the same style and using similar software…

MA: then no need to change the reverse at this time..? 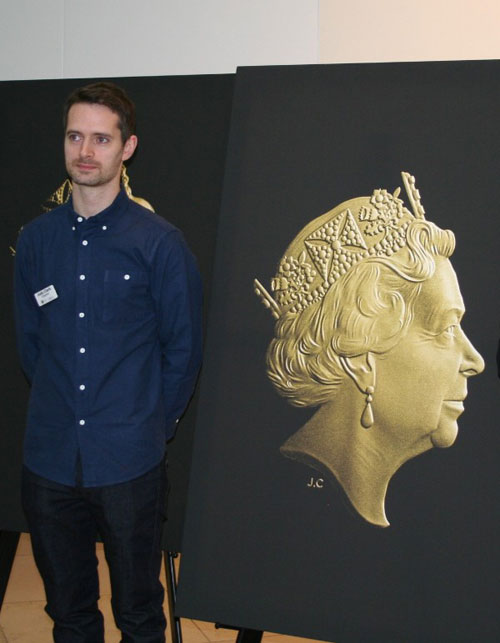 MA: It’s likely that your work will be the portrait which many people will remember as the pinnacle of the Queen’s coinage, is there something special that you as an artist would like people to see in this portrait and essentially “take away” with them – something you want to convey in your portrait about the Queen herself..?

JC: I didn’t want to convey personal ideas, I was really more concerned with creating a more befitting and accurate representation, that was the only real thing I had in mind at the time, but I suppose now, the “warmer” expression mentioned today may be what people will remember. Another thing is that I wanted to make her look more positive, with her head up.

MA: Speaking of the Queen, I understand your effigy would have needed her approval, do you know if she said anything about her new portrait and if so, can you share with our readers what she may have said..?

JC: I’ve not been in contact with anyone directly, all I know is that she has approved the design so I have to assume that she’s happy with it – no comment yet anyway and I haven’t met The Queen to hear what she thinks of it, but the design was approved by her office and I saw some good comments about it in an email from Buckingham Palace. 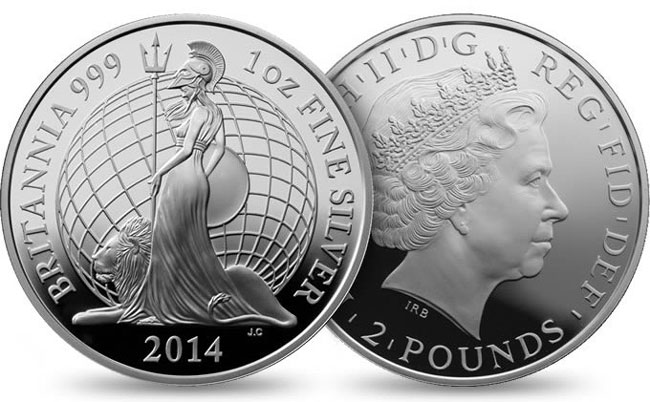 The 2014 Britannia proof design which Jody Clark designed, one of the more popular designs in the new annual series launched in 2013 depicting Britannia in different designs.

MA: This is a huge project in itself and its said that “you’re only as good as your last project” so, can you tell us what your next project is – where we can expect to see your next work after this launch..?

JC: Well, that’s up to the Royal Mint really, and what briefings they put in front of me, at the moment, I’m working on day to day projects…

MA: So, watch this space…Jody Clark, Royal Mint engraver and artist behind the country’s new coin portrait, thank you very much for your time today as the latest numismatic portrait of the Queen’s coinage is unveiled at London’s National Portrait Gallery

JC: Thank you very much!

My thanks go to the Press office of the Royal Mint for their cooperation and assistance in arranging this interview, it is greatly appreciated.