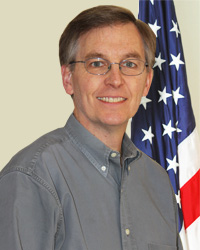 Erik Jansen is the most recent member to join the Citizens Coinage Advisory Committee (CCAC), having been sworn in on May 25th, 2011. He represents the interests of the general public in the coinage of the United States. He is the Chief Executive Officer and co-founder of a medical device firm in Mercer Island, Washington. Mr. Jansen graciously accepted my request to answer a few questions regarding his personal history with coin collecting, his initial impressions of the CCAC, and some thoughts on the U.S. Mint.

Getting a 1909 Lincoln in change when I was about 5 at a friend’s drugstore. No VDB though.

Pennies, nickels and dimes, like the rest of the allowance-limited kids. I do remember plucking buffaloes, liberty quarters and the occasional Walking Liberty half from my dad’s pocket change every evening. My real treasures was the half roll of Indian cents my dad gave me (he had plucked them from his dad’s store register when he was a kid in the depression).

I have the “Big Coin” envy like many mature collectors. So it’s halves and dollars. I can’t afford to collect gold. I had a period when I was pretty interested in 2-cent and 3-cent pieces from the Civil war and post war periods.

From my early Commemorative Half Dollar period, I have a few nice specimens of the more aesthetically pleasing issues.

They seem to be on the cusp of getting their order entry and fulfillment operations right. Some recent high surge demand items went pretty smoothly I read. And the Mint may always be criticized for offering too many products. But the Mint is charged with doing the will of Congress, the Federal Reserve and the Treasury. These three entities order it and the Mint delivers it. Pretty simple on the surface. But in many cases this leaves Mint decision makers with no discretion on the basic product offerings (especially bullion and commemoratives) . I’m not sure I can fix that. So I am investing my personal time to help cure a different issue: getting the artistic content in our coinage and medals up, accurate and exciting. This necessarily means making sure the artistic design staff has a powerful seat at the table when the Mint starts a given design. That appears to be happening as I write. The CCAC plays a part by helping put some highly motivated and skilled independent eyes and minds on the multitude of designs that compete for every coin or medal that goes to production. So I think that if we can get order entry and fulfillment right, further streamline (where possible) the product lines and raise the artistic appeal of the product, we will have done a lot for the collectors (of which I am one).

Basically, I answered an ad in the paper. Not literally, but practically. Honestly, for a long time I had watched the numismatic press and the ccac.gov website to learn what the CCAC did. When I saw that there had been press releases in the past announcing open seats (which we filled by the names and faces on the CCAC site), I watched until one of the public seats come open. At that point, I rallied my resume, wrote a cover letter that I hoped echoed my enthusiasm and what I saw as my qualifications. Then I mailed it off as instructed in the press release. And then I waited and waited and waited. A few months later was asked to interview at the Mint offices in DC. A few months after was fortunate enough to receive the official invitation. I have only been involved for a month at this point, but I strongly encourage others to try my path – or discover your own as you read and watch and get sharp on the CCAC.

First, in my short tenure on the CCAC, I have observed two things that truly matter the most: the members exude commitment and competence. It seems every member of the team has a depth or specialty(s) – casually or professionally, intentionally or coincidentally – that figures into vetting a given set of designs that have been submitted for consideration. Whether it is the historical context of the coin, physical practicalities (will a design perform as a production die?), how to best use relief for effect, artistic clash vs. balance for example. One has to ask, with eleven members on the panel plus a healthy number of mint staff professionals, is it even possible to get anything done? I have seen this group evolve very tricky issues, work through them and resolve the situation – in a reasonable amount of time and a single meeting. It seems that no one is shy about sharing their views but there is a ton of respect. None of us gets paid for doing it. We love it.

There has been a lot of talk about where the CCAC “fits” in the design and selection. Well, if the goal is most attractive and effective designs that reflect all the good things of this country, I believe the new operating flow (that was drafted before I was invited on to the team) has it right. In order to get the most from the artistic and medalic skills that go into the process, the many parties (including the CCAC) must be integrated in a holistic flow. Now this is a large leap for an organization as significant and legacy ridden as the US Mint. I am most impressed with the Dick Peterson, the Acting Director. And he appears to be embracing the plan written by a committee of the CCAC last year. At 60 pages, it’s not light reading (see it here), but it lays out this integrated design approach. Where will it go and what will it yield?. Stay tuned. Personally, I like seeing it as I believe with every design pursued together, the next one is even better – incorporating more design risk and clarifying unknowns earlier in the process.

This reporter is very grateful for Mr. Jansen’s time, and I wish him and the CCAC much success in its endeavors.