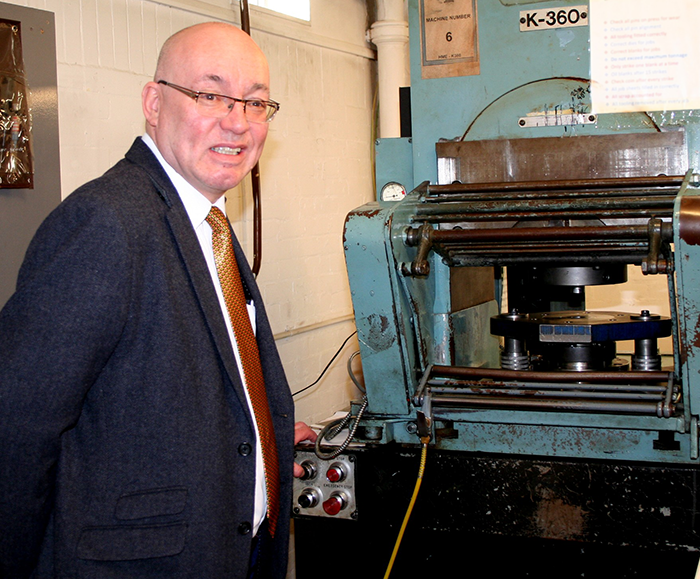 Colin Campbell stands next to the minting press and strikes the second 2017-dated Isle of Man coin during the striking ceremony. (Images © LBMRC UK & M Alexander 2017)

The coins of the Isle of Man have become some of the best-known issues with foreign coin collectors, who would have at least one piece included in their treasured collections. The journey to this level of esteem in the numismatic world has taken decades. As the Isle of Man embark on a brand-new phase of coin issues with new designs, a new mint, and exciting upcoming projects, Michael Alexander of the London Banknote and Monetary Research Centre speaks to Colin Campbell, investment and banking manager on behalf of the Isle of Man Treasury, about this journey and what’s in store for avid Isle of Man coin collectors.

Modern coin issuance for the Isle of Man began with the changeover to decimalisation in February 1971, but their coinage history spans well before this date. For many, the Isle of Man was put on the map with the issuance of a prolific and steady number of coins, ranging from base-metal circulation strikes which mirrored the coins of mainland Britain to distinctive crowns, gold and silver collector pieces, bullion, and an array of commemorative coins. The latter also gave prominent attention to landmarks on the small island territory situated between Great Britain and Ireland, and to events and historical dates. In 2016, the Isle of Man Treasury announced it would be initiating a change in the appointment of a new mint, which would mean not only changes in designs but also the start of new numismatic projects. 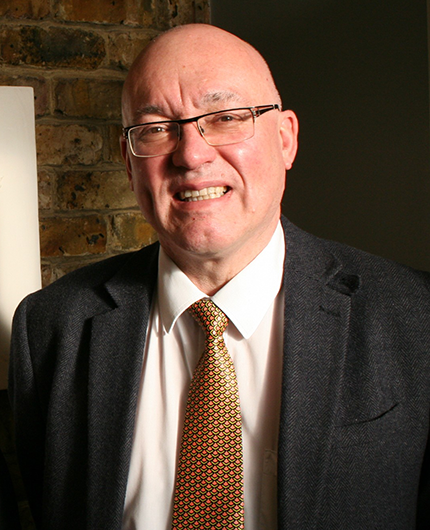 March of this year saw the first-strike ceremony held at the Tower Mint, who were appointed as the new official mint of the Isle of Man from the 1st April, and whose production facilities are located in London. The coin chosen for the first strike was a new commemorative 50-pence coin which celebrates the 150th anniversary of direct elections to the island’s legislature, known as the House of Keys. Present for this ceremony were Colin Campbell and Paula Primrose, chief accountant of the Isle of Man Treasury, along with invited guests and new partners who will be responsible for marketing and retailing upcoming new coins to collectors. These coins, with their very impressive reverse designs and new effigy of HM Queen Elizabeth II, have been described as exemplary and innovative in terms of their design and their references to wildlife and landmarks long associated with the Isle of Man. A new circulation-type £5 has been introduced which has already become a “must-have” with dedicated Isle of Man collectors. Further collector and commemorative coins are planned for 2017, and the Isle of Man Treasury are planning new and exciting changes to existing subjects which have become familiar and favourite with collectors. It was announced that the appointment of the Tower Mint will last for a period of 10 years—and if the initial issuance of the new 2017-dated circulation and commemorative coins is any indication of what’s in store for collectors, the next years will certainly prove to be as innovative and interesting. Watch this space!

Michael Alexander: It’s been quite a year for the Isle of Man Treasury especially with the appointment of the Tower Mint as producers of Isle of Man coinage from 2017. Having had a look at the new coins, I have to say the designs are great—very bold with strong representations of Isle of Man history and culture. How did the Treasury and Tynwald react to them when they were first seen?

Colin Campbell: I’m pleased to say the response by everyone who has seen the new designs of the 2017-series coins has been extremely positive. The immediate reaction by all concerned echoed your thoughts, too, in that the designs are distinctly Manx—and the Celtic and Viking themes that run throughout the set helps to emphasise this. The fact that the Isle of Man are going to be the first territory to use the new Crown and dependencies portrait or effigy of the Queen, who is known as Lord of Man, is also very exciting for us, so with these two great changes brought together, I hope the new coins will be very popular with collectors of Isle of Man coinage.

MA: There are going to be some significant changes on the British mainland as far as a new 1-pound coin is concerned—will this change include the Isle of Man, and can you clarify if there are going to be 1- and 2-pence coins in the new series for 2017?


CC: Yes, significant changes to mainland coinage with the issue of their new 12-sided, bi-metallic pound. I can indeed confirm the Isle of Man treasury will continue with our “round” pound. As we do not have the same problem here as the mainland has with counterfeit 1-pound coins, the decision was made to retain the current specifications for the new series which begins this year. I can also confirm the new series of coins does not include 1p or 2p coins, and whilst I’m sure this may be viewed as disappointing from a collector’s perspective, the reason behind the decision was that it is more practical and cost effective to the IOM government Treasury not to produce these two smaller denominations.

MA: A bit of history here, Prior to the early 1970’s, there were no circulation coins in the Isle of Man. Can you explain to my readers what the reasons were behind the decision after such a long time to issue coins for the island?

CC: The Isle of Man did actually have circulation coins many years ago. Our first “circulating coins” were issued back in 1709 but discontinued in the 1800’s, mostly due to the fact that there was a profit to be made by taking IOM coins from the island and redeeming or spending them on the mainland. Years later, the government then applied for and were granted approval to issue circulating coins from the 15th February 1971, which was the official day of decimalisation on the mainland. We issued six coins from 50 pence to the 1/2 penny, conforming to the same specifications as U.K. coins, and I’m sure collectors remember these coins fondly, which I understand have now become highly sought after and collectable.

MA: These new series of coins are the result from when the Treasury announced in 2016 that a new Mint would be responsible for the production of Isle of Man circulation coinage and collector coins—what was behind the announcement for a new mint to carry out this work?

CC: It was very simple really. Government requirements change over the years, and one of the rules for the appointment of suppliers to the Isle of Man government now state that a tender exercise [i.e., an invitation for bids—Editor] should be completed every five years, unless a special exemption is granted. The tender for a mint was long overdue but because of the special nature of the type of supplier—in this case the supply of coinage—the tender was delayed until last year, when a new mint was successful with a winning bid. And for the same reason I mentioned about the special nature of the supplier, this new contract has been extended to a 10-year term.

MA: There were a lot of questions at the time as to why an association which began in 1974 was being ended after so many years—can you add any additional information as to the reason to change mints?

CC: I would like to add that one of the more important pre-requisites on the appointment of a new mint was to submit designs for a new set of decimal coins. The new mint chosen has accorded the Isle of Mint Treasury the ability to embark on a new relationship which also provides an opportunity for us to explore fresh ideas for both circulating and commemorative coins in the coming years.

MA: Collectors have asked if any of the ongoing series will be continued or transition over to the Isle of Man’s new minters—such as the cat crown, the bullion series, or the TT [Tourist Trophy, an annual motorcycle race—Editor] and Christmas 50-pence coins, some of which became traditions for collectors—or does the Treasury have plans for entirely new projects?

CC: As you know, with a change-over such as this, we can confirm there will be no re-issuing of coins using the existing dies as they will be destroyed. However, it is entirely possible that at some stage, the older or traditional, popular designs or series will be re-visited, and this of course would mean updated designs. There are a number of new coin series for the Isle of Man in the planning stages which I’m pleased to mention will include bullion-type coins, a few of which have already received political and or royal approval. The Tower Mint, which was named as the Treasury’s official mint effective from the 1st April 2017, has produced a coin plan/strategy for the next few years which is exciting for all parties involved. Our first new collectors’ circulating coin for 2017 is a new 50-pence piece which was the one being struck during today’s ceremony. It marks the 150th anniversary of the Tynwald’s first elected members of the lower house and will be issued later on this year—it’s a wonderful design. 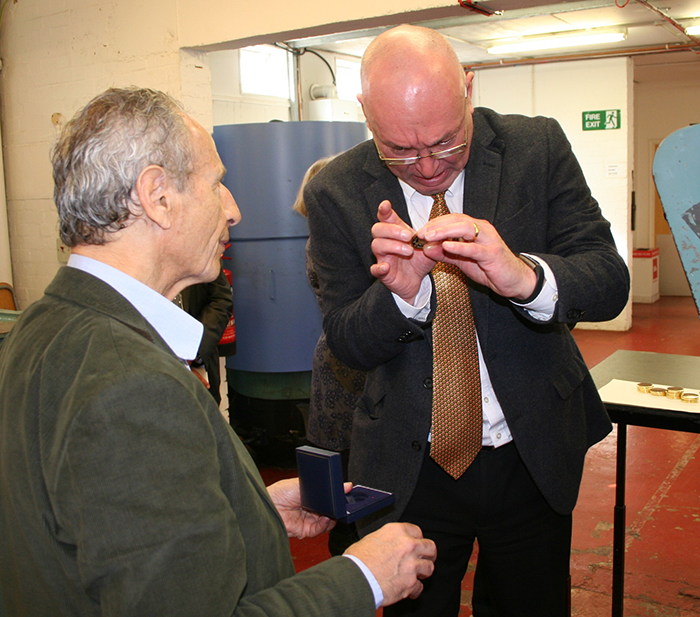 Colin Campbell inspects the new coin along with Raphael Maklouf, chairman of the Tower Mint.

MA: Before the introduction of Isle of Man coinage, I think it’s safe to say that hardly anyone outside of the British Isles knew where your country was. Do you think the coins were somewhat helpful in literally putting the Isle of Man on the map for a wider audience—has this helped the country, or has it been the opposite?

CC: I’m proud to say the Isle of Man was known internationally long before the reintroduction of Manx coinage, for the famous TT motorcycle races for example, and for having the world’s oldest continuous parliament, Tynwald, which dates back more than one thousand years to Viking times. However, the coinage has definitely helped to highlight the island’s unique political and cultural identity as a Crown dependency. I do hope the coins continue to do their part in creating interest in our country, which is why they are so important to the government and Treasury.

CC: Yes, that’s true, the Isle of Man was synonymous with a prolific issue of a wide range of collector and commemorative coins. It is hoped that our new relationship with the Tower Mint and their plans with its various marketing partners will prove popular with numismatists the world over. I don’t think collectors will be disappointed with the new plan for collector coins—we’re approaching this as essentially a brand-new phase of Isle of Man coinage, with exciting new products, designs, and themes.

MA: I’ve often been asked by many collectors over the years, “Does the IOM Treasury actually make money by issuing so many collector coins?” Which has been somewhat difficult to explain in a few words—so, my question to your department is, has this decades-old programme of issuing many collector coins been a successful or a money-making venture for the Treasury?

CC: It’s actually a rather uncomplicated concept: the Isle of Man Treasury simply receives a small royalty payment for each collector coin sold aside from the value of the coin’s stated denomination, which is also deposited into the Treasury. Although the royalty payments are modest, the details of the remuneration over the years are shown in the Isle of Man published accounts which are made public for anyone interested or who want additional information on the subject.

MA: As a collector myself, I’m looking forward to the new projects your department will be launching in the coming months. It was my pleasure meeting you today at the first-strike ceremony, Colin Campbell, investment and banking manager on behalf of the Isle of Man Treasury. Thank you for your time today.   ❑