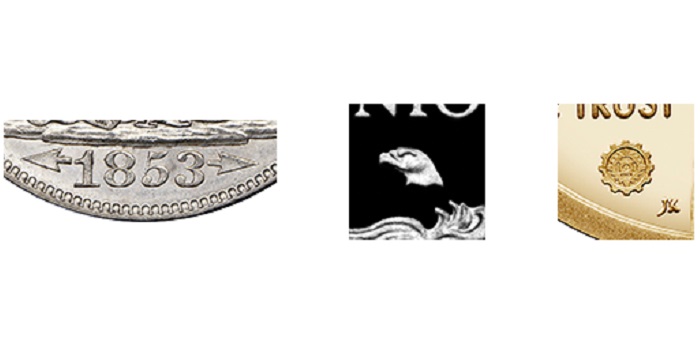 This year the U.S. Mint will issue circulating coins and other numismatic products that feature a privy mark honoring the 75th anniversary of the end of World War II. A privy mark, in general terms, is a symbol that communicates information about a coin’s production.

Countries around the world have used privy marks for centuries. In the past, privy marks were used to identify the mint or moneyer that made the coin, the artist that designed it, or to represent other aspects of the coin’s origin. More recently, mints use the marks to commemorate events and for other marketing purposes. Many countries now recognize the mint through an alphabetical mint mark rather than a pictorial privy mark. 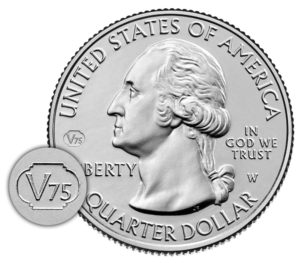 In the 19th century, the U.S. Mint used arrows on coins to signal a change in the way coins were made. Although records don’t refer to these arrows as privy marks, the symbols did serve the same function by communicating information about production. In 1853, the Mint temporarily reduced the weight of silver coins. From 1853 to 1855, silver coins featured arrows on either side of the date to indicate the weight change. The Mint removed the arrows when the weight returned to its previous amount. The weight increased in 1873 and 1874 and again, the Mint used arrows to communicate that.

The 2019-2032 American Innovation $1 Coin Program will include a different privy mark each year. Since the concepts and themes will vary throughout the program, the intent of the mark is to unify the designs. The 2019 coins featured a stylized gear privy mark on the obverse to represent industry and innovation. Mint medallic artists based the mark on the 2018 introductory coin reverse design, which depicts gears.

Watch this video for detailed views of the National Park of American Samoa and Weir Farm National Historic Site quarters made at the West Point Mint and featuring a special privy mark.

To read the rest of the article, please click here.