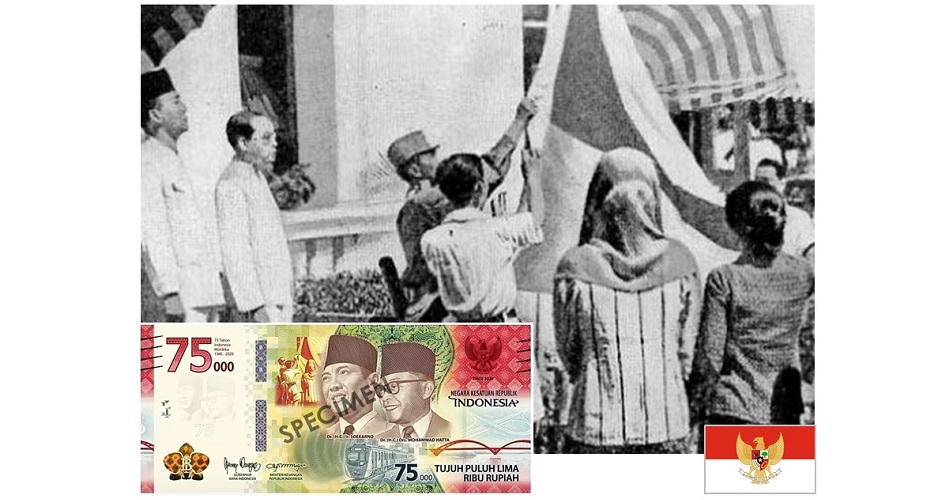 The Bank Indonesia has issued (17th August) new commemorative banknotes with a face value of 75,000 rupiah (U.S. $5.04), which are in celebration of the 75th anniversary of independence, celebrated on the day of the notes’ issuance. Achieved in 1945 from the Kingdom of the Netherlands at the end of the Second World War, the former colony of the Dutch East Indies, or “Netherlands Indies,” as they were once known, emerged as an independent nation after Japanese occupation was effectively ended. The Republic of Indonesia is a multi-cultural, multi-racial, multi-ethnic, multi-linguistic, and multi-religious nation of more than 265,000,000 people living on more than 17,500 islands just north of the continent of Australia.

Currently, more than 700 living languages are spoken in Indonesia, which indicates that Indonesia has about 10% of the world’s languages, thus establishing its reputation as the second most linguistically diverse nation in the world after Papua New Guinea. Indonesia’s official (or working) language is Javanese, which is the most widely spoken language by the number of native speakers. With 633 recognised ethnic groups in Indonesia, the vast majority of those belong to the Austronesian peoples. This makes Indonesia one of the most diverse nations in terms of ethnicity as well. However, the largest ethnic group in Indonesia are the Javanese, who make up about 40% of the total population. A significant number of Chinese migrated to Indonesia over the years, and many Indonesians claim some degree of European heritage, most of this being Dutch due to the country’s former colonial status. Indonesia has the largest Muslim community, with 87.2% of the Indonesian population identifying themselves as Muslim. As such, Indonesia has the largest Muslim population in the world, with approximately 225 million faithful. Christianity is Indonesia’s second most practised religion, with just over 28 million faithful who are members mostly of the Dutch Reformed Church equating to just over 10.8% of the population.

Today, tourism is one of Indonesia’s most significant contributors to its very diverse economy, with nearly 16 million visitors recorded in 2018 from all over the world but primarily from America, Europe, and Australia. Aside from visiting the many isolated, idyllic islands, many tourists visit Jakarta. On the northwest coast of the world’s most populous island of Java; it is the centre of economic, cultural, and political life in Indonesia with a population of 10,770,487, as of 2020.

The banknotes are produced by Perum Peruri, the Indonesian state banknote/security printers and mint headquartered in Jakarta, on behalf of the Bank Indonesia. The new commemorative banknotes are predominantly red in colour and multi-coloured measuring 151 by 65 millimetres and printed on a 100% cotton-based paper fibre. The face side features two portraits. The first is of Indonesia’s first President Kusno Sosrodihardjo, widely known as Soekarno, who was in office from 1945 until 1967. The second portrait is of Dr. Mohammad Hatta, who served as the country’s first vice-president until 1956. To the left of the two portraits depicts Indonesia’s very first flag-hoisting ceremony during the country’s Declaration of Independence on the 17th August 1945. Below the president and vice president’s image are representations of train travel and bridges, symbolising many Indonesians on the move throughout the country through its sophisticated infrastructure.

The back side depicts nine youngsters, all from many different parts of Indonesia, wearing traditional attire and representing the varied cultures and peoples making up the demographic of Indonesia. Above their images is a representation of the country as seen on the map, as well as a satellite which was launched as part of the country’s extensive space programme.

Security features for the new banknotes include:

Watermark: The two portraits shown on the front side are visible as a watermark which is situated to the left half and visible when the note is held up to a source of light.

Holographic strip: A vertical strip located to the right of the watermark field included a holographic element with a moving pattern when the note is tilted.

Colour shifting application: An application of colour shifting is placed below the watermark field and is in the shape of a stylised Melati putih or Jasmine flower, Indonesia’s national flower. The application shifts from iridescent gold to green when the note is tilted.

Tactile markings: On the edges of the upper right and left on the obverse or front side are four sharp lines which can be felt by the fingertips enabling visually impaired persons to identify the note.

The Bank Indonesia has confirmed that 75 million notes will be printed and distributed for the occasion, with the banknotes being available from an official distributor by online ordering. Residents who made their purchase online can obtain their bill at Bank Indonesia branches across the country, starting on the 18th August. The purchase is limited to one sale per customer. For additional information about the rupiah coins and banknotes in circulation, please visit the website of the Bank Indonesia.