On November 13, 2012, the United States Mint sold out of the individual option for the 2012-W Proof Silver Eagle. Despite the sell out, collectors still have other options available for purchasing numismatic 2012 American Silver Eagles and may even see a come back for the sold out coin within an upcoming product. 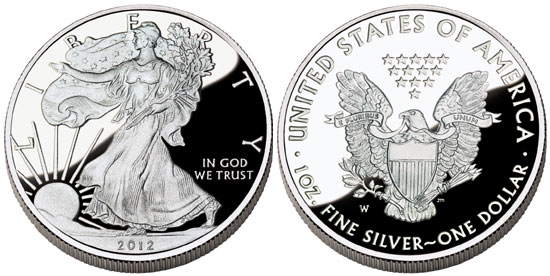 The US Mint began sales of the 2012 Proof Silver Eagle containing the “W” mint mark on April 12, 2012. On that date, the individual proof coin was available priced at $59.95 with no stated maximum mintage and no household ordering limits imposed. Opening sales figures for the product reached 299,539 units, representing somewhat of a slow down from the prior year.

Following a decline in the market price of silver, the product price was reduced to $54.95 in late July. This allowed collectors with a window of opportunity to take advantage of a lower price. After the price of silver recovered, the price of the coin was raised to the original $59.95 in October. 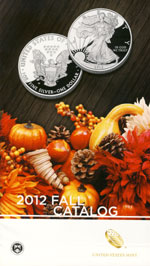 As one of the US Mint’s most popular numismatic products, many might have been looking forward to purchasing the 2012 Proof Silver Eagle to give as a holiday gift. In fact, the US Mint prominently featured an image of the coin on the cover of Fall Product Catalog, which was distributed to collectors last week.

Despite the sell out of the individual proof version, other products remain available which contain numismatic versions of the American Silver Eagle. There also seems to be a possibility that the 2012-W Proof Silver Eagle may make another appearance within a future product.

Looking slightly ahead, the US Mint has scheduled to release the 2012 Limited Edition Silver Proof Set on November 27, 2012. Although final product details are yet to be confirmed, there have been reports that the product will contain the 2012-W Proof Silver Eagle, along with 90% silver proof quarters, a half dollar, and dime. Pricing for the product was recently published at $149.95.