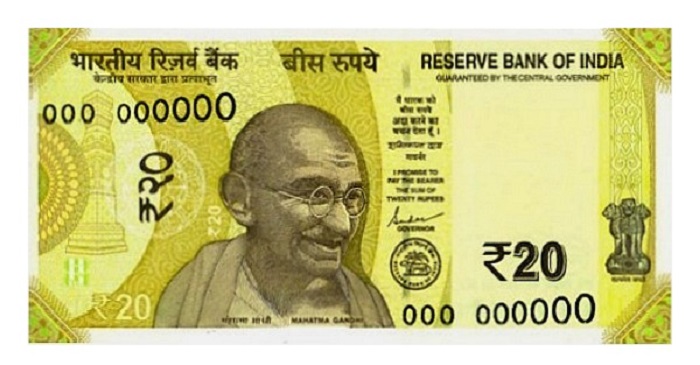 The Reserve Bank of India (RBI) has announced (26th April) they will shortly issue the new ₹20 denomination banknotes (U.S. $.029) which will be part of the current and second Mahatma Gandhi series that was first begun in 2017. This particular denomination will be issued including the signature of Shri Shaktikanta Das, governor of the RBI.

The new note, which is described as greenish-yellow in colour, features a portrait of Mahatma Gandhi, whose image was first introduced onto Indian banknotes in 1996. The second “Mahatma” series also includes the symbol for the Indian rupee, “₹,” after the numeral denoting their face value, which the Reserve Bank introduced to the Indian public in July 2012. 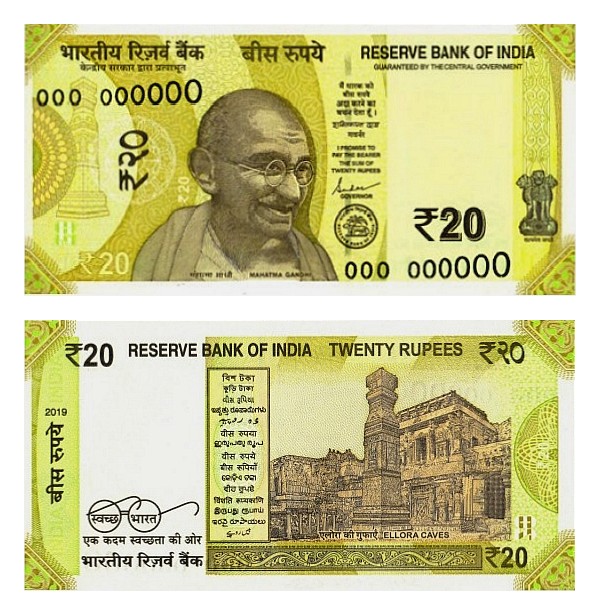 In keeping with the revised series, the second issue of the 20-rupee has been reduced in size from the previous dimensions and now measures 129 x 63 millimetres. The new note depicts the Mahatma on the face, with his portrait now positioned towards the centre and facing right. To the left of the portrait is the Devanagari rupee symbol and numeral ₹ २०. To the right of the portrait are the note’s watermark field and the name of the authority, along with the seal of the Reserve Bank of India and the denomination of ₹ 20. There is also a segmented, windowed, de-metalised security thread with inscriptions भारत’ and RBI seen vertically. The state emblem of the Ashoka is placed to the right edge of the note. The serial numbers, which graduate from smaller to larger sizes, are positioned to the upper left and lower right of the note on the face.

The theme of the second Mahatma series focuses on the country’s cultural heritage, and, as such, the 20-rupee denomination features a motif of the Ellora Caves on the back. A UNESCO World Heritage Site located in the Aurangabad district of Maharashtra, India, they are one of the largest rock-cut monastery-temple cave complexes in the world and features Buddhist, Hindu, and Jain monuments and artwork dating from the 600-1000 CE period. The year of issue, 2019, is included to the left of the field of the watermark, and an image of the Mahatma’s emblematic spectacles is seen below the watermark field, along with wording in Devanagari. To the right of the watermark, a panel of text is included which shows the note’s denomination in several different official languages prevalent in India. On the four corners shown on both sides are geometric patterns aligning with the overall colour scheme.

The Reserve Bank of India has advised that all ₹20 banknotes issued in the previous series will continue to be legal tender and co-circulate with the new versions once they are released into circulation until further notice. For additional information about this banknote and all other banknotes in the new “Mahatma” series from the RBI, please visit their website.