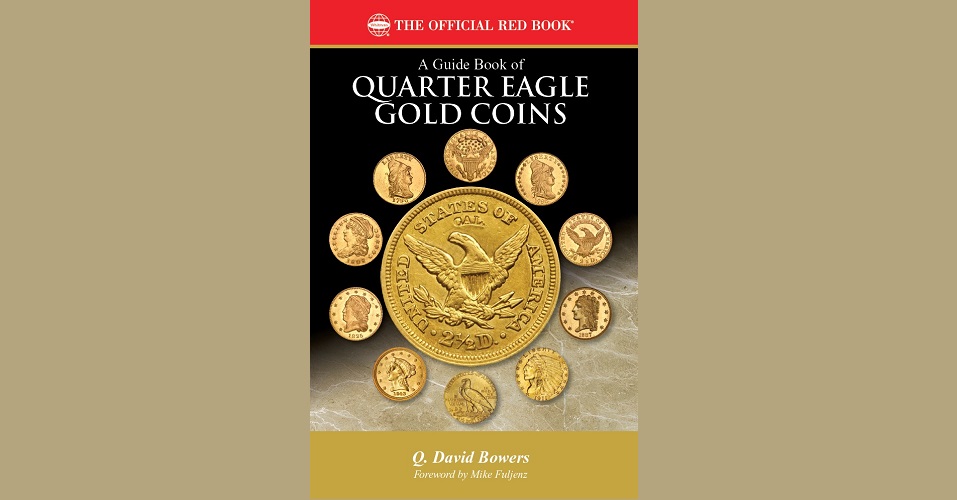 The Guide Book of Quarter Eagle Gold Coins is volume 26 in Whitman Publishing’s “Bowers Series,” and the 20th volume in the series written by Q. David Bowers himself. Hover to zoom.

The latest Whitman Publishing book by Q. David Bowers will debut in March 2022. The 448-page Guide Book of Quarter Eagle Gold Coins will be available from bookstores and hobby shops and online, and in the meantime is available for preorder. Here, Whitman publisher Dennis Tucker describes how the book came to be, and why it was undertaken in the first place.

In the 60-plus years Q. David Bowers has been studying the gold coins of the United States, he has examined countless related periodicals, read more than 5,000 numismatic catalogs, and consumed every available reference on the subject. Beyond this “book learning” he has personally studied hundreds of thousands of gold coins, and has cataloged many of the most famous coin collections ever sold.

Dave became a professional numismatist and coin dealer in the 1950s, when he was a young teenager. Back then gold coins weren’t often seen in the hobby community. In his local coin club, even the older members rarely brought them in for show-and-tell, or to sell. Since the 1930s, Great Depression–era orders had legally restricted “hoarding” of such precious-metal coins (although collectors could keep gold pieces of numismatic significance, and personal exemptions allowed any American to own a reasonable face-value amount). Those federal restrictions would abide until the early 1970s.

Starting with the Bicentennial gold-medal program, Congress and the Treasury Department would tinker with mass-market distribution of federal gold products, including the trial-and-error exploration embodied by the American Arts gold medallions and, finally, the debut of the nation’s first widely successful gold-bullion program, the American Eagle coinage of 1986 to date. Today, Americans find it easier than ever to buy, sell, and trade gold coins. This includes numismatic offerings such as commemoratives, Proofs and Reverse Proofs, high-relief gold medals, and other collectibles.

Classic pre-1934 U.S. gold coins, too, are now easy to study and collect. Many factors contribute to this. 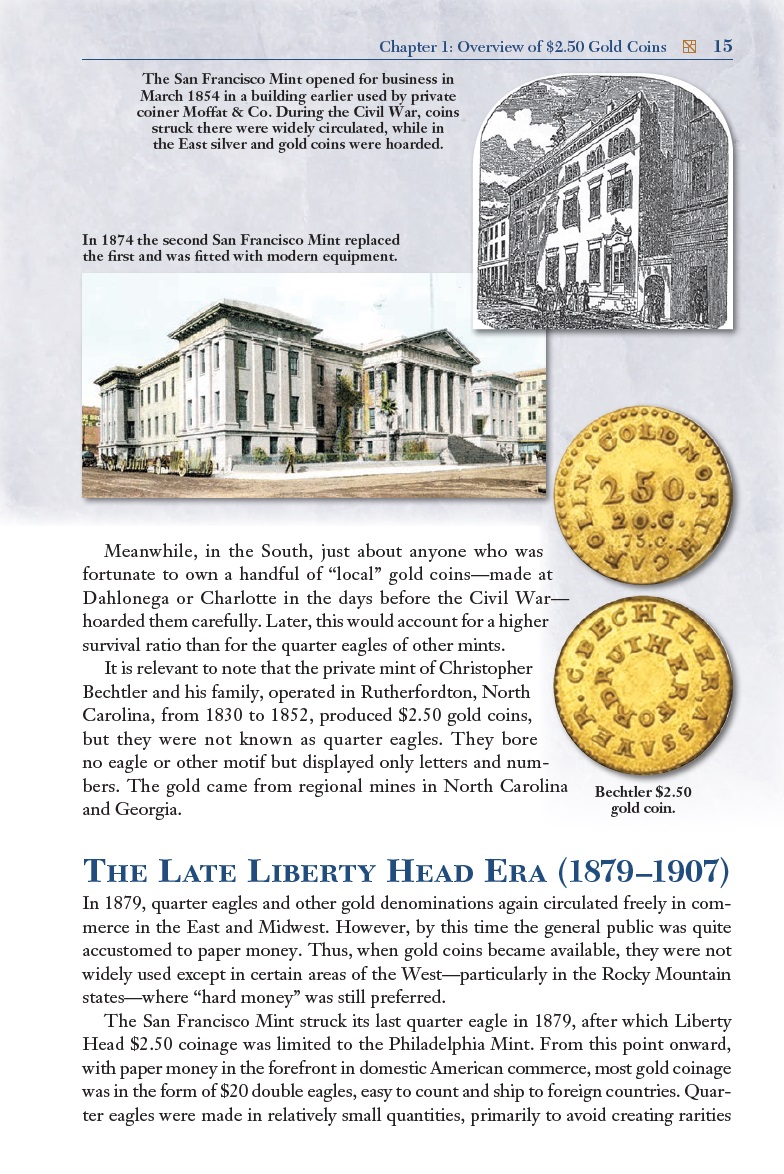 Bowers lays out the historical context of the nation’s $2.50 gold coins back to the late 1700s.

A couple years ago I made an informal poll of 100 hobbyists. I found that roughly 10 percent identify themselves as “very active” collectors of gold quarter eagles—e.g., constantly upgrading their sets, competing in registries, cherrypicking or collecting by die variety or die state, and/or holding membership in a dedicated group such as the Southern Gold Society. 20 percent were more casual, collecting quarter eagles (including in type sets) but not as their primary hobby niche. The remaining 70 percent were split evenly between those who own some of the coins but don’t consider them a carefully assembled collection; and those who neither collect them nor own any. 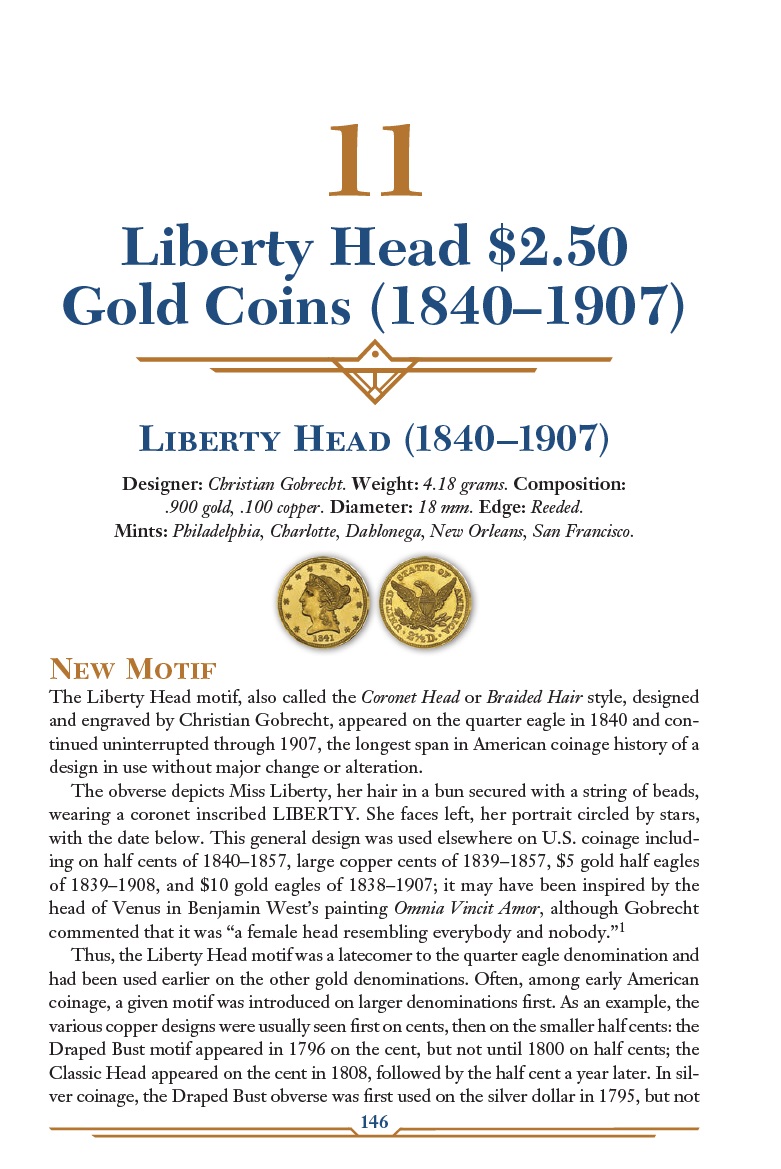 Each coin, date by date, is given a full study of its mintage, quantities surviving today, strike characteristics, auction records, values, and other important factors.

I found it interesting that two-thirds of these collectors owned quarter eagles and/or collected them either actively or casually. Comments included: “I have about a dozen examples of genuine and counterfeits. Now I only collect the fake ones.” “My main area of collecting; love them!” “Yes, with a focus on Dahlonega issues. I am always on the hunt for the die and mintmark varieties of the 1839-D, 1841-D, 1843-D, and 1846-D/D.” “No dirty old gold here! I collect the 1900–1907 Liberty Head quarter eagle short set in CAC-approved high grades (66/67). Love those little glowing gems!” “I collect Indian Head quarter eagles—just a date set, though. The ‘11-D is out of my league.” “I pretty much exclusively collect gold quarter eagles. My primary focus is a date run from 1796 to 1834, including Red Book varieties. Only 6 coins to go of the 24 needed. I’ve been at it for 10 years. I also collect ‘cool’ Classic and Liberty Head quarter eagles.” “I’m plugging away at a set, albeit very, very slowly. All are PCGS VG-8 or lower. Something special about gold lowballs.” “Love them: By decade, by type, by mint.” “Have a complete set of Indian quarter eagles—minus, surprise, surprise, the 1911-D.” 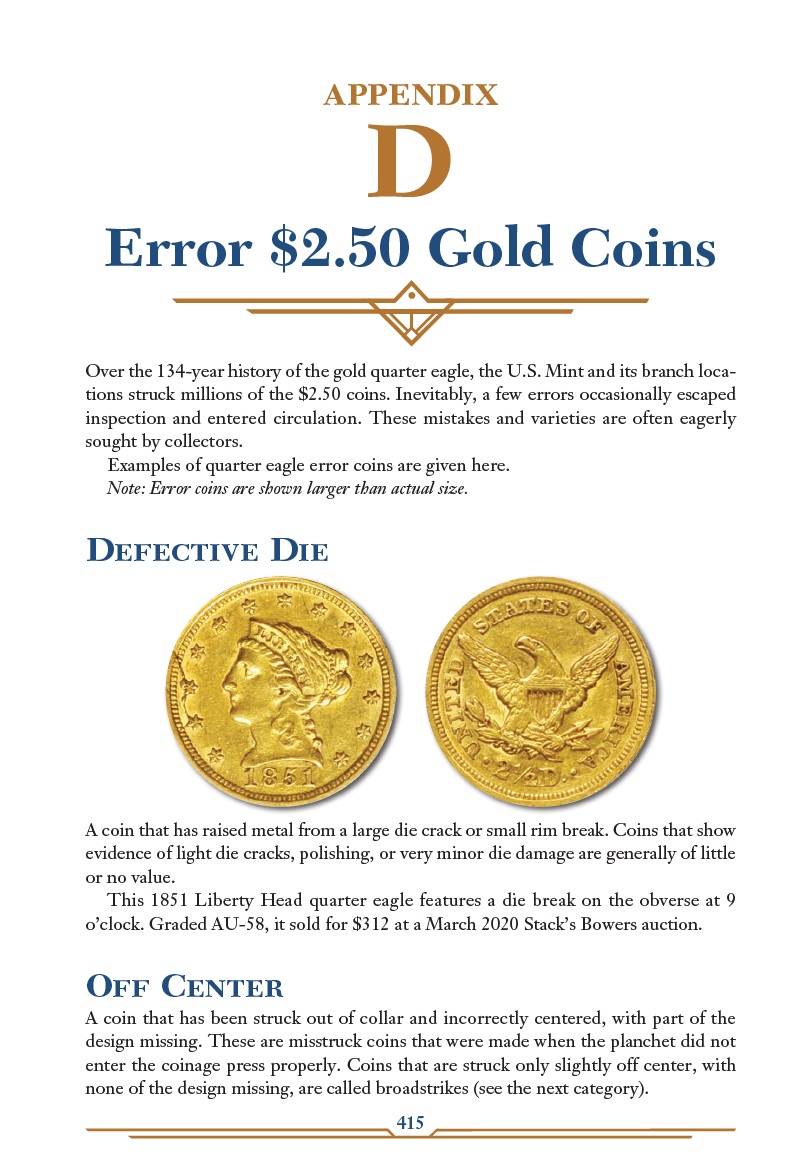 The new book covers every quarter eagle type from the Capped Bust, first minted in the 1790s, to the Indian Head, last minted in the 1920s, plus related topics such as counterfeits and error coins.

In the 1950s this level of interest and excitement over gold quarter eagles was nowhere to be seen. It was decades in the future.

When Dave Bowers started in the hobby in the 1950s, books about gold coins were even rarer than the coins themselves. Researcher Walter Breen wrote a 24-page monograph on gold dollars in 1964. In 1975 numismatist David W. Akers, after spending more than 20 years researching gold coins (dollars in particular), published United States Gold Coins: An Analysis of Auction Records, Gold Dollars. Over the next seven years, Akers compiled volumes covering every U.S. gold coin series. In the meantime, Breen, too, continued to write monographs on other gold coins (up to the $10 denomination, published in 1967), and included gold coins in his two encyclopedias published in 1977 and 1988.

In the midst of this activity, Q. David Bowers emerged as the preeminent author on U.S. gold coinage—a position he holds to this day.

Bowers’s History of United States Coinage, As Illustrated by the Garrett Collection, published in 1979, included his analysis of the nation’s gold coins. In 1982 he published United States Gold Coins: An Illustrated History. His numismatic history of collecting U.S. gold coins was released as part of the proceedings of the 1989 Coinage of the Americas Conference. In various other books of the 1990s and early 2000s, plus hundreds of articles and columns before and since, he’s shared stories and insight on U.S. gold coins.

In 2003 Bowers joined forces with Whitman Publishing, longtime publisher of the Red Book and other hobby books, signing on as the company’s numismatic director. This collaboration has led to a boom in American book publishing in the field of numismatics. Whitman publishes an average of one new book either entirely or substantially about gold coins every year, ranging from popular single-denomination guidebooks to (also popular) 650-page encyclopedias. The first came out in 2004: Bowers’s Guide Book of Double Eagle Gold Coins was the first book to cover the entire spectrum of the $20 denomination since David Akers’s 1982 volume on the subject. Among the more recent are Gold: Everything You Need to Know to Buy and Sell Today (by Bowers and Jeff Garrett, first published in 2010); Lost and Found Coin Hoards and Treasures: Illustrated Stories of the Greatest American Troves and Their Discoveries (Bowers, first edition 2015); and my own American Gold and Silver: U.S. Mint Collector and Investor Coins and Medals, Bicentennial to Date, published in 2016.

As Whitman’s numismatic director, Dave Bowers has advised on all of these books, while keeping up his own prodigious and constant research and writing.

David W. Akers, who in the 1970s and 1980s broke new ground publishing his numismatic research, has said, “If one had a library consisting only of books and auction catalogs that Dave Bowers has written, the field of U.S. numismatics would be quite thoroughly and satisfactorily covered. Such a claim could not be made about any other person, past or present.”

The Guide Book of Gold Quarter Eagle Coins—the 26th volume in the Bowers Series, and the 20th of those volumes written by Bowers himself—expands and confirms that distinction. 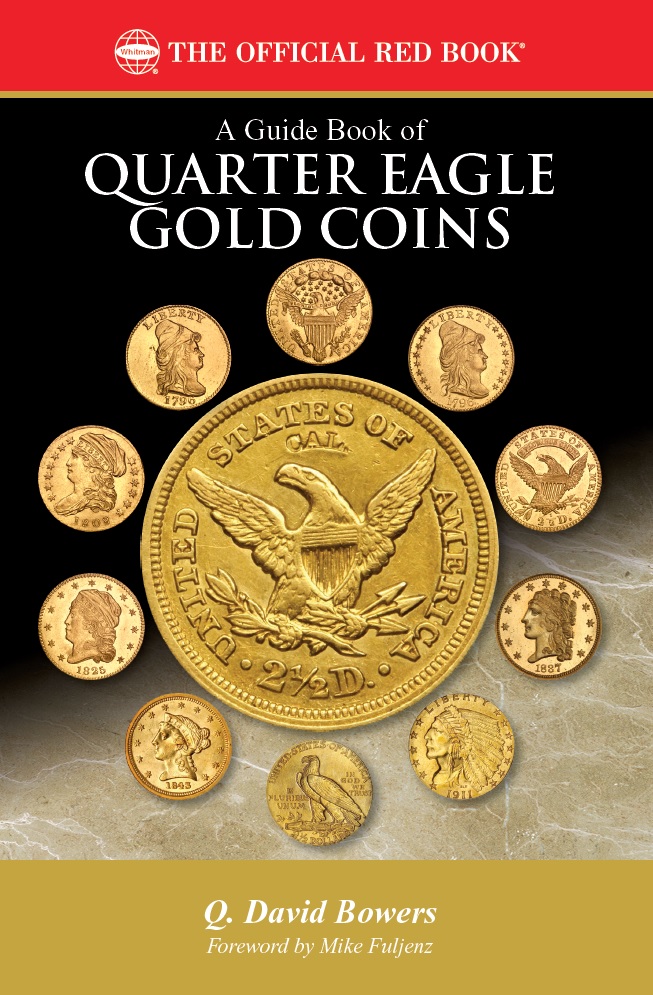