I was in Bloomington-Normal, IL late last week, accompanying my son on an official college visit to Illinois Wesleyan University, and I had the nearly the entire day to myself. So, I got online and found a few places to look for coins that seemed interesting.

I started with D & G Coins. The staff was very friendly, as were their large dogs, and after a minute or two of browsing, I asked to sift through the bins of loose 90% silver dimes. I was quoted a price of 23 times face value, which was just a bit over melt at the moment. I was given a padded mat to use, and began my task of searching for Mercury dimes. I had my iPad mini open with my digital copy of Krause’s Standard Catalog of World Coins 1901-2000, and my iPhone next to it, the spreadsheet listing my collection of 20th Century coins tuned to only display dimes. The owner had offered the use of a magnifier, not as good as my loupe, but adequate for the situation. After a few minutes, I had found 9 dimes that I did not already own; I then asked to see the quarter bin. There were a small percentage of Standing Liberty designs in the mix, but the years were all worn down beyond visibility, so I recalibrated my technology to Washington quarters. I was able to find 8 items, which seems to be enough. I proceeded to pay for the coins, then over to the nearby Starbucks for a late morning drink.

Later, I stopped by Monster Pawn. They, as you can imagine, had lots of interesting things, including a couple of display cases with coins and bullion. They had a silver-looking dish in one of the cases with a mixture of silver coins, which I asked to examine. I was quoted 25 times face here, not a real surprise; nothing caught my eye, though, although the presence of 40% silver Kennedy halves in the bowl was strange, given the rest was 90% dimes and quarters. I asked for it to be returned to the case, then began to scope out individual coins in 2×2 holders. I already had specimens of most of what I saw, but I did find one that I did not have: a 1868 Shield Nickel. The price on the coin was $15, which I paid without so much as a word of haggling. Once I got home and put it under my loupe, I could see what looked like a very uniform pattern on the surfaces, as if it were cleaned. I should have offered a lower value, but I am not unhappy to have the coin in my collection. 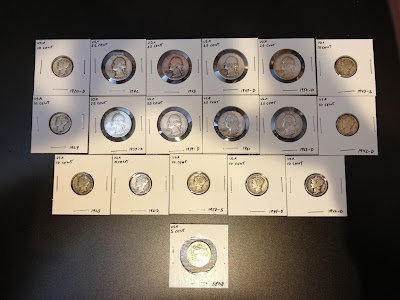 The school is on my son’s top list for colleges to attend, so there is a chance I will have further opportunities to visit these stores in the future.