The Royal Canadian Mint has unveiled three new coins which, for Canadians, capture one of their most memorable and iconic images as Canada joined the United Kingdom when it entered the fighting which was to become known as World War II. The image, widely known and referred to as “Wait for Me, Daddy” was taken on the 1st October 1940, in New Westminster, British Columbia by photographer Claude Dettloff and quickly became a powerful symbol of the war effort. 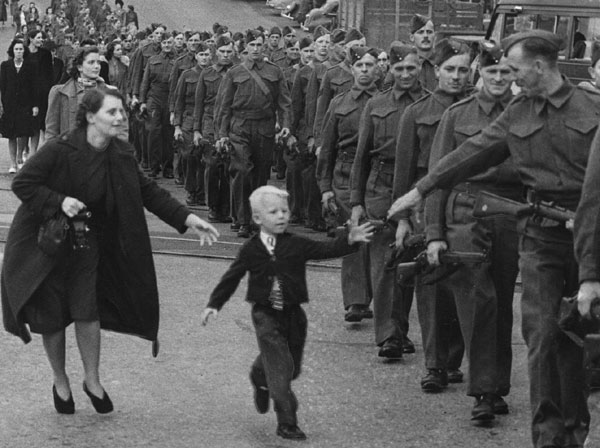 As the men of the British Columbia Regiment, the Duke of Connaught’s Own Rifles, formed an impressive line while they marched down the street, a pale-haired young boy by the name of Warren “Whitey” Bernard, had broken free of his mother’s grasp in an effort to reach out to and follow his uniformed father, who is marching off to war. No one other image captured so poignantly the impact of the war effort on the lives of Canadians than this heartwarming and emotive image of one little boy who wanted to be with his father. It was later reported that Jack Bernard survived the war and returned home to his family. 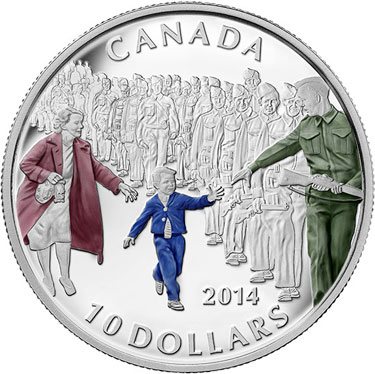 The coins all share the same reverse design which shows an engraved rendition of that famous and touching photograph, the detail of the photograph faithfully replicated. The larger silver example includes red color on the overcoat of Warren’s Mother while he himself is depicted wearing a blue outfit and his father is also seen in the vivid green uniform of his regiment. The obverse side includes the current effigy of HM Queen Elizabeth II as used on all circulation and many commemorative coins in Canada since 2003 and designed by Susanna Blunt. 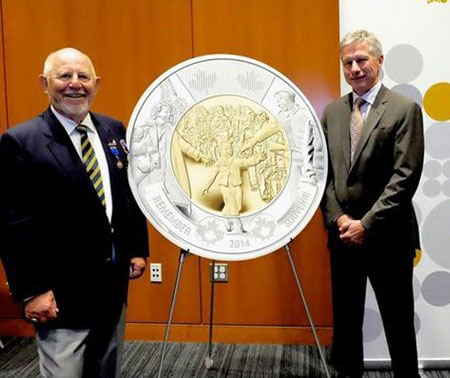 Warren Bernard and Marc Brûlé, Interim President and CEO of the Royal Canadian Mint at the unveiling of the new $2 commemorative coin marking the 75th anniversary of the iconic WWII era photograph.

In commemoration of the 75th anniversary of the declaration of the Second World War, the Royal Canadian Mint unveiled a new circulation two-dollar coin bearing this iconic image, during the City of New Westminster’s ceremonial unveiling of the Wait for Me, Daddy War memorial sculpture by Whitey Bernard, now 79 years old. The Royal Canadian Mint has embarked on an extensive coin program that will last until 2020 and will commemorate the many aspects of Canada’s experience, at home and on the battlefield, during the First and Second World Wars.

Events for coin exchanges are scheduled by the Royal Canadian mint include the dates of the 18th and the 24th October in Edmonton and Toronto – http://www.mint.ca/store/product/wfmdcoins.jsp?campaignName=WFMD&pId=2300018&lang=en_CA&rcmeid=van_waitformedaddy