Editor’s Note: This is a two-part column on coins holdered by non-top tier grading companies. Part I provides background information on holdered coins sold in online auctions and Part II, tips to adjust for exaggerated claims of a coin’s mint state and worth.

EBay has enforced other rules concerning how to list raw or certified coins by other grading companies, including bans on ascribing a dollar value in the title or description. Moreover, photos of the coin must be clear showing obverse and reverse.

I am not proposing the same rules for Proxibid. That’s a business decision it has to make. For the record, I have found Proxibid’s customer service to be excellent with staffers ready to help resolve problems. Nonetheless I do think stricter listing policies are in the interest of auction portals, as current disclaimers favor auctioneers (many of them new to the coin trade). 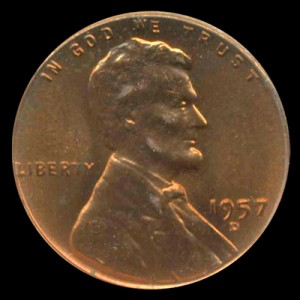 I won’t name the auctioneer or the grading company of this coin, pulled at random from one of Proxibid’s auctions. (Click the image for larger version)

The auctioneer lists this 1957-D cent as MS67 “red” (the brightest luster) worth between $2,500 and $10,000. I would grade the coin’s obverse AU55 brown with green spotting, rubs and hairline scratches. If I found it in pocket change, I would spend it.

Let’s say you disagree, increasing mint state to MS63 red-brown. The coin’s worth would average between 25-75 cents. An optimist might grade it MS65 red, worth $10.

Point is, the auctioneer has based his description on a hyped holder, overstating the value by as much as 10,000 percent.

If you have had similar experiences, share them in the comments section, including how you dealt with the situation.

In Part II of this topic, I will share tips to even the online playing field when dealing with coins in hyped holders.