The Royal Canadian Mint has released the second selectively anodized silver and niobium coin honoring the seasonal moon phases of the Algonquin people. The design features The Full Hunter’s Moon.

The Algonquins used the moon to track time, assigning a name to each full moon. The coin series features the buck, hunter, wolf, and pink moon to represent the summer, autumn, winter, and spring. The Buck Moon silver and niobium coin was released earlier this year. The series will run from 2011 through 2012. 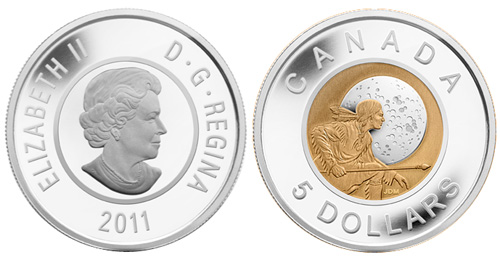 The Full Moon Silver and Niobium coin features an Algonquin hunter crouching by the light of a full moon, waiting for his quarry to appear. Rust colored hues are selectively applied to the inner niobium core of the coin to represent the autumn season. The outer ring is composed of 92.5% silver and 7.5% copper with an inner niobium core. The reverse is designed by artist John Mantha.

On the obverse, is an image of Queen Elizabeth II designed by Susanna Blunt. The composition of the obverse is 92.5% silver and 7.5% copper.

Each coin has a diameter of 28 mm and weight of 8.5 grams. A mintage limit of 7,500 coins worldwide has been imposed. Coins are available on the RCM’s website at mint.ca.