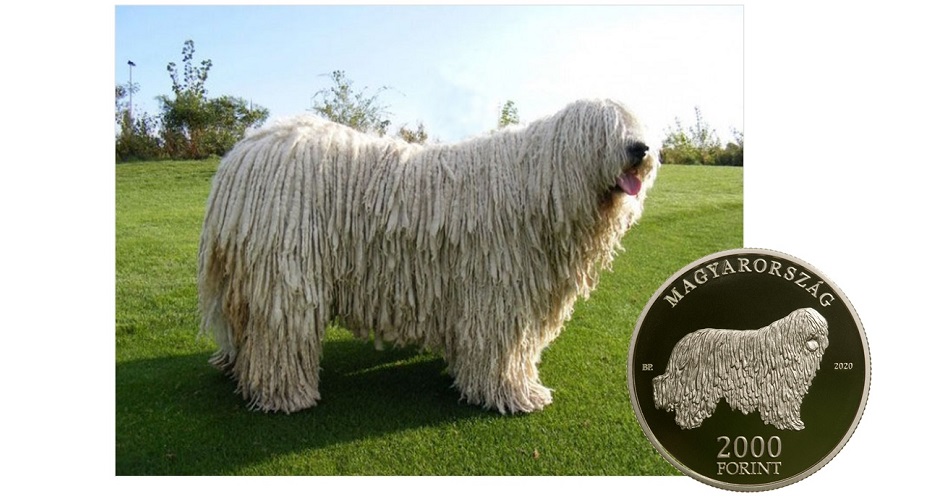 The National Bank of Hungary has issued (4th October) new collector coins which highlight one of the country’s native dog breeds and is the second coin in the series launched last year entitled “Hungarian Sheep and Hunting Dog Breeds.” The release of these coins coincides with World Animal Day. Featured on the new coins is the Hungarian Komondor, also known as the Hungarian sheepdog, they are a large, white-coloured breed of livestock guardian dog with a distinctive long, corded coat.

Originally bred to guard livestock, a job they still excel at thanks to their commanding appearance and incorruptible, courageous behaviour, Komondors have earned the respect of animal shepherds and herders. The name Komondor derives from Koman-dor, meaning “Cuman dog,” though the breed itself descends from Tibetan dogs originating from Asia. The American Kennel Club recognised the breed in 1937, but there were few Komondors outside Hungary until after the early 1960s.

Sometimes described as the “dreadlock dog,” or “nature’s most adorable mop,” these references are to the dog’s very unusual coat of long dreadlock type of tufts which naturally forms into long matted strands. As such, a Komondor’s coat shouldn’t be brushed, but their coat does need extensive human intervention to care and keep their white colour free of dirt, debris, and parasites. A regularly scheduled visit to a groomer should also be considered. In terms of temperament, Komondors are known to be affectionate with their families; these dogs are intelligent and eager to please. Because they’re so protective, they excel as decent watchdogs and will bark if anything is amiss. They prefer to have a lot of room to run and burn off energy, though having said that, they seem content to spend hours following their owner around the house as they are not high-maintenance dogs. 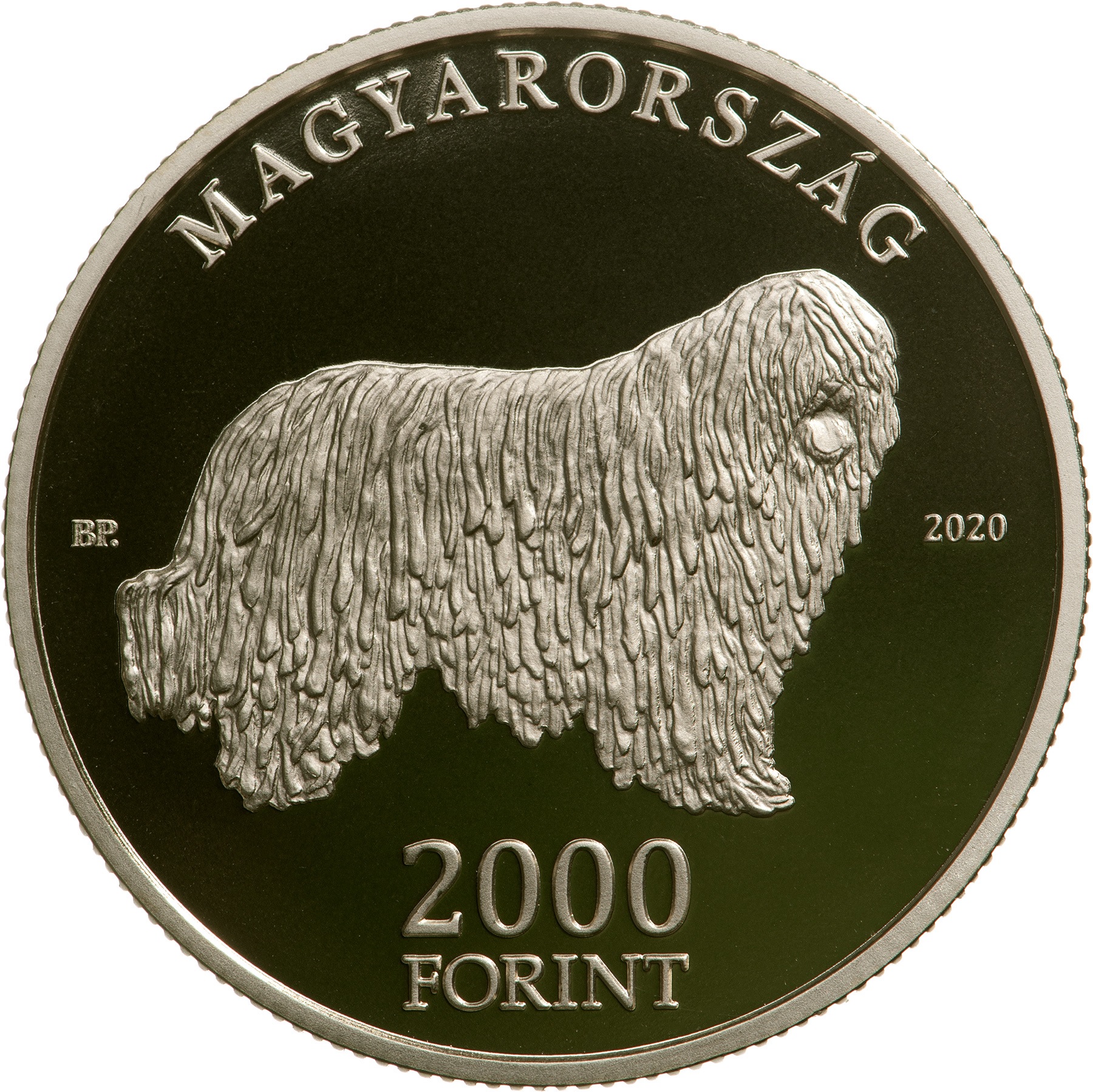 The coins are produced by the Mint of Hungary at their facilities in Budapest on behalf of the National Bank and are designed by metal craftsman Imrei Boglárka. The obverse side captures the characteristics and character of the komondor with its thick, corded coat, which is an excellent thermal insulator and also protects the animal from injury during its work. With its characteristic stance, this provides an emblematic sight of commanding authority. The inscription MAGYARORSZÁG (“Hungary”) is placed above the primary design along the upper edge. The denomination of 2000 FORINT is placed below the komondor with the year of issue 2020 placed to the right and the Mint of Hungary’s mintmark shown to the left. 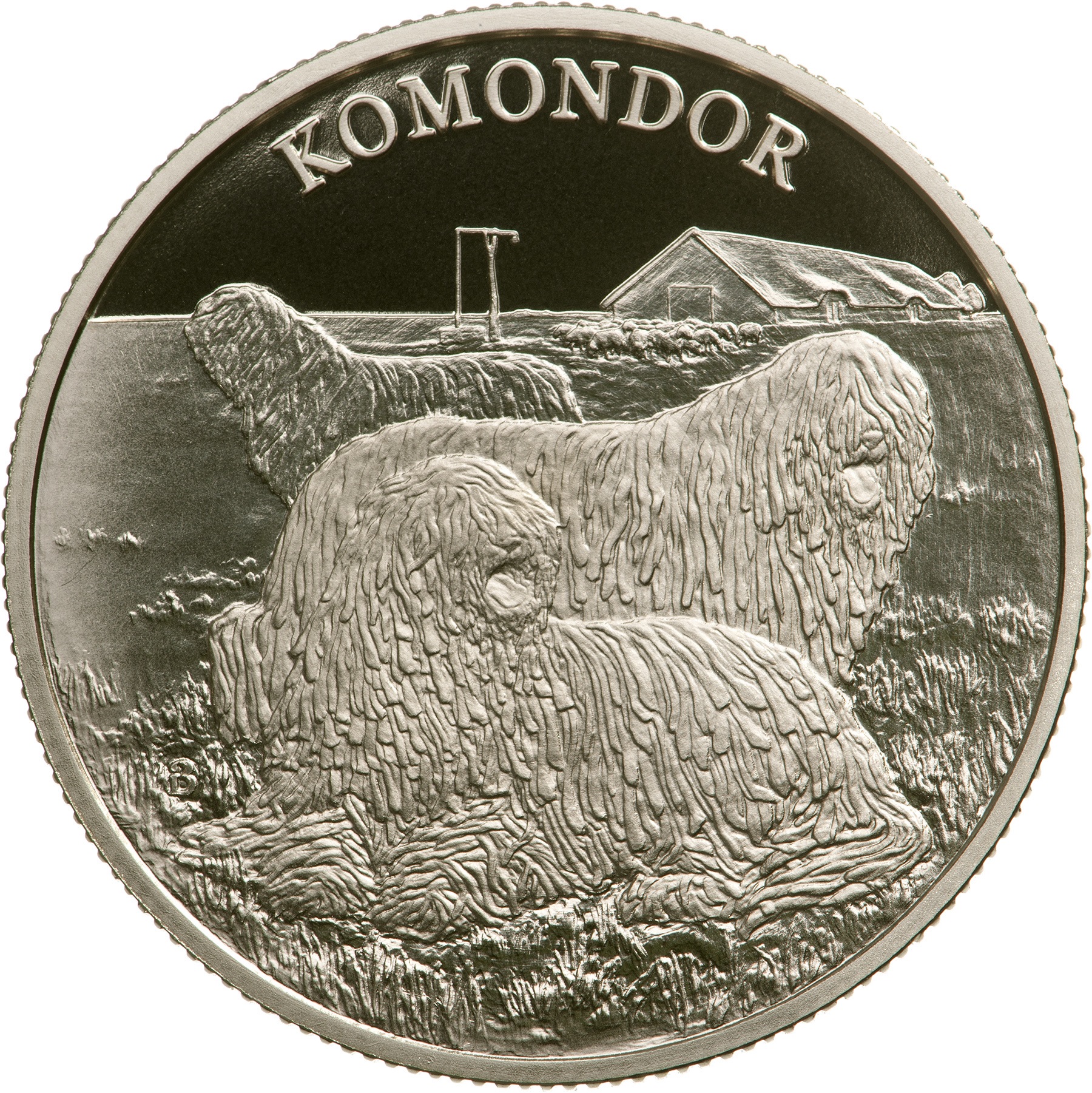 The reverse side includes a family of three Komondors seen at work, in typical guarding and observation posture, suggesting that the Komondor basically guards and protects the area and the flock as a team. Behind the dogs is a grassy meadow and farm gate with a heron and a grazing flock of sheep. The text KOMONDOR is placed above the primary design along the edge. Imrei Boglárka designs the commemorative coins, and his initials are discreetly placed in the grass at the bottom left.

Each coin is encapsulated and accompanied by a certificate of authenticity. A presentation case is available separately. For additional information about these coins and others issued by the Hungarian National Bank, please visit the website of the Mint of Hungary.

Collectors in the U.S. and Canada can inquire at the Coin and Currency Institute, the Mint of Hungary’s official North American distributor, here.

Taiwan: Commemorative gold and silver Proof coins to be released in celebration of presidential inauguration