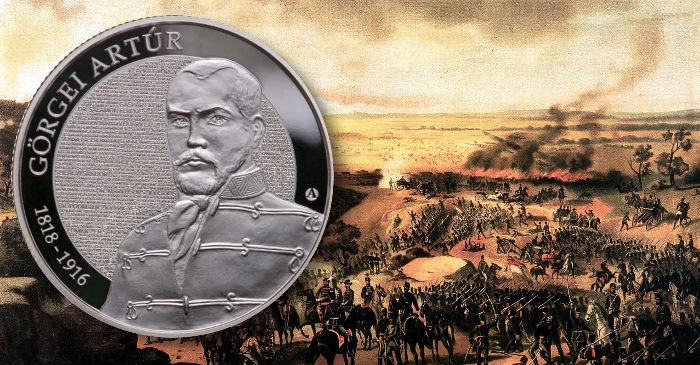 The National Bank of Hungary have issued (30th January) a new coin which is in remembrance of the 200th anniversary of the birth of Artúr Görgei (1818-1896), who is considered one of the country’s most esteemed military minds, and army officer who is credited with the staunch defence of Hungary’s declaration of independence in 1848. The coin also marks the 170th anniversary of Hungary’s 1848-49 revolution and war of independence. The movement would be defeated in October 1849, but would eventually result in the Austro-Hungarian Compromise of 1867 which recognised autonomy within the empire and the establishment of the Kingdom of Hungary until 1918.

The coin is struck at the Mint of Hungary on behalf of the National Bank and is designed by András Szilos. 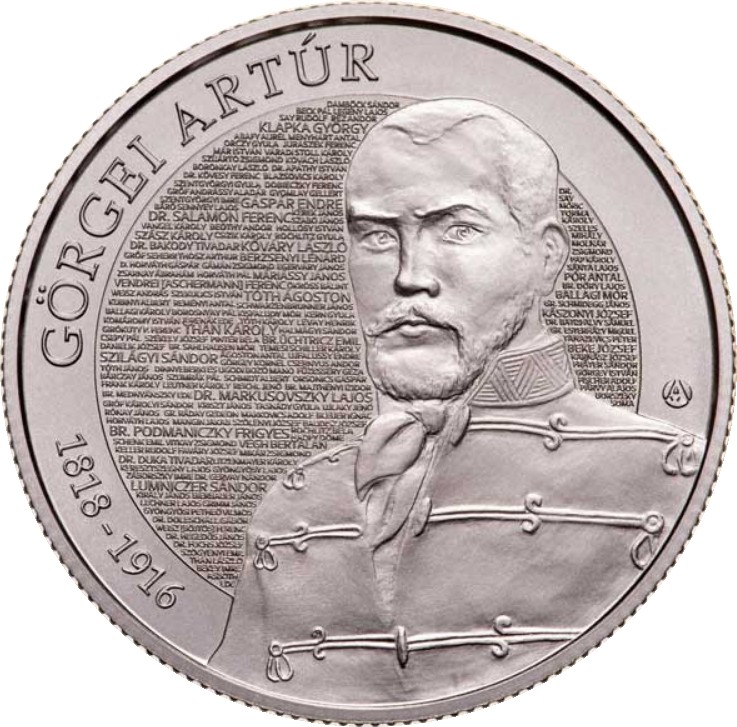 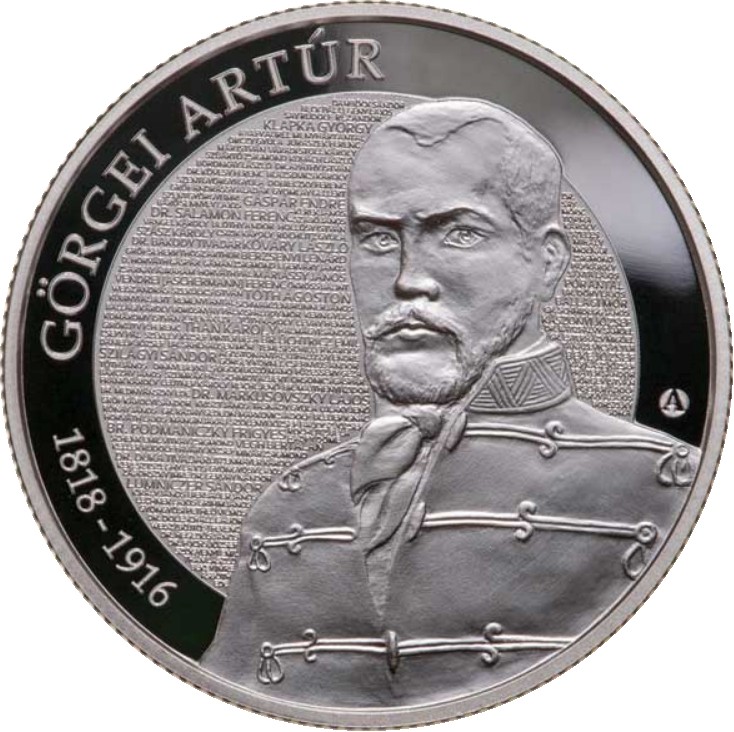 The obverse side includes a facsimile of a daguerreotype portrait believed to have been commissioned at the time of the beginning of the revolution, which shows Görgei at 30 years of age. The text around the portrait reads GÖRGEI ARTÚR along with the commemorative years 1818–1916. In the background behind the portrait is micro-text which includes a portion of the declaration circulated and published in the daily newspaper Nation on the 23rd November 1884, which was signed by 207 former comrades seeking to vindicate Görgei of the charges of treason. The signed statement included the words:

. . . quite honestly it is fair to say that the surrender at Világos was not an act of treason, being faced with an enemy so superior in numbers, our weapons were not dishonoured, it was not a sin against our country, it was a humane and respectful end of the further useless bloodshed of fellow Hungarians and furthermore, the conclusion of a hopeless, pointless war, which therefore lost its cause. 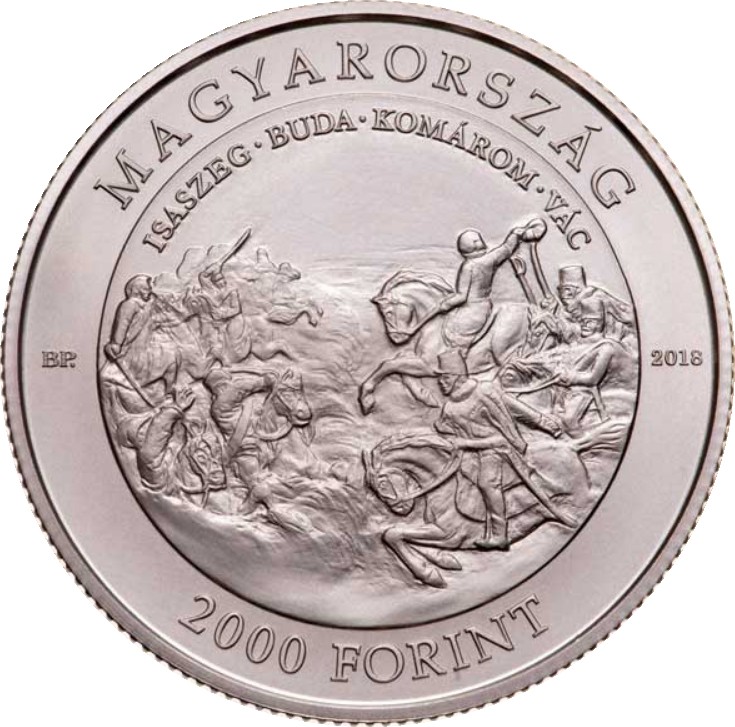 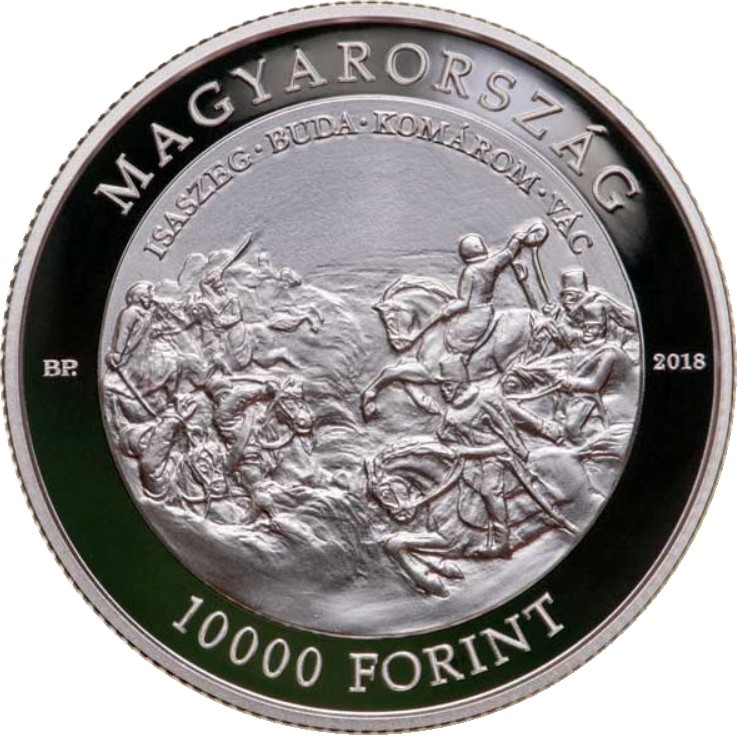 The reverse side depicts a scene from the Second Battle of Komárom, also known as the Battle of Ács, which took place on the 2nd July 1849. Görgei is portrayed in the centre, leading the Hungarian hussars to attack before he was wounded. The depiction is inspired by the artwork entitled “Görgei Orders a Cavalry Charge in the Second Battle of Komárom at Herkálypuszta,” which is the work of Mór Than (1828–1899), a noteworthy Hungarian painter. The text MAGYARORSZAG is placed above the primary design along the edge and the denomination of 10000 FORINT (or 2000 FORINT) is placed below the central design with the year of issue, 2018, placed just to the right of the design.

Both the cupro-nickel (Brilliant Uncirculated) and silver (Proof) versions are encapsulated and accompanied by a certificate of authenticity. Each coin is available with or without presentation case. For additional information on these and other coins issued by the National Bank of Hungary, please visit the website of the Mint of Hungary

Born on the 30th January 1818, in Toporcz, Görgei served as a youth in the Austrian army but left it to study chemistry and had remarkable achievements in this area before 1848. When supporters of independence of Hungary from Austria raised a national army at the beginning of 1848, Görgei joined up and soon won a reputation for valour and leadership. A significant demonstration for Hungarian independence on the 15th March 1848, in the city of Pest, was influenced by the same actions from Parisians who had demonstrated for the overthrow of King Louis Philippe in February. The leader of Hungary’s national opposition, Lajos Kossuth (1802–1894), took the opportunity on the 3rd March 1848, to petition for “the removal of the dead hand of Viennese absolutism as the only way to safeguard the liberties of Hungary and of all the peoples of the monarchy.” With these historic comments, he demanded a parliamentary government for Hungary and a constitutional government for the rest of Austria. On the 17th March 1848, King Ferdinand V (also Emperor Ferdinand I of Austria) assented to this demand from Hungary’s Diet and the country’s first separate government was created under the Premiership of Lajos Batthyány (1807-1849).

Kossuth was appointed as the minister of finance in the new government and immediately began developing the internal resources of the country including the re-establishment of a separate Hungarian coinage and bank notes. It was Kossuth whose leadership was looked to in terms of recognising the new government. In a speech on the 11th July, he asked that the nation should have the ability to arm themselves in self-defence, and demanded a 200,000 strong army. This army would become necessary in a very short time as, within the empire, there were those opposed to any degree true Hungarian independence. Despite the fact that Croatian Count Josip Jelačić (1801–1859), a noted army general within the Austro-Hungarian Empire, supported independence for Croatia from the Austrian throne, he actively opposed the Hungarian Revolution of 1848-1849 and did so by supporting Austrian interests in putting down revolutionary movements. Fearing the possibility that the new Hungarian state would incorporate Croatia into their collective, Jelačić ingratiated himself with the Austrian throne and sought to support his own goals to maintain autonomy from the Kingdom of Hungary. At the beginning of September, just six months after giving his ascent, King Ferdinand V dismissed the Batthyány government and authorised the Count of Croatia, Josip Jelačić, to occupy Hungary. The latter invaded the country on the 11th September 1848, when he crossed the River Drava into Hungarian territory with 45,000 soldiers.

On the 29th September 1848, Hungarian troops led by Lieutenant General János Móga (1784–1861) defeated the troops of Jelačić, saving the Hungarian capitals of Buda and Pest. Görgei’s 2,500 troops, reinforced with 16,500 peasant militia, watched the movements of the Croatian reinforcement troops whose retreat he blocked and eventually forced to surrender. After hearing of the news of the defeat of the defeat of Jelačić at the hands of the Hungarian army, the people of Vienna revolted on the 6th October, which forced the emperor to flee for safety to Olmütz — a city in Moravia — known today as Olomouc in the Czech Republic.

On the 30th October 1848, Görgei was placed in full command of the Hungarian forces on the upper Danube River. Austrian armies would also invade Hungary in December, but Görgei, realising the inexperience of his troops, withdrew from the frontlines and refused to defend Budapest. The tension that this decision created between himself and the Regent-President Lajos Kossuth was increased when on the 5th January 1849, Görgei was forced to issue an order to his troops that was interpreted as defiance of the authority of the Committee of National Defence. However, his reputation was later restored during his brilliant spring offensive which nearly drove out all the Austrian army from Hungary. The Hungarian declaration of independence was presented to the Diet in a closed session on the 13th April 1849, by Lajos Kossuth, which declared the full independence of Hungary from the Habsburg monarchy as a consequence of the Hungarian Revolution of 1848. The declaration was passed unanimously the following day, and after the declaration, Görgei agreed to merge his command with the post of minister of defence, although his personal disapproval of the dethronement of the Habsburgs and that of the emperor was no secret.

On the 2nd December 1848, Emperor Ferdinand I abdicated the throne at Olomouc, as part of the plan by minister-president Felix zu Schwarzenberg (1800–1852), a Bohemian nobleman and Austrian statesman, to restore the Habsburg Empire as a great European power following the series of revolutions in the Austro-Hungarian Empire in 1848. The abdication allowed Ferdinand’s nephew, the Archduke Franz Joseph, to succeed to the throne. After a series of serious defeats on the side of the Austrians in 1849, and with the Austrian state coming close to the brink of collapse, the young Emperor Franz Joseph called upon Russia for help in the name of the Holy Alliance. Czar Nicholas I responded by deploying a 200,000 man strong army with 80,000 auxiliary forces. With the joint army of Russian and Austrian forces, they defeated the Hungarian forces.

Before the onslaught of combined Austrian and Russian forces, Görgei refused suggestions to move his armies to the western frontier, proclaim himself military dictator, or to make peace with the Austrians before the expected Russian invasion occurred. Instead, he fought on with great skill and courage against increasing odds but, on the 11th August, and with Hungary’s situation hopeless, Kossuth abdicated as governor in favour of Görgei, who in turn surrendered to the Russians at Világos two days later. It was the personal intervention of the Russian Emperor Nicholas I who spared Görgei from execution after he surrendered, though he had asked the Russians for mercy towards his officers and his soldiers. Görgei argued that if they wanted someone to hang, then he would accept this fate for himself, but in exchange, he wanted his generals to be spared, which the Czar accepted. However, initially, the Austrians refused to fulfill their allies’ wishes. As part of the terms of surrender, Görgei was interned in the city of Klagenfurt, Austria, where he would remain until the implementation of the Austro-Hungarian Compromise of 1867 when he was pardoned and allowed to return home. After his return, he played no further part in public life but had to suffer many attacks from his countrymen who believed that he was a traitor. He faced all these accusations with stoicism and resignation. Görgei respected the memory of the former governor–president of Hungary, declaring that Kossuth was a great man, without whom the country would never have experienced the national awakening it had in 1848 which eventually resulted in a recognised state.

Before his death, Görgei was once asked by a journalist about the cause of his military successes to which he modestly replied:

I didn’t have any military genius in me. That is nothing more than a fairy-tale or a Hungarian legend, like so many other things. I just kept orderliness among my soldiers, that’s all, and the fellows on some occasions behaved bravely. Everything else is fiddlesticks.

Although Görgei viewed many actions of Hungarian revolutionaries as foolish and wrong, he sacrificed his own feelings to what he regarded as the higher interest, the defence of his homeland, his fellow countrymen, and of the newly founded nation. The reputation of Görgei, for some, remained tainted due to accusations of treason brought against him by Kossuth and his followers. These charges were eventually proved false by documents published in 1918, though he did not live long enough to see his name fully restored. Görgei died on the 21st May 1916, at the age of 98, in Budapest — ironically on the 67th anniversary of one of his greatest victories, the taking of Buda Castle from Austrian troops.