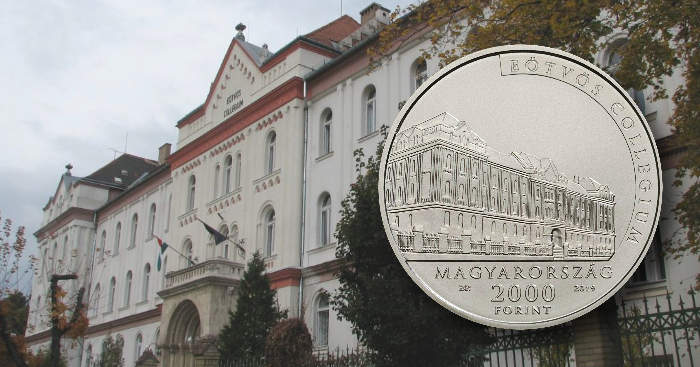 The National Bank of Hungary has issued (8th April) new collector coins which are in remembrance of the 100th anniversary of the death of Hungarian physicist and inventor Baron Loránd Eötvös. He is remembered today primarily for his research on gravitation and surface tension, and the invention of the torsion pendulum.

Born in the Svábhegy part of Buda on the 27th July 1848, his father was Baron József Eötvös, a cabinet minister for religion and education in Hungary’s first independent government. He started his training at the Piarist Grammar School in Pest where he graduated in 1865, after which he continued studying both law and natural sciences at the University of Budapest under the instruction of noted academics such as Károly Than (chemistry), Ottó Petzval (mathematics) and József Krenner (geology). In 1868, Eötvös decided to pursue physics and went to the University of Heidelberg, which, at the time, was the leading institution for natural sciences and where he was awarded his doctorate summa cum laude in 1870. After returning to Hungary, he applied as a private instructor at the University of Budapest and was accepted as a corresponding member of the Hungarian Academy of Sciences at the age of 25. His great talent is illustrated by the fact that he later held leading positions in both of these institutions, being appointed the head of the experimental physics department at the age of 30 and holding the position of president of the Academy of Sciences for 16 years, from 1889 to 1905.

From 1886 to the end of his life, Loránd Eötvös researched and taught at the University of Budapest, which in 1950 was renamed after him as the Eötvös Loránd University. Eötvös died on the 8th April 1919 and is buried in the Kerepesi Cemetery in Budapest, Hungary. Both collector coins are produced by the Mint of Hungary at their facilities in Budapest and are designed by Borbála Szanyi. The central motif on the obverse depicts the Eötvös József Collegium building, an essential intellectual nexus in the education of Hungarian teachers and scientists. The Collegium was created in 1895, at the initiative of Loránd Eötvös. This unique institution in Hungarian history bears the name of the founder’s father, József Eötvös, who launched important reforms in the Hungarian educational system. In 1875, Eötvös already submitted a proposal to Ágoston Trefort, cabinet minister for religion and education, for the creation of a high-quality boarding school for teacher training, inspired by the world-famous École Normale Supérieure in Paris. However, the plan only came to fruition two decades later, after Loránd Eötvös’ brief term as cabinet minister (1894-1895). The design includes the facade of the building from a slight angle, southwest. This protected historical monument includes the circular legend EÖTVÖS COLLEGIUM in negative relief on the coin. The raised plane also continues underneath the depiction of the collegium. 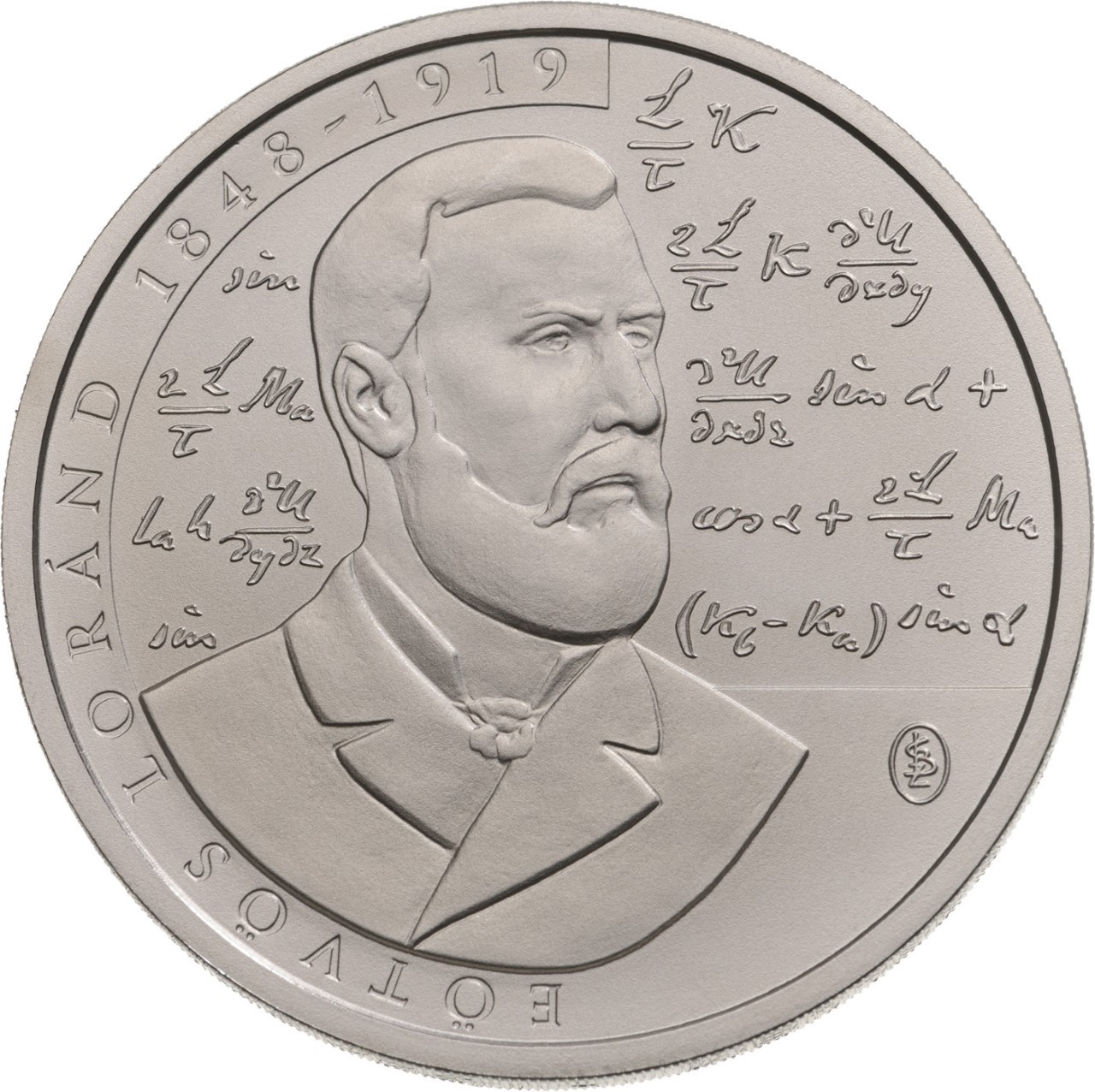 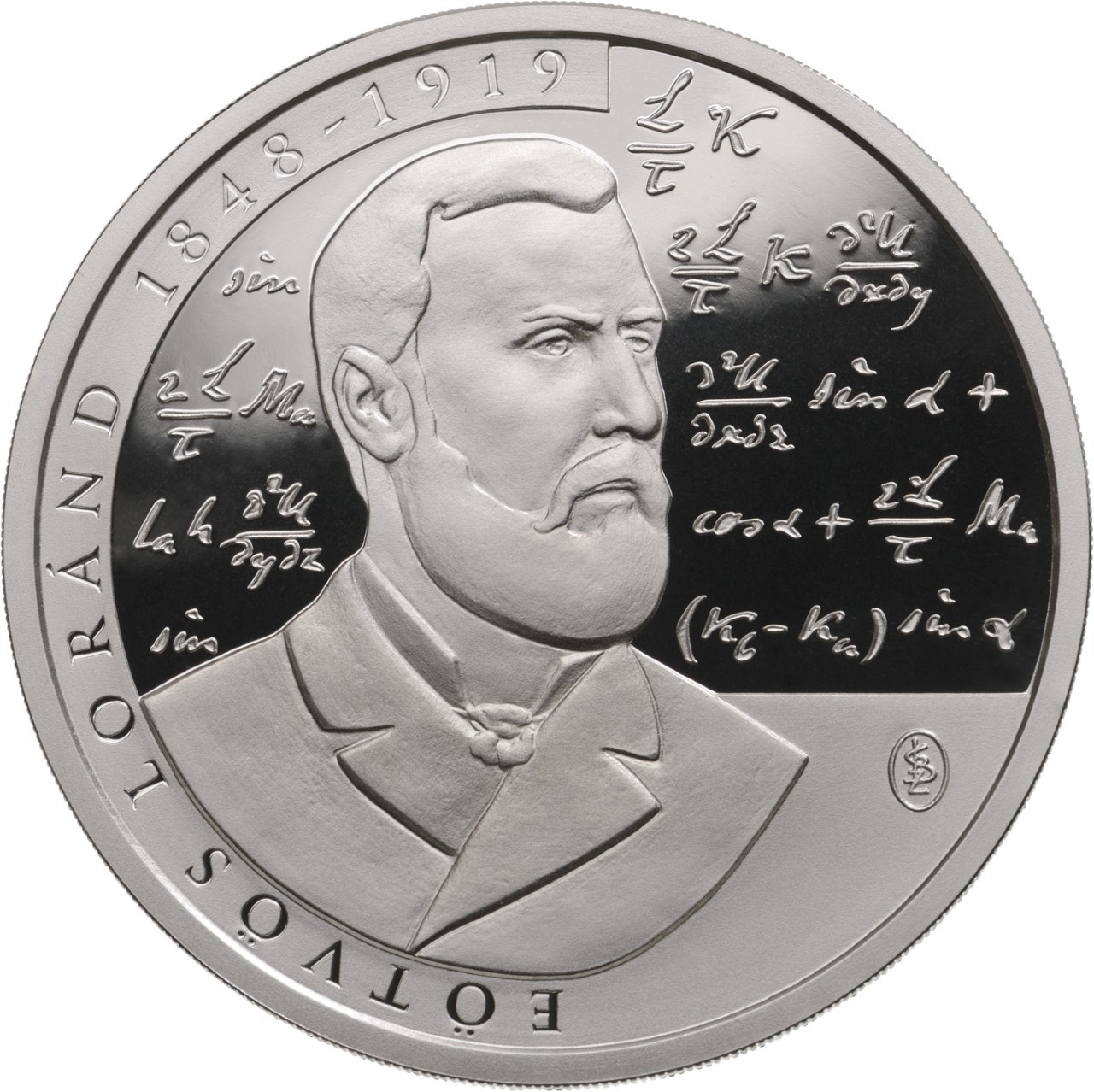 The reverse side of the coin features a three-quarter profile portrait of Loránd Eötvös, based on a photograph dated from 1891-1892. The back of the coin follows the same design concept, with the raised plane on the left, the legend EÖTVÖS LORÁND 1848-1919 (his date of birth and death) is shown in negative relief with the portrait also continuing on the same raised plane. The master mark of the coin’s designer, Borbála Szanyi, is found below the horizontal line dividing the raised plane, slightly to the right. Behind the portrait, the formula describing the four typical quantities of change in gravitational fields can be seen, along with Eötvös’ signature. These can be measured with the Eötvös torsion balance.

The reeded edge of the coin bears the inscription SZABADON SZOLGÁL A SZELLEM (“The Spirit Serves Freely”), which today remains the slogan of the Eötvös Collegium.

Each base metal and silver coin is encapsulated and is accompanied by a certificate of authenticity; a presentation case is available at an additional cost. For more information about these coins and others issued by the National Bank of Hungary, please visit the website of the Mint of Hungary.

For coin collectors visiting Budapest, you can also visit the Mint of Hungary’s retail shop at Pénzverő Zrt. Budapest, Báthory u. 7.