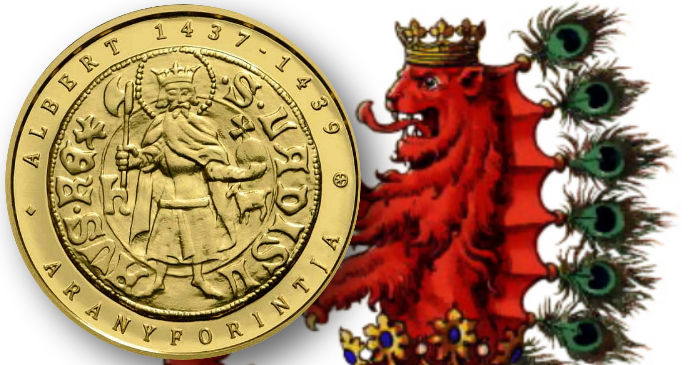 The Hungarian National Bank have issued (13th March) their latest recreation of the gold forint coins which are part of their popular and ongoing series entitled “Medieval Hungarian Gold Forints,” first launched in 2012. The series includes detailed designs from some of Hungary’s most well-known gold forint coins from the rulers of Medieval Hungary beginning with the exquisite replicated design of the gold forint of Charles I issued in 2012. The series has grown to include the coins of King Louis I in 2013, Mary, Queen of Hungary, which was issued 2014, and the gold forint of King Sigismund in 2016.

The latest coin focuses on the coins issued during the reign of Albert I (1397–1439), who was king of Hungary from 1437 to 1439. Upon the marriage to his wife Elizabeth of Luxembourg (1409–1442), who was herself the heir of the Hungarian King Sigismund, Albert was the Duke of Austria as Albert V, having succeeded his father, also named Albert. On the death of Sigismund, Elizabeth had been assumed to succeed to the Hungarian throne with her consort, but only Albert was recognised as king by Hungarian nobles with Elizabeth becoming Albert’s consort. With his succession as king, Albert had paved the way for Hungary’s first sovereign from the House of Hapsburg. On the 1st January 1438, and just as his predecessor had done, he moved his court to the Hungarian kingdom from where he later oversaw his other domains. As well as being crowned king of Hungary, he was also named as king of Croatia and Bohemia. On the 18th March 1438, he was chosen as “King of the Romans” at Frankfurt, an honour which he does not appear to have sought, though was never crowned as Holy Roman Emperor during his lifetime.

The promising rule of King Albert I came to an unexpected and early end when on the 27th October 1439, he was killed in the village of Neszmély while engaged in defending Hungary against the attacks of the Ottoman Turks. King Albert was buried in the city of Székesfehérvár and left his widow Queen Elizabeth, who was expecting the couple’s third child in a precarious position of trying to defend not only her own succession rights, but those of her children. As their third child was a son, Elizabeth’s fight on behalf of him had begun when Bohemian nobles recognised and crowned King Vladislaus III of Poland as the new king of Hungary in May 1440. With the untimely death of Elizabeth in 1442 and the death in battle of King Vladislaus in 1444, the throne of Hungary had been disputed and Ladislaus had been king in name only. He died unexpectedly in Prague on the 23rd November 1457, and is remembered as the last male member of the Albertinian Line of the House of Habsburg. Albert was described during his lifetime as an energetic and warlike prince, whose short reign as the king of three realms might have given great promise and real purpose to the title and position of Holy Roman Emperor. With its final dissolution in 1806, the House of Habsburg remained its ruling dynasty.

The young King Ladislaus was succeeded by Matthias I (1443–1490), who was the second son of John Hunyadi, a pre-eminent military commander and political leader of the Kingdom of Hungary who had claimed the Hungarian crown in the absence of an heir to Albert I. 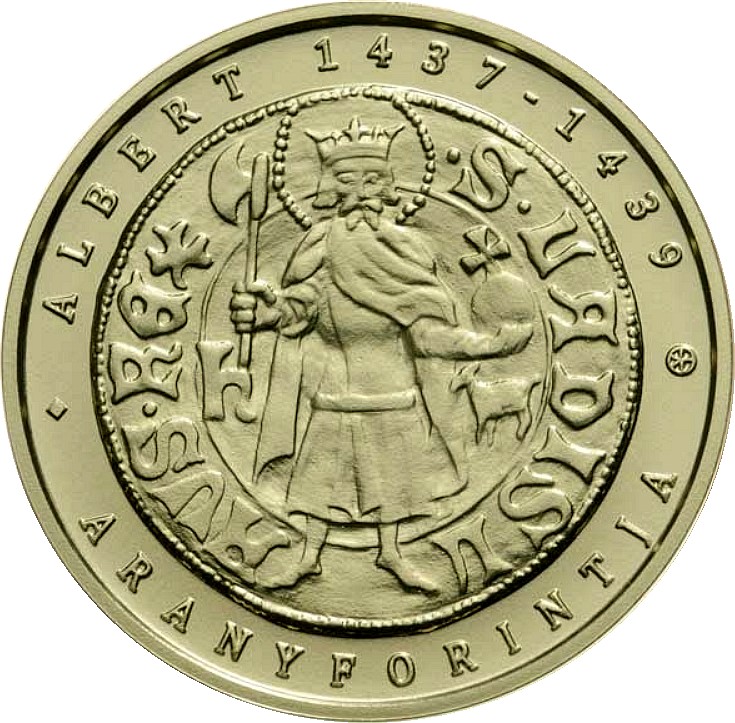 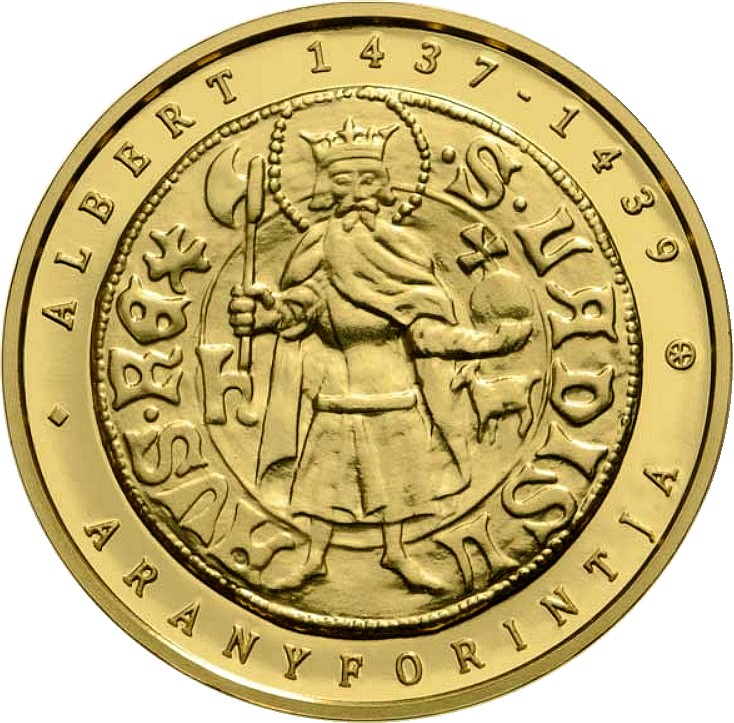 The coin is produced by the Mint of Hungary on behalf of the National Bank of Hungary at their facilities in Budapest. The obverse side includes a faithful replica of the design used on the gold forints during King Albert’s reign, which were issued circa 1438. The coin depicts an image of a standing Saint King Ladislaus facing forward with light armour and an orb in his left hand. The lettering around the figure of St. Ladislaus reads S LADISLAVS REX which translates as “King Saint László.” 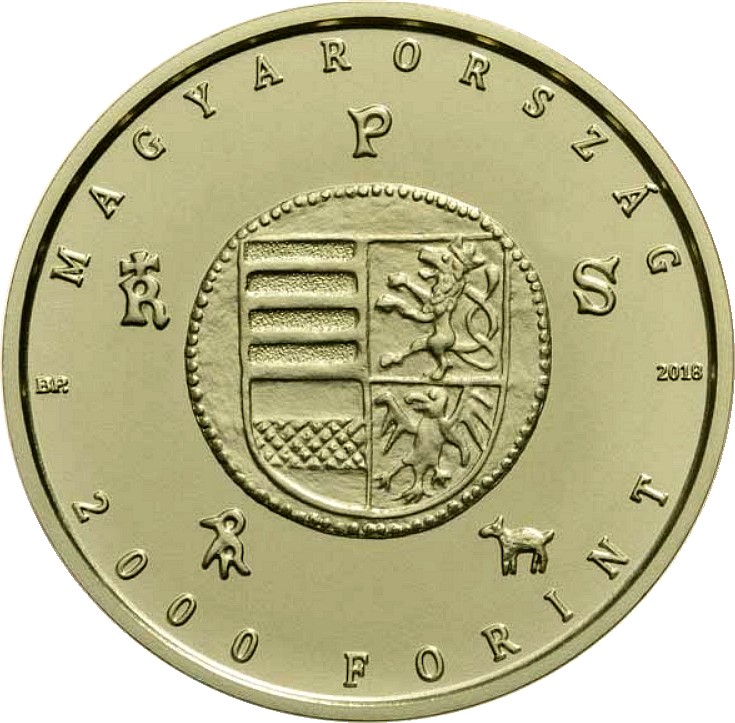 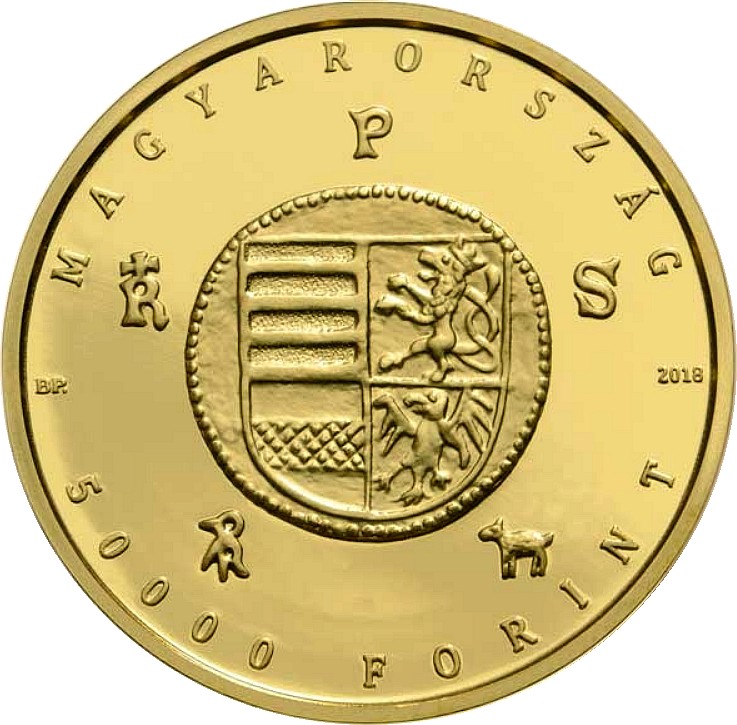 The reverse includes the crest of King Albert, a quartered coat of arms with representations of the crowns of Hungary, the Czech lands, Austria, and Moravia. The text MAGYARORSZAG and the coin’s denomination are placed above and below the primary design.

The coin is minted in two versions and two denominations. The gold examples carry a face value of 50,000 forints and the base metal versions are denominated as 2,000 forints. Each coin is encapsulated and presented with a certificate of authenticity. For additional information on these and other coins issued by the National Bank of Hungary, please visit the website of the Mint of Hungary.