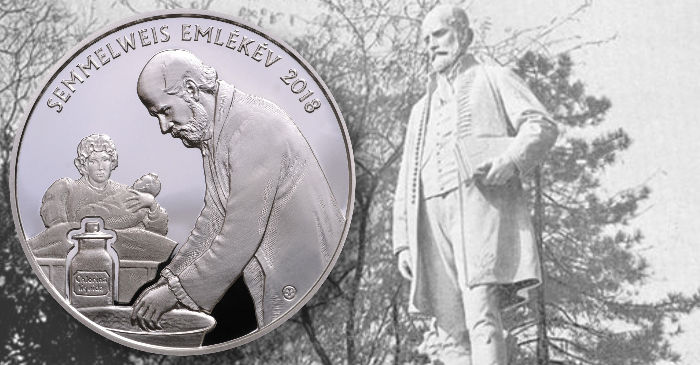 The National Bank of Hungary has issued (1st July) new collector coins which are in remembrance of the 200th anniversary of the birth of Ignác Semmelweis (1818–1865), a prominent physician remembered for his work in the field of obstetrics.

Ignác Fülöp Semmelweis was born on the 1st July 1818, as the fifth child of the wealthy merchant József Semmelweis and Terézia Müller. After completing secondary school at the Royal University Catholic Gymnasium of Buda, he started law school in Vienna in 1837 but switched to medical school that same year — against the wishes of his father — who wanted him to become a military judge.

Ignác Semmelweis is known as the “saviour of mothers,” and this term of affection is based on statistics and his own research and observations on the subject of childbed fever. He was the first person to discover that “childbed,” or puerperal fever, was the bacterial infection beta-hemolytic streptococcus occurring in the female reproductive tract following childbirth or miscarriage, and not a disease, as previously thought. The infection was also inadvertently spread by doctors due to a lack of sanitation. Semmelweis discovered that this infection could be drastically reduced or eliminated with appropriate hand washing by medical caregivers and made this discovery in 1847 while working in the maternity department of the Vienna Lying-in Hospital.

He demonstrated that the cause and effect chain of the infection causing childbed fever, which had an extremely high mortality rate, could be prevented by doctors and midwives carefully washing their hands with a chlorinated lime solution, which could reduce the mortality rate from 25-30% to 1%. Unfortunately, the crucial preventive measures he proposed were revolutionary and 30 years ahead of their time, and thus they were rejected by the medical science of the era. His discovery and theories were only recognised and applied in 1877, based on the work of Louis Pasteur and Robert Koch (bacteriology), and Joseph Lister (antiseptic surgery). Semmelweis was, however, the first to establish the practice of aseptic gynecology and child delivery, which was the forerunner to the principle of antiseptic surgery.

Ignác Semmelweis ranks among the world’s best known Hungarians. In 1906, a street was named after him in Budapest, and his name was adopted by the Budapest Medical University in 1969, and additionally in 1991 by the Vienna gynecological clinic where he once worked. His memory is also preserved in the name of a minor planet, 4170 Semmelweis. The 2018-dated coin is not the first time Semmelweis has appeared on commemorative Hungarian coinage, as his likeness appeared on gold and silver coins issued in 1968 for the 150th anniversary of his birth.

His place of birth was made into a museum in 1965 and still operates today as the Semmelweis Medical History Museum, Library, and Archive. In 2013, UNESCO added the discovery made by “the saviour of mothers” about childbed fever and the related primary documents to its register entitled “Memory of the World,” which was established in 1992. 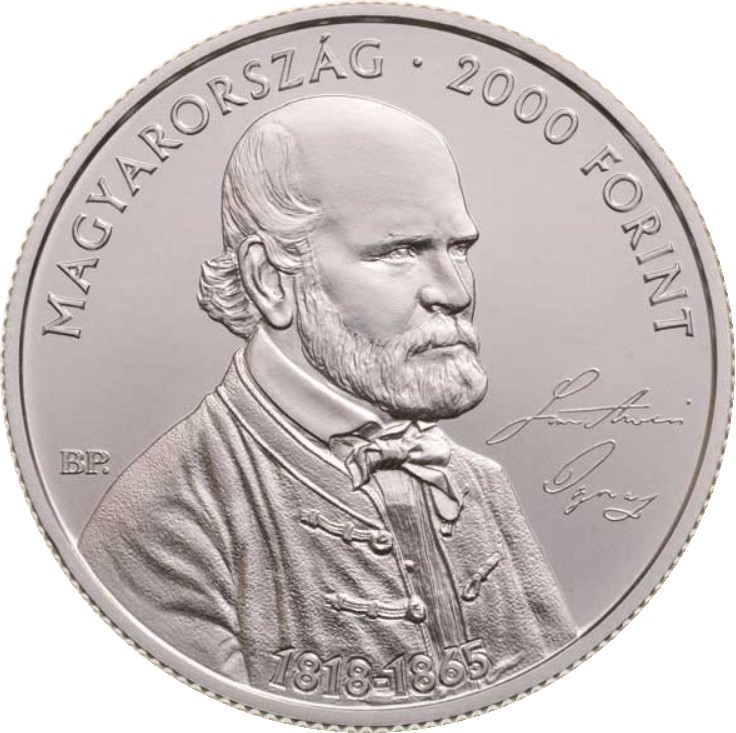 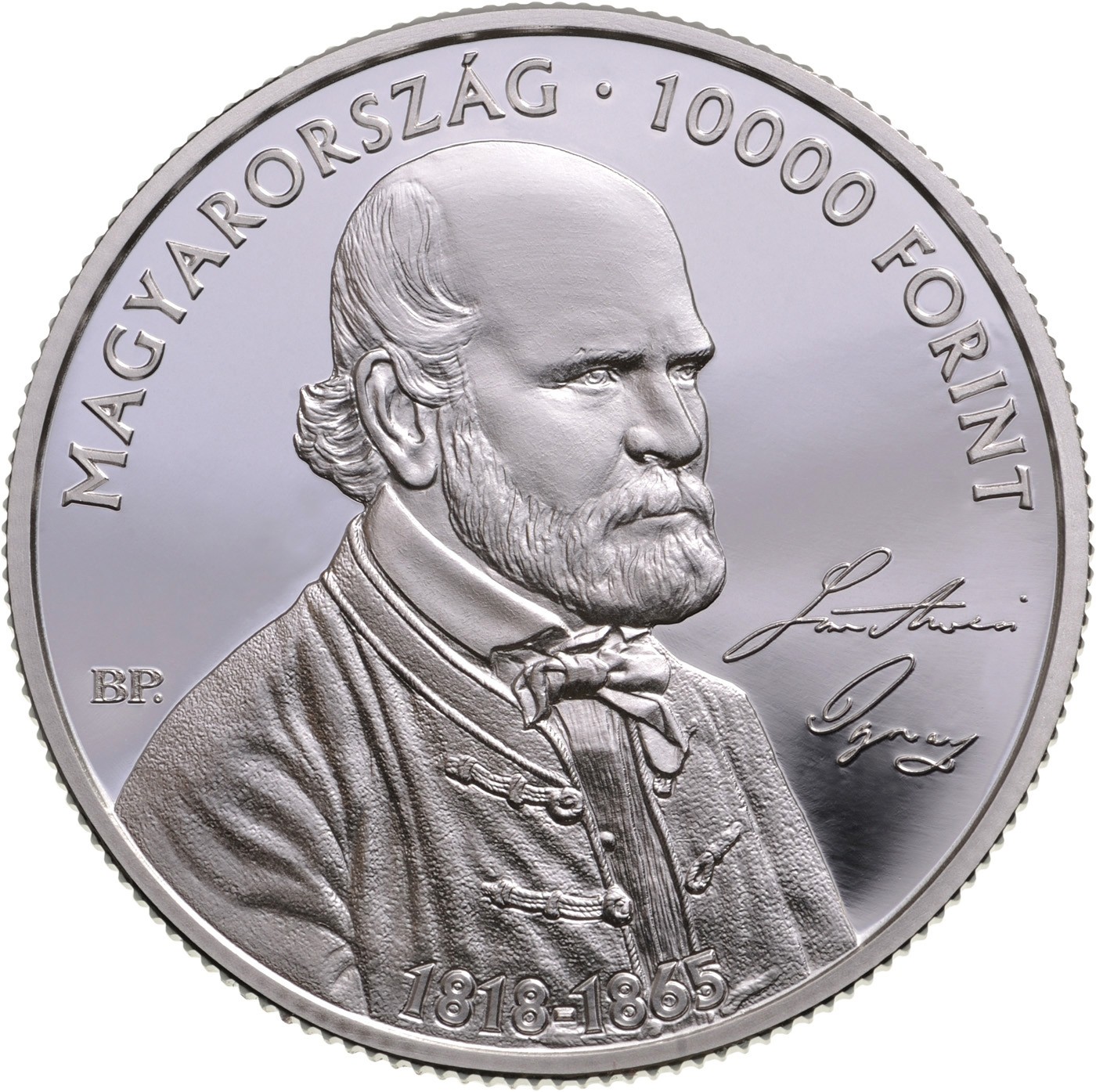 The coins are produced by the Mint of Hungary at their facilities in Budapest, on behalf of the National Bank of Hungary, and are designed by coin artist Gábor Kereszthury. The obverse features a three-quarter facing portrait of Semmelweis, with his initials next to it and a facsimile of his signature and the coin’s denomination placed above the portrait. The bottom legend 1818-1865 refers to his dates of birth and death. 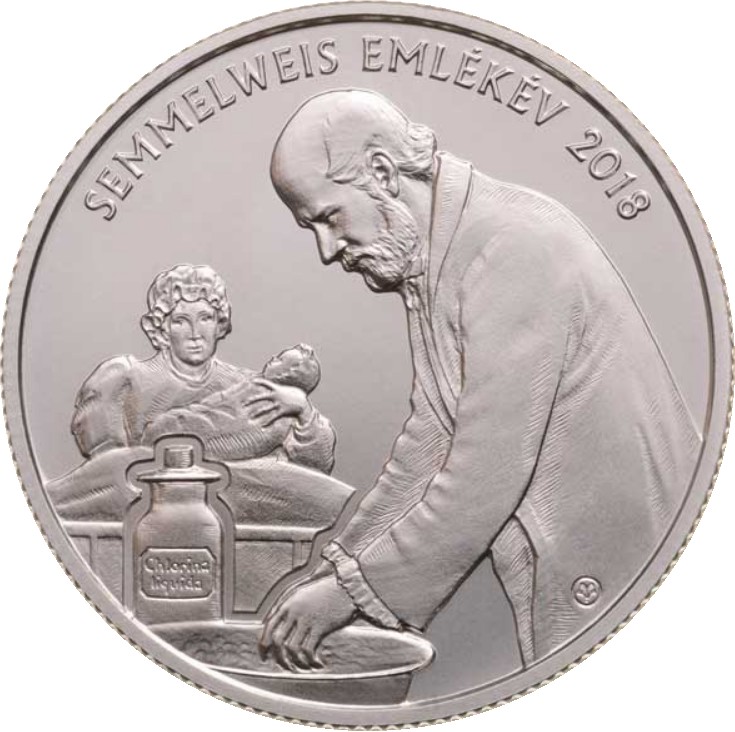 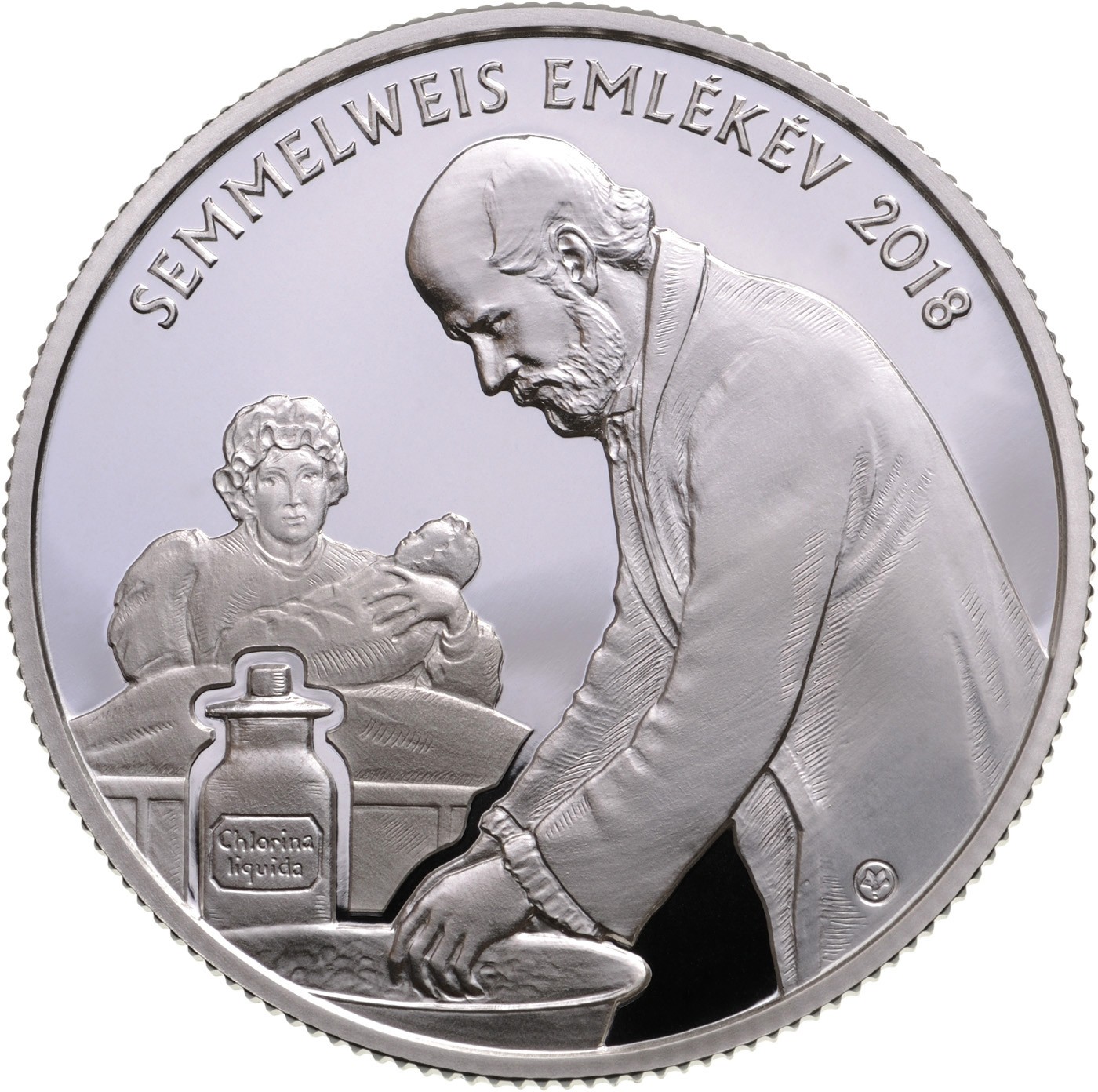 The central motif on the reverse of the coin replicates a hospital scene with Semmelweis washing his hands in the foreground while a mother and child can be seen in the background. Particular emphasis is placed on the bottle containing the chlorinated lime and the depiction of hand washing.