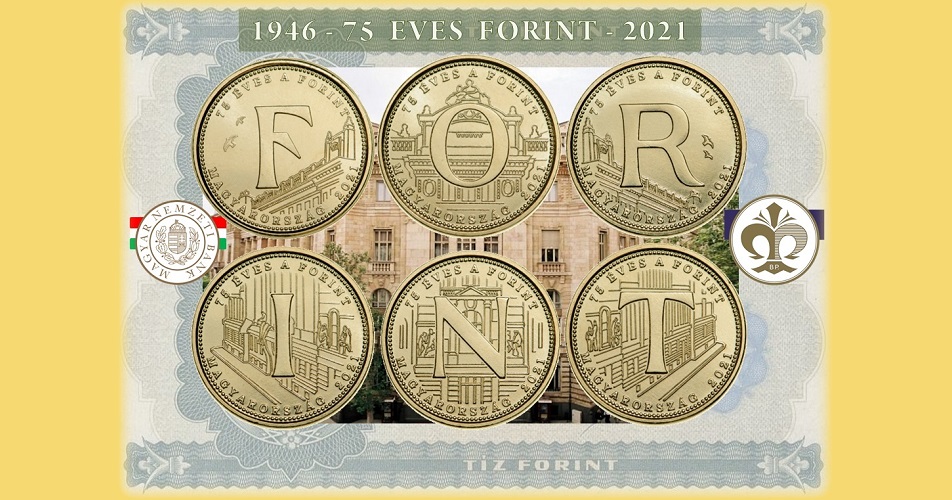 The National Bank of Hungary has released new five-forint (U.S. $0.017) commemorative coins which are in celebration of the creation and issuance 75 years ago of the national currency — the forint. The need to replace Hungary’s currency shortly after the conclusion of the Second World War was due to the rampant level of inflation the country suffered during and just after occupation. The pengő, which had replaced the korona currency in 1927, experienced the most serious case of hyperinflation ever recorded, so much so that, on average, consumer prices doubled every 15 hours. As a result, some of the largest-denominated banknotes were issued by the National Bank, resulting in the production of 100 million trillion pengő banknotes. The situation was untenable for both the government and national bank so a new currency was planned when the level of inflation could be brought under control. The name of the new currency was decided as the “forint,” so named as the word derives from the city of Florence in Italy and where gold coins called “fiorino d’oro” were minted from 1252. With the pengő having been rendered entirely worthless, an artificial conversion rate would have to be established which was posted as one forint = four × 1029 pengő — fundamentally dropping 29 zeroes from the old currency. Subdivided into 100 fillér, coins dated 1946 were introduced in denominations of two, 10, 20 fillérs and including one, two, and five forints. Banknotes first in denominations of 10 and 100 forints were issued with additional values of 20 and 50-forint notes by 1953. The 500-forint banknotes were first issued in 1970 and later 1,000-forint notes were released in 1983. 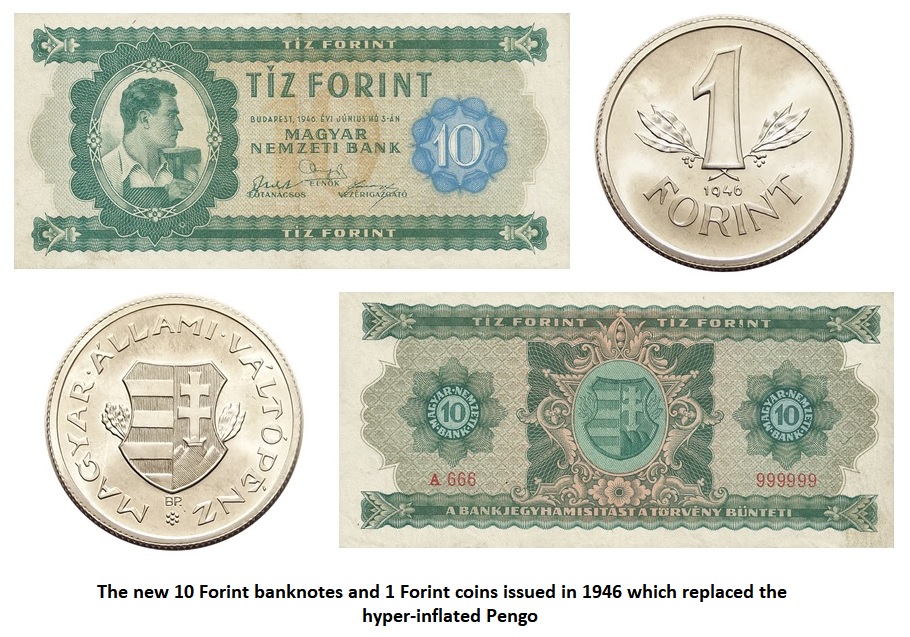 With the re-establishment of democracy in Hungary in 1989, coins were the first instruments of currency to be re-issued by the National Bank. In 1992, a new series was introduced in denominations of one, two, five, 10, 20, 50, and 100-forint. The currency was no longer divisible into filler. The five-forint coin is presently the smallest value in use since 2008. Afterwards, a new completely redesigned new series of banknotes in denominations of 200, 500, 1,000, 2,000, 5,000, 10,000, and 20,000 forints was introduced gradually between 1997 and 2001. This same series is still in use though some design alterations and upgraded security features have since been added to the notes. 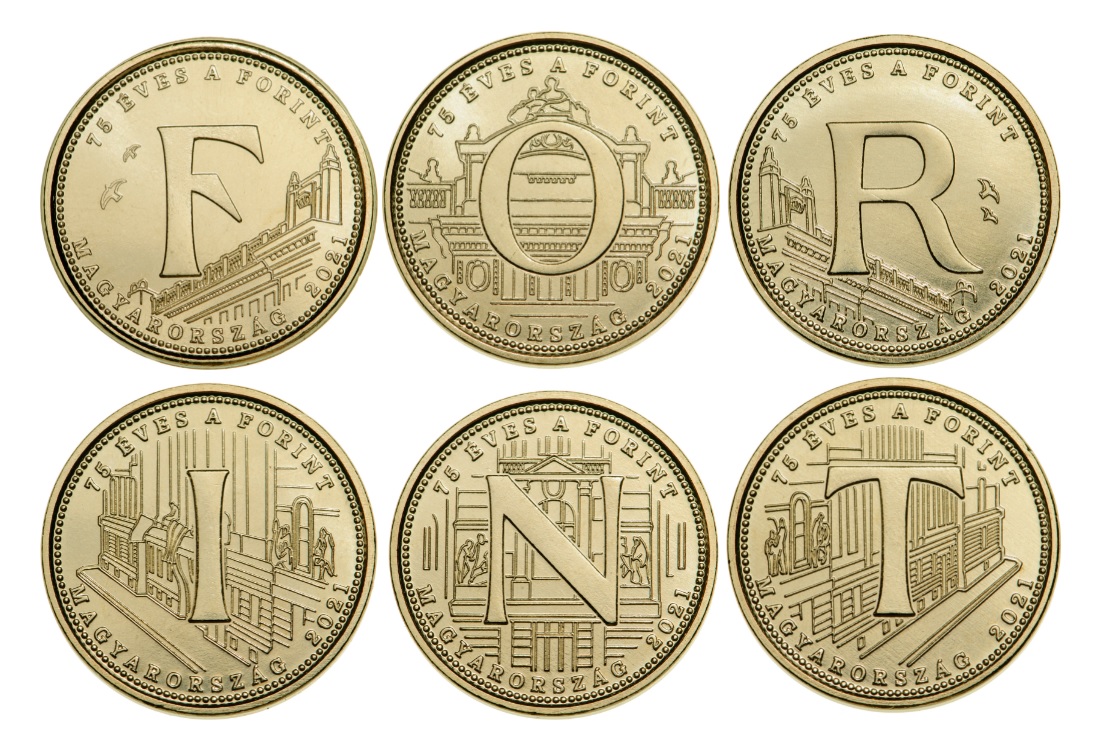 The new coins are produced by Hungary’s National Mint at their facilities in Budapest, on behalf of the National Bank, and are based on the graphic work of Mónika Gyuró. Each five-forint design, six in total, includes a portion of the side or corner edifice of the National Bank along with the letters “F,” “O,” “R,” “I,” “N,” and “T.” When placed together in a specific arrangement, a greater image of the National Bank can be seen as well as the name of the currency. The commemorative inscription reads 75 ÉVES FORINT and MAGYARORSZÁG (“75 years Forint” and “Hungary”). The reverse side includes the design of the five-forint coin with its value featured when it was originally released for circulation in 1992.

The National Bank will, from the 2nd August, issue each coin beginning with the coins featuring the letter “F” and will release them weekly in their appropriate order and in accordance with the spelling of the currency’s name. Each coin will have a mintage of two million pieces and at 12 million pieces total, they constitute the greatest mintage of commemorative coins ever released during the history of the forint currency or for any national event. 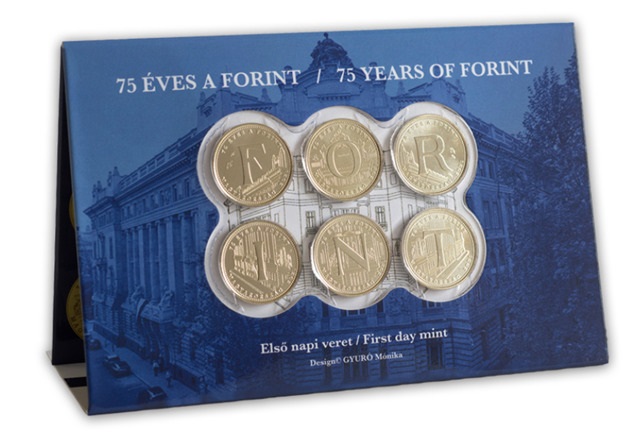 A complete set of Brilliant Uncirculated coins will be available numbering 12,000 sets and will be part of the overall mintage of each coin. 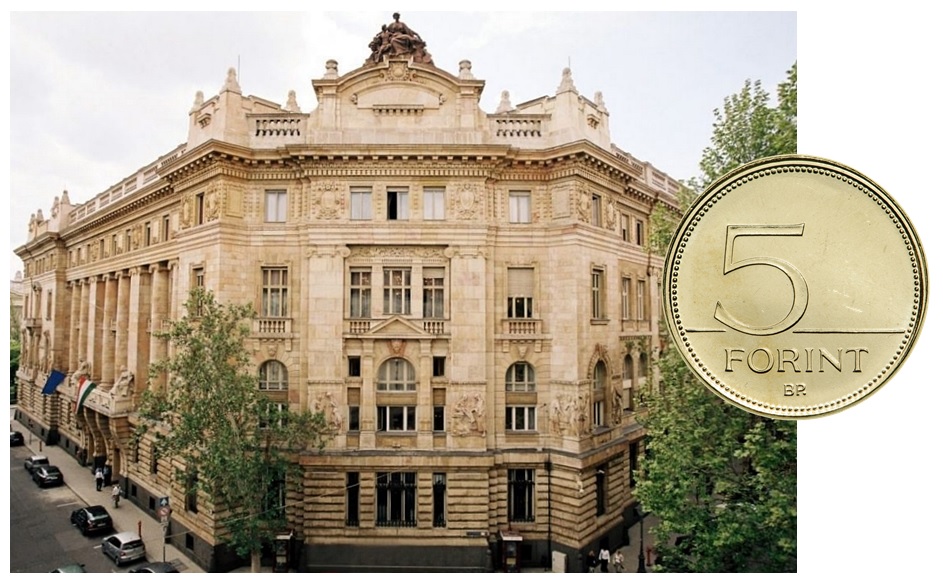 A specially designed folder is also available to house the complete set. For more information about these coins and others issued by the National Bank of Hungary, please visit the Mint of Hungary’s website.