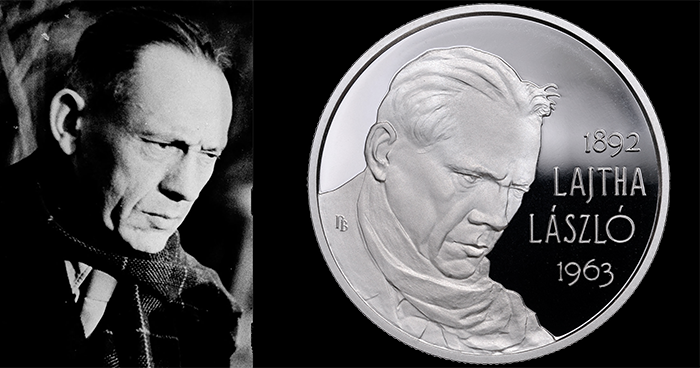 Foreground: obverse of the 5,000-forint Proof. Background: photo of Lásló Lajtha from the 1960s (photographer unknown).

The National Bank of Hungary have issued (24th June) a new coin which pays tribute to one of the country’s most respected and esteemed music composers, who is also remembered as a folk-dance researcher. László Lajtha was born 125 years this month in 1892. His contribution to Hungarian arts and music resulted in a resurgence of Hungarian folk dancing during the decade of the 1970’s. 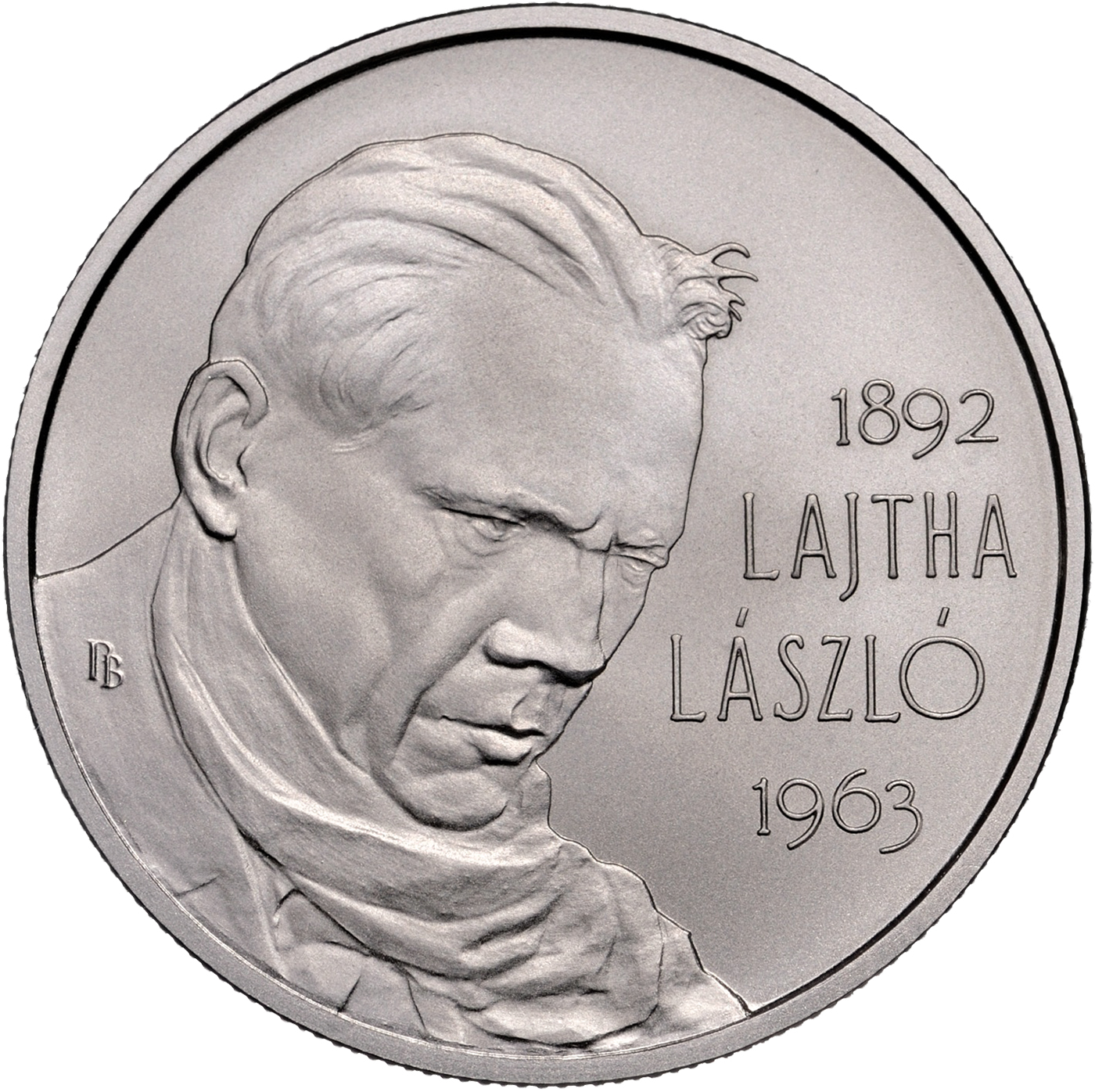 The coin is produced by the Mint of Hungary at their facilities in Budapest on behalf of the National Bank. The obverse of the coin is designed by Andrea Horváth and depicts a couple folk dancing in dynamic motion with musicians visible in the background, recalling Lajtha’s research on the subjects of both folk dancing and folk music. 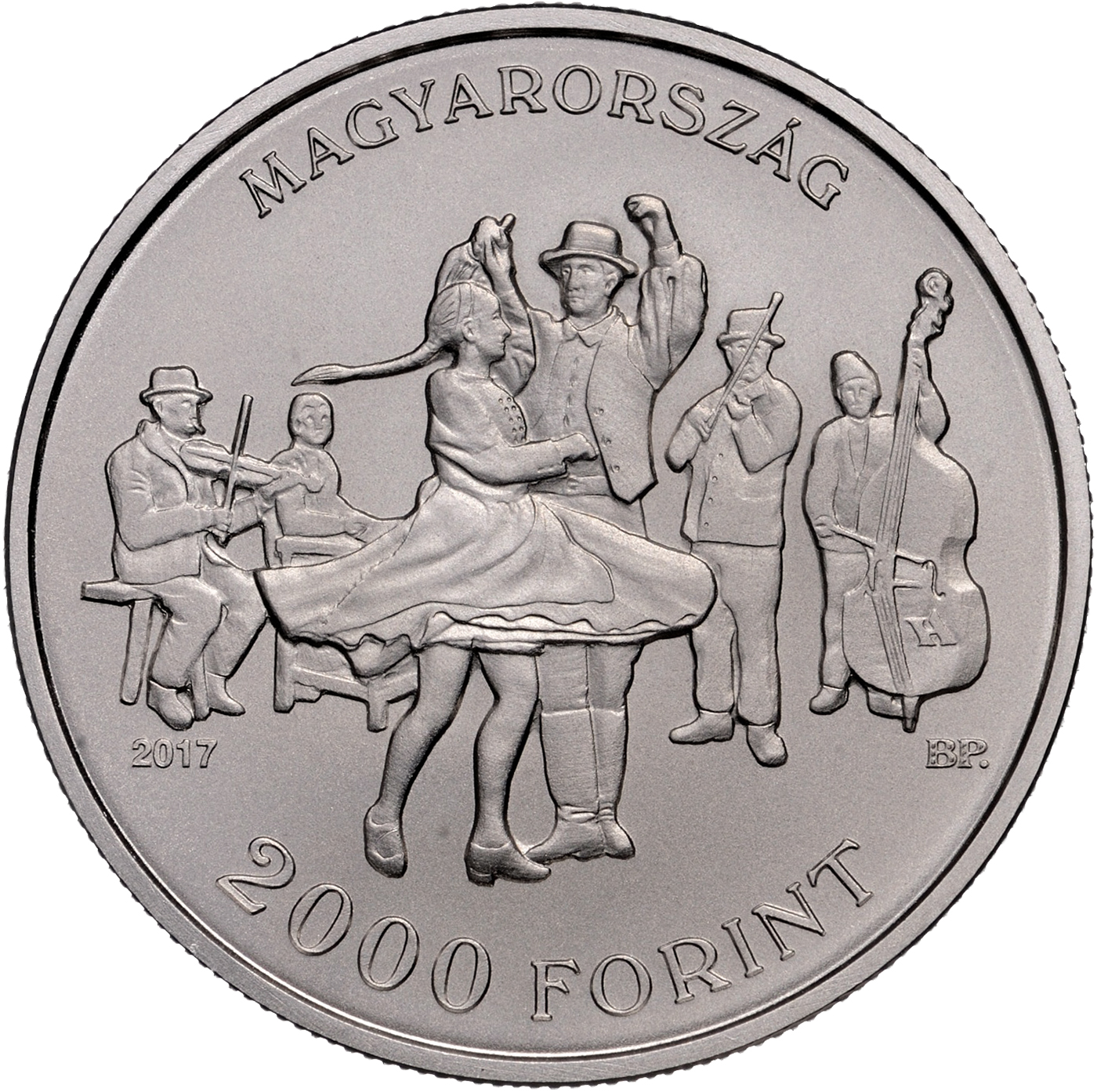 The reverse is designed by Balázs Pelcz, whose design is inspired by an original photographic portrait of the composer taken in the 1960’s.

Silver Proof 5,000-forint and base-metal Brilliant Uncirculated 2,000-forint versions of this collector coin are being issued; they share the same designs, except for their denominations. Please visit the website of the Mint of Hungary for additional information on this and other coins issued by the National Bank of Hungary.

László Lajtha (1892–1963), Hungarian composer and folk music researcher, was born in the Hungarian capital, Budapest, on the 30th June 1892, and was accepted into the preparatory class for piano at the Music Academy in Budapest in 1907.

In 1909, along with his instrument courses, he also began learning composition, where he studied with Zoltán Kodály in his first year. In the autumn of 1910, he was briefly a participant in Béla Bartók’s piano class at the academy. As with to Bartók and Kodály, folk music played an important part in Lajtha’s life as a researcher and composer, and he set off on his first tour of collecting music in 1911 at the behest of Bartók. During his years at the Music Academy, he also briefly studied abroad in Leipzig, Geneva, and Paris.

All of these impressions and experiences had a significant influence on his perspective as a composer, where his works were a unique blend of the pieces written by Bartók around 1910, French musical styles, and familiar Hungarian folk music. Lajtha obtained his diploma under Viktor Herzfeld in July 1913 and from 1919, for almost 30 years Lajtha was a member of the faculty of Hungary’s National Conservatory as well as briefly heading the institution during the Second World War.

It was during this time in 1939 that he introduced and instructed the subject of Hungarian folk music at the conservatory. The legendary detail of his notes on folk music and existing recordings formed the foundations for the Hungarian popular folk-dancing movement which would emerge in the 1970’s. He developed a very detailed methodology for recording folk dances and also stressed the need for video recordings of the dances. It is for his work in these two specific fields of art that Lajtha received the gold Kossuth Award in 1951 as well as being elected a member of the French Academy of Fine Arts in 1955.

László Lajtha died on the 16th February 1963 in Budapest. He was survived by his wife Rózsa Hollós and their two sons, László Lajtha Jr. (who became a world-renowned and prominent cancer researcher) and Ábel Lajtha (an internationally renowned neurologist and brain researcher). At the apartment where the Lajtha family lived, located at 79 Váci Utca in the centre of Budapest, a commemorative plaque has been placed on the structure. Since 2013, the impressive and priceless collection of Lajtha’s work is housed at the Institute of Musicology, Research Centre for the Humanities and Hungarian Academy of Sciences. That same year, and as a tribute to the great man and his work, a room commemorating him was opened at the Music History Museum, with the inclusion of a reconstruction of the original furnishings of Lajtha’s office from his flat in Váci Utca.   ❑