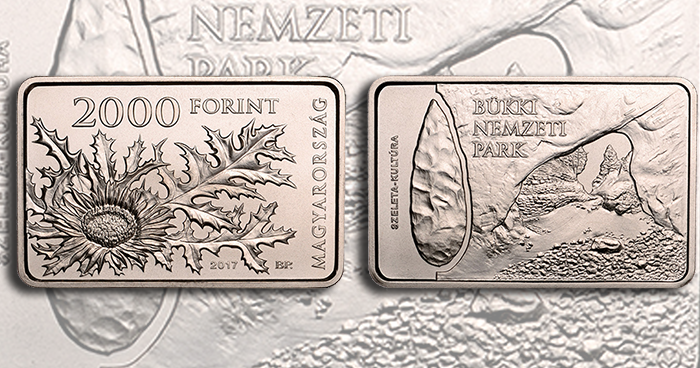 The National Bank of Hungary have issued their newest coin in their very popular and ongoing “National Parks of Hungary” series, which has featured some of the country’s most extraordinary national parks and landmarks. This year’s coin—the fourth in the series—features the Bükk National Park, considered one of Hungary’s most unspoiled areas of natural beauty and forested plains.

On the 1st January 1977, large parts of the Bükk Mountains were declared a national park, which accounted for roughly 95% of the heavily forested, protected area. The most common forest types in the Bükk Mountains are turkey oak and common oak, giving way to hornbeam oak in higher regions and beech in areas above 600 meters (almost 2,000 feet). One forest reserve in the Bükk National Park (BNP) is the Old forest, which has beech trees ranging from 180 to 200 years old. Extremely rare plants and animals live here, including the stemless carline thistle (Carlina acaulis), which is also the emblem of the national park. The directorate of the Bükk National Park is responsible for managing the protected natural values and areas, along with the areas protected under the Natura 2,000 programme and international nature-protection conventions. The directorate also oversees one national park, nine protected landscape regions, and 14 nature preserves of national significance, as well as one World Heritage Site: the Old Village of Hollókő and Surroundings. The nature conservation area “Ipolytarnóc Fossils” is also included and was awarded a European Diploma of Protected Areas.

The world’s first cross-border geo-park, the Novohrad-Nógrád Geo-park in Slovakia, includes several protected natural areas. The goal of the geo-park, which comprises 28 Slovak and 63 Hungarian settlements, is to preserve and present the geological, regional, and cultural heritage of the area and its traditions. 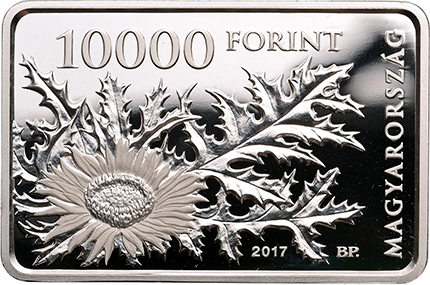 The coin’s designer, Gábor Kereszthury, wished to present the unique natural and cultural values of the park. The obverse of the rectangular coin bears the emblem of the national park, the stemless carline thistle. 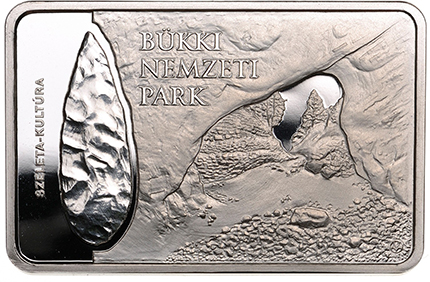 The reverse depicts Szeleta Cave, as seen from the interior. Szeleta Cave was the first site in Hungary where prehistoric human artefacts were discovered after the Ice Age. The caves were inhabited for tens of thousands of years by members of the Szeleta culture, which left behind bay-leaf-shaped spearheads and other implements. One of these spearheads found in the cave and dated to about 40,000 years ago features in the reverse design, separate from the main motif.

To mark the 40th anniversary of the park’s foundation, the Magyar Nemzeti Bank has issued the fourth coin in the National Parks in Hungary series in both a 10,000-forint silver and a 2,000-forint base-metal format.

Please visit the website e-shop of the Mint of Hungary for more information on this and other coins issued by the National Bank.   ❑