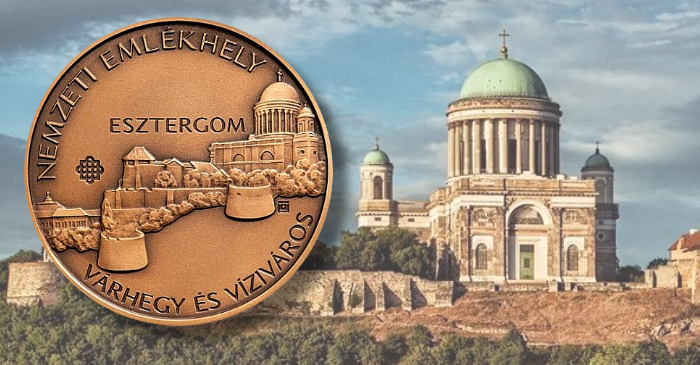 This is the sixth coin issued as part of the annual “National Memorial Sites” series begun in 2014. This series offers a valuable contribution to highlighting and depicting various Hungarian national memorial sites such as Somogyvár-Kupavár, Mohács, the New Public Cemetery in Rákoskeresztúr, Fiumei Road Cemetery, and the parliament building and its neighbourhood.

This memorial site is particularly relevant in Hungarian history, as Esztergom played a crucial role in Hungarian history over the centuries. This site was established by Géza, grand prince of the Hungarians, when he moved his seat to the town. His first son was born here, who was crowned here as Stephen, or St. Stephen I, the patron saint of Hungary. Stephen founded 10 episcopacies in Hungary, headed by the archbishop of Esztergom, which at that time was the centre of royal power in Hungary until the middle of the 13th century. Counts and nobles were obliged to take the taxes to Esztergom every year; however, the only mint office or works in the country was also located here. The town provided the venue for several congresses attended by kings. The former royal castle, where all of these historic meetings and summits took place, is now a museum. Following the Mongol invasion, the town lost its functions as a governmental centre definitively but continues to be the centre of the Hungarian Catholic Church to this day. Being the largest and first church in the ranking in the country, the Basilica of Esztergom was built where the cathedral stood in the Middle Ages. Surrounded by the Castle Hill, the Little Danube, and the Danube, the strip of land directly below the royal castle was called “archepiscopal town,” but today it is known as Víziváros.

The Primate’s Palace and the collections of the head diocese still reside here, as well as the library in the main cathedral, the Primate’s archives, the Archiepiscopal Simor Library, and the Museum of Christianity. Along with the other archepiscopal collections in the castle area is the treasury of the Main Cathedral, the Main Chapter Archives, and the Theological College of Esztergom Library. 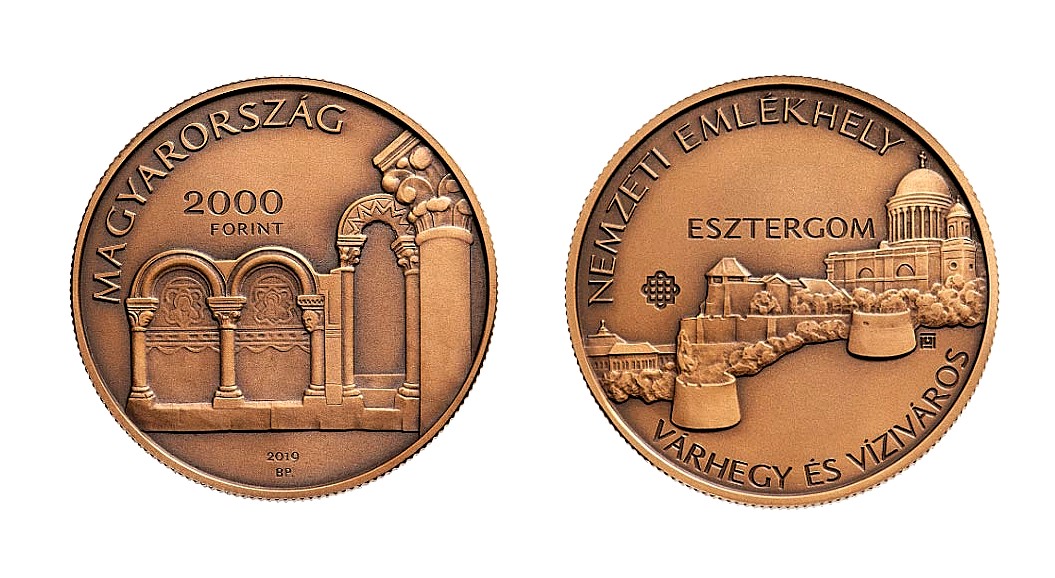 The coins are produced at the Mint of Hungary at their facilities in Budapest and are designed by applied artist Zoltán Tóth. The obverse depicts part of the Esztergom royal castle chapel inner wall with a sitting bay decorated with wall paintings depicting apostles. The denomination 2000 and the lettering FORINT are shown above the central motif, arranged as two lines above each other and aligned to the right. To the left of the denomination, in the upper portion, is the lettering MAGYARORSZÁG, and at the bottom in the middle is the mint year 2019 and the mint mark BP, which are placed in two lines above one another.

The reverse side includes a reduced image of the memorial site as viewed from the south side, highlighting the emblematic buildings in the area such as the Primate’s Palace, the castle itself, and the main cathedral. Appearing on every coin in the annual series is the national site logo which is incorporated in the overall design. The master mark, or insignia of the coin designer Zoltán Tóth, is shown to the lower right of the primary design. The lettering NEMZETI EMLÉKHELY is seen above the primary design and ESZTERGOM is placed just above the castle while in the lower edge below the castle is the lettering VÁRHEGY ÉS VÍZIVÁROS.

Each coin is encapsulated for protection and is accompanied by a certificate of authenticity. A presentation case is available separately. For additional information about this coin and other coins issued by the National Bank of Hungary, please visit their website.

Collectors in Budapest can also visit the retail shop of the National Bank at 7 Báthory street, Budapest, distr. V.

Ordering Information for Interested Collectors in the United States

To order, or for more information about these coins and other coins of Hungary, contact the Hungarian Mint’s North American Representative at P.O. Box 399, Williston, VT 05495, call toll-free at 1-800-421-1866, fax 802-536-4787, or e-mail . Shipping to other countries will be based on actual cost. Vermont residents add 6% sales tax. Those desiring to receive information and photographs electronically on a regular basis can provide their email address to .