The National Bank of Hungary have announced the issue of a gold coin which celebrates the 200th anniversary of the birth of one of Hungary’s most noted and celebrated composers, Franz Liszt, who was born on the 22nd October 1811. Considered to be one of the greatest pianists of all time and a master of Romanticism, Franz Liszt was born in the village of Doborján (present-day Raiding, Austria), in the county of Sopron.

Liszt was an incredibly impressive pianist, a bold, ground-breaking composer, a masterful conductor, and a widely-respected teacher and writer on the subject of music. His almost-forgotten Hungarian roots came to mind again as a result of the great flood of Pest in 1838, when he gave a massively successful series of benefit concerts for the flood victims in Vienna. Already a renowned musician, he first returned to Hungary at the turn of 1839/40, where he premiered as a conductor and was awarded a ceremonial sabre on behalf of the nation for his patriotism. His last home in Budapest is now the Franz Liszt Memorial Museum. 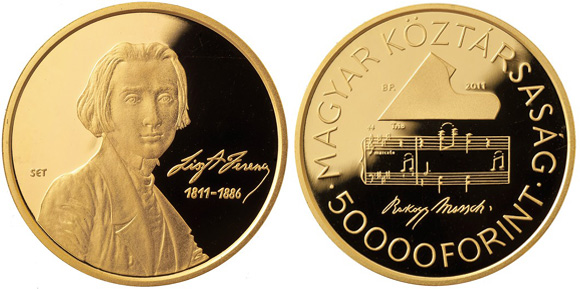 The coin, which is struck by the Mint of Hungary in Budapest is designed by Tamás E. Soltra, and depicts Liszt as a young man based on the portrait by Ingres. To the right of the portrait, is a facsimile of Liszt’s signature and the years “1811 – 1886”. The reverse features the hand-written script “Rakoczi Marsch” under a piano lid and a portion of the sheet music. The coin’s denomination of 50,000 Forint is below the primary design with the text “MAGYAR KOZTARSASAG” above.

The coin is struck to proof quality and in standard ducat gold fineness (.986) with a weight 6.9 grams with a diameter of 22 mm. The authorized mintage of this coin is limited to 5,000 pieces. A special piedfort edition will also be produced with a total weight of 13.9 grams and a limited mintage of 1,500 pieces. Unique to this version will be the edge lettering around the coin which reads: “MINT MAGYAR HAZÁMNAK HŰ FIA: LISZT FERENC” (As a loyal son of the Hungarian nation: Ferenc Liszt).

The coin’s official release date was the 21st October, one day before the actual anniversary. For more information on this and other coins offered by the National Bank of Hungary, please visit the Mint of Hungary’s website at: http://coins.hu/