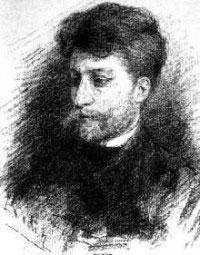 The National Bank of Hungary have issued two new commemorative coins which remember the centennial of the death of artist Bela Spanyi (1854 – 1914) who is recognized as one of Hungary’s best painters of landscapes and scenes of natural outdoor beauty.

Spanyi’s name has long been referred to as the first order among Hungarian landscape painters. The rich life’s work of Spányi was focused entirely on landscape painting. He combined the seemingly insignificant natural landscapes with a very well-defined mood through his works. Born in Budapest, Spanyi took quickly to his artistic studies, later spending three years in Vienna, then traveling on to Paris and Munich as part of perfecting his talent. His time in Munich was of particular significance and professional success as his works were in great demand from the Bavarian art dealers, Spanyi even attracted the attention of Bavaria’s Prince-Regent, later King Ludwig III, a well-known patron of fine art.

It is widely accepted that many of Spanyi’s paintings are scattered around the world, but most of his work remains within the country, most notably in the collection of the Hungarian National Gallery. In 1889, Spanyi was honored in Berlin by the Fine Arts Society and received their Grand Prize medal as well as an honorary diploma from their institute. Among some of Spanyi’s works honored during his lifetime were “Autumn Morning” (Gyorgy Raft award – 1882), “Reed-taking,” & “Autumn sunshine” (1893). In 1893, he created five large frescoes in the Hunters’ Hall of the Hungarian Parliament. Spanyi died on the 12th June 1914 and is buried in Budapest.

The coin, designed by Enikő Szöllőssy, includes a landscape inspired by Spányi on the obverse. A portrait of Spanyi, as he appeared as a young man, is seen on the reverse along with the coin’s denomination and year of issue. The proof quality coin is available either on its own or with presentation box.

In an effort to encourage younger generations to collect commemorative coins, The National Bank of Hungary and the Mint of Hungary have teamed up to produce a non-precious metal version of commemorative silver and gold examples to benefit collectors wishing to buy the same artistic theme at a more affordable price. These coins have a nominal value of 2000 forint and are available for their respective face value.

For more information on this and other coins on offer by the Mint of Hungary, please visit their website at: http://coins.hu/ Information offered in Hungarian and English – international orders dispatched.