In the classic commemorative series there are a total of 50 different designs and 144 date/mintmark combinations. Of these, many are affordable for collectors on a budget, such as the Booker T. Washington and Washington-Carver half dollars struck at the end of the classic commemorative coinage era. Others, however, are a different story. The two $50 gold pieces struck for the 1915 Panama-Pacific Exposition come to mind, as does the 1928 Hawaiian Half Dollar. Another rarity within the series is the 1935 Hudson Sesquicentennial Half Dollar. Its mintage of 10,000 coins (plus eight coins struck for assay purposes) is on par with the 1928 Hawaiian Half Dollar and the 1935 Old Spanish Trail Half Dollar, all considered key issues within the classic commemorative series.

The city of Hudson, NY was founded in 1785 and is located in Columbia County. The land on which it is located was part of the Dutch Colony of New Netherland, after the area had first been explored by Henry Hudson, who was employed by the Dutch East India Company (a company that is known as the first corporation in the world and played a vital part in the success and riches of the Dutch Republic in the 17th century). Hudson’s main purpose was to seek a direct route to Asia, but in the process he claimed much of modern-day New York for the Dutch Republic.  European settlement in the area remained sparse until the late 19th century, when numerous towns sprang up in the area, including Hudson.

The city of Hudson was founded by New England whalers and others from the Martha Vineyard region and quickly grew after initial settlement, becoming a relatively large city (with a population of approximately 2,500 in a time when few towns had more than a few hundred inhabitants) as early as 1790. The city continued to grow and under its early citizens included US President Martin Van Buren (of Dutch ancestry, who opened his first law office in Hudson) and General William J. Worth, who would play a vital role in securing Texas for the United States in the Mexican-American war. Today Hudson is a quiet city of approximately 6,700 people. 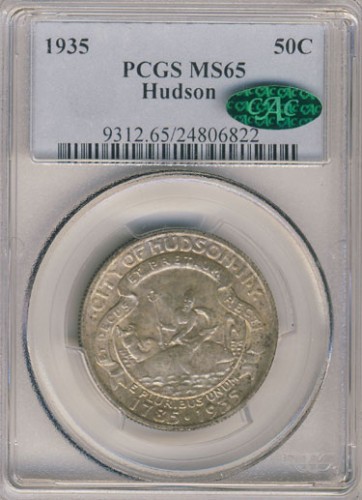 The 1935 Hudson Sesquicentennial Half Dollar was issued to commemorate the 150th anniversary of the founding of the city. Around this time, there were quite a few sesquicentennials celebrated throughout the country, since new towns sprang up quite abundantly in the young United States during the late 18th century. Nonetheless, the city of Hudson would take the national stage with the issuance of a commemorative half dollar struck specifically for their celebration. Congressional legislation authorized for a total mintage of 10,000 commemorative half dollars, a small number but still greater than the initial proposal for just 6,000 coins to be struck and released.

Up to this point everything was plain and simple, and the Philadelphia Mint struck the coins in June of 1935, delivering them to the First National Bank and Trust Company of Hudson, NY later that month. Orders were taken at the original issue price of $1.21, which included an eighteen cent fee for registration and three cents for postage. Orders trickled in, but suddenly, on July 2nd, the issue was announced to be sold out, a record for any commemorative issue up to that point. What was the reason? It would turn out that two dealers, the Guttag Brothers (of Albany, NY) and Hubert W. Carcaba (of St. Augustine, FL) had placed orders of respectively 7,500 and 1,000 coins, representing an astonishing 85% of the total mintage. It would not be the first nor the last of the commemorative half dollars that were purchased by dealers for profit (the Boone Commemorative Half Dollars come to mind as well), but this grand scale was unheard of.

Collectors received their payments back after the issue was sold out, and complaints soon were heard around the country. The coins, however, were certainly available on the marketplace, and prices soon rose to well over ten dollars each. Demand remained high and it appeared to be quite a profitable venture for both dealers, especially since only 10,000 coins had been authorized and struck, making it a very scarce coin from the start.

The coins that would receive so much attention from the numismatic world were designed by Chester Beach. The obverse featured the Halve Maan, or half moon, Henry Hudson’s ship from which he explored the river that would later be named after him. A small, crescent moon, is seen above the sails, and it’s quite obvious that the ship is on open sea. The name HUDSON is seen directly below the ship, curved, and below that is the denomination, HALF DOLLAR. Above the ship is the motto IN GOD WE TRUST, and UNITED STATES OF AMERICA runs along the rim from 9 to 3 o’clock. A small B, signifying the designers initial, is seen next to the ship on the left side.

The reverse features the seal of the city of Hudson, NY. We see Neptune riding (backwards) on a whale, holding his trident in his hand, with a mermaid blowing a horn behind him. On a scroll that is surrounding the scene we see the motto “ED DECUS ET PREIUM RECTI”, which translates as “Both the honor and reward of the righteous”. Above this scroll we see the words •CITY OF HUDSON•N•Y• and below the scene is the motto E PLURIBUS UNUM. Under that, along the bottom periphery, are the dual dates 1785-1935.

Despite the fact that distribution of this coin was rather sketchy, it would prove to be a popular issue that remains in demand up to this day. Examples, however, are quite abundant on the marketplace, most likely because of the relatively high-prices that this issue brings at auction. While examples in the lower uncirculated grades are costly but available, true gems (MS-65 or better) certified by the leading grading companies are genuinely scarce with populations at the MS-66 and MS-67 levels being very low.