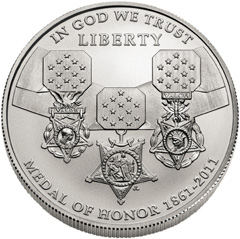 As readers of this web site know, I have generally been supportive of the U.S. Mint and believe it is sometimes the subject of excessive criticism. At the same time, there is no question that there are many areas where the Mint could do a better job such as with its web site and by issuing more coins with compelling designs. I also think a real-time precious metal pricing system similar to what most coin retailers use is urgently needed.

During most of the period that I have been ordering coins directly from the U.S. Mint by mail, I have been pleased with the quality of the items I received. But in the past year or so I have definitely noticed a decrease in quality control, and judging from what I read from other collectors, I am hardly alone.

For example, the Medal of Honor uncirculated silver dollar I received in the spring has an odd color around the inside rim. I did not return it because many collectors received coins that look similar from what I have read, and I probably would have received a similar looking coin if I had returned it. In addition, when I received my Hot Springs 2010 P, I wanted to check out the coin and put it with the reverse side showing instead of the obverse side, which is how it arrived. But the coin had been pushed so tightly into the box that when I tried to carefully remove it, the top of the capsule popped right off, and I almost damaged the coin. When the next silver America the Beautiful (ATB) five-ounce collector coin arrived, the Yosemite 2010 P, I had to open the capsule to remove a piece of white string that made its way inside by blowing it off with a can of compressed air. However, both coins did not have any scratches or other types of distracting marks, so overall I was pleased.

Some collectors may not know this, but if you live in or near a city which has a U.S. Mint facility that gives tours, including those at Philadelphia and Denver, plus two locations in Washington, DC, there is a better way to buy your U.S. Mint coins than ordering online. Those facilities operate sales counters and kiosks where customers can purchase almost everything the Mint sells on its web site with the exception of coins with household limits such as the numismatic versions of the ATB silver coins. 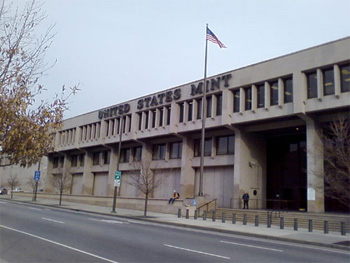 Coins are available there the day of issue in most cases, according to sales associates I spoke with at two of the locations. You can also get ATB quarters and Native American dollars for face value and pick up coin bookmarks and Mint literature. For information on hours and other details, see this page from the Mint’s web site: http://www.usmint.gov/mint_tours/

So, if, for example, you are planning to make a major purchase such as buying the latest First Spouse gold coin, or the 2011-W American gold eagle, you can go to purchase your coins at one of the sales counters rather than wait for your coin to ship and then worry about it reaching you safely.

There are several advantages to doing so. First, you can pick out the coin you want to purchase after studying several examples and finding the one you think is of the highest quality. If you plan to have you coin graded, this gives you a far better chance of getting a 70, especially if you bring your loupe with you so you can examine the coin closely. Second, you do not have to worry about processing times, the shipment of the coin, or being there when it is delivered. Third, just as is the case on the Mint’s web site, no sales tax is collected on in-person coin sales.

Fourth, there are no postage costs, though clearly there are transportation costs, especially if you do not live in one of the three cities. It may not be worth it if you live far away. But say you live within an hour or two of Washington, DC, it may be worth going for a couple hours or making a day of it. You can buy your coins in person at either the sales counter in Union Station (where you will arrive if you take Amtrak or the Maryland commuter train) or the one that was recently opened at U.S. Mint headquarters. While there, you could visit the National Numismatic Collection at the Smithsonian, which has many of the greatest rarities in coin history such as the 1933 Double Eagle and the unique 1849 Double eagle pattern. If you can’t make it to DC, check out these pics of some of the highlights of the Smithsonian collection:  http://forums.about.com/n/pfx/forum.aspx?tsn=1&nav=messages&webtag=ab-coins&tid=2790