Could the United States Mint have produced 2009 collector Gold and Silver Eagles and remained within their legal obligation to produce bullion coins in quantities sufficient to meet public demand? 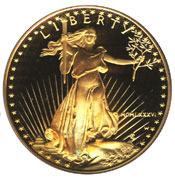 The Mint has attributed their failure to produce the collector coins to their legal requirement to produce bullion coins in quantities sufficient to meet the public demand. In the face of ongoing unprecedented demand for the bullion coins, the Mint has been sourcing all incoming 22 karat gold and silver blanks to the production of bullion coins. Collector coins, which are not legally mandated, have not been produced.

The situation as described by the US Mint makes it seem that even if they wanted to produce collector coins, it would be illegal for them to do so. I am a strong believer in the proverb, “Where there’s a will, there’s a way,” so I decided to take a look at the laws covering the production of bullion coins. As a disclaimer, I am not a lawyer and do not have a legal background. I am interpreting what I have found to the best of my ability.

As the US Mint has stated on many occasions, the production of Gold and Silver Eagle bullion coins is mandated under Public Law 99-185 and Public Law 99-61*, respectively. In addition to authorizing the bullion coins, the laws also describe the denominations, specifications, designs, inscriptions, minting and issuance of coins, pricing, and precious metals sourcing.

The section of Public Law 98-185 now often quoted by the Mint is the following:

Notwithstanding section 5111 (a)(1) of this title, the Secretary shall mint and issue the gold coins described in paragraphs (7), (8,) (9), and (10) of subsection (a) of this section, in quantities sufficient to meet public demand

This is the source of the US Mint’s claim that they are legally required to source all incoming 22 karat gold and silver blanks to the production of bullion coins, until such a time as they are able to meet the full public demand.

I would like to highlight the following additional section of the law:

The Secretary shall acquire gold for the coins issued under section 5112(i) of this title by purchase of gold mined from natural deposits in the United States, or in a territory or possession of the United States, within one year after the month in which the ore from which it is derived was mined. The Secretary shall pay not more than the average world price for the gold.

This section describes some very specific rules for the sourcing of precious metals for the production of the bullion coins. The metal must be (1) from natural deposits in the United States; (2) mined within the past year; and (3) acquired for not more than the average world price. The US Mint presumably works with their suppliers to ensure these stipulations are met.

Notably, Public Law 99-185 and Public Law 99-61 only authorize and describe bullion coins. The collectible proof and uncircualted versions of the coins are not authorized, described, or mentioned anywhere in these laws. As the US Mint has said, these coins are “not mandated by law.” While this means that there is no requirement to mint and issue collector coins (in quantities sufficient to meet public demand), it should also mean that the stringent sourcing requirements for precious metals do not apply to the collector coins.

Putting this together, the US Mint has a loophole by which they could have produced coins for collectors and continued to fulfill their legal obligation to produce bullion coins.

All they would have to do is purchase gold and silver blanks that were either not mined from domestic sources, not mined within the past year, or purchased for more than the average world price of gold. By law, it would be illegal to use their blanks to produce bullion coins. The US Mint would be free and clear to legally use these blanks for the production of collector coins.

I posed two questions to the US Mint to help solidify the validity of this situation. By the time of posting, I have not receive a response. Any response will be posted upon receipt. My questions were the following (updated at 11:48 AM with US Mint responses and links added. I will examine the responses more closely, but it seems to leave open the possibility that at least the 2009 Proof Silver Eagles could have been legally produced.) :

1.) Under what authority does the United States Mint produce collectible proof and uncirculated American Gold and Silver Eagles? ( I realize that the bullion coins are covered under Public Law 99-185 and Public Law 99-61, but these laws do not seem to contain authorization for proof or other collectible coins.)

2.) Corollary to question 1, are the collectible proof and uncirculated American Gold and Silver Eagles legally bound to the same precious metals sourcing rules as the bullion coins? (i.e. gold mined from natural deposits of the United States, within one year after the month the ore was mined, at not more than the prevailing price of gold)

All gold coins that the United States Mint currently produces must comply with this requirement. The requirement to purchase gold mined from natural deposits of the United States at 31 U.S.C. § 5116 addresses coins issued under § 5112(i) . The First Spouse and American Buffalo Gold coins have identical provisions at 31 U.S.C. §§ 5112(o)(7)(A) and 5112(q)(4)(A), respectively. These requirement apply to all coins, regardless of their quality–bullion, uncirculated, or proof. Section 5116 is more flexible concerning the purchase of silver, especially when obtaining newly-mined domestic silver is not economically feasible.

* I could not find the full text of this law available online, but based on summaries, I believe the language regarding production quantities and sourcing is the same as the law concerning Gold Eagle coins.