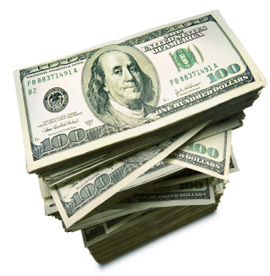 A huge part of the problem in analyzing US government expenditures is that such records are pretty much kept on a cash flow basis rather than the more accurate accrual basis of accounting required for publicly held companies.  Under accrual accounting, the important information is what the organization actually took in as receipts and spent for expenses and capital goods, no matter whether they involved cash changing hands during the actual fiscal year or were amounts that would be settled at some point in the future.

This extra $5.3 trillion of government spending received little coverage by the rest of the mainstream media.  Yet even USA Today admits that this figure is too low.  For example, the computation assumes for Medicaid that all 165 of the cost saving measures in last year’s health care reform law will be achieved, including cutting physician payments by 30% by the end of 2012.

To give you a better handle on how much the federal government really spent for fiscal 2010, let me take the official numbers from the feds, and add the extra amount calculated by USA Today (by the way, this newspaper has done an annual update of these figures since 2004) into the totals.  As part of my analysis, I will take an extremely conservative position that 100% of the reported fiscal 2010 welfare payments were attributed to prior years.

Note:  amounts are reported in billions of US dollars

The latest census reports the US population at 311.4 million.  If you compute the spending and deficit figures per capita, here is what you get:

From these numbers, I think you can see that when Congress or the president talks about cutting spending by $10 billion, $20 billion, or $38 billion, it is a relative drop in the bucket!

USA Today published a second article recapitulating the actual accumulated deficit of the US government as of September 30, 2010, which is substantially higher than the $14+ trillion that the politicians are arguing about today.  The components include:

Note:  although these are the specific numbers reported in the USA Today article, (http://www.usatoday.com/news/washington/2011-06-06-us-debt-chart-medicare-social-security_n.htm), the newspaper contends that the total amount not reported by the US government is only $61.6 trillion.

Politicians and bureaucrats in Washington are spending all their time trying to appear that they are addressing the problem of huge government spending and deficits while only considering the smaller inaccurate data.   Unless Congress and the president can tackle the correct problem of $21,000 per person per year of federal expenditures and $14,000 per person per year of budget deficits, the US dollar will continue to get weaker and consumer prices will continue to rise.

The US political system is not conducive to dealing with the truth about what is really occurring with the US economy.  It is far easier for politicians to obfuscate and lie to the public, and look for temporary patches that will hold until the next election.  Unfortunately, this attitude almost certainly will mean, at a minimum, the eventual collapse of the US dollar.

Individual people don’t have the ability to fix the systemic problems of the US government.  However, they do have it in their power to replace some of the US dollars in their wallets and bank accounts and their paper assets such as stocks and bonds that are denominated in US dollars with tangible assets where the values are not government-influenced:  gold, silver, non-perishable food, and other survival essentials.  It is not yet too late to take action.