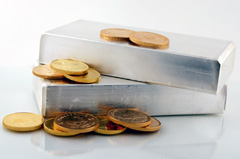 There were certainly a number of reasons for the US government and its trading partners and allies to want to knock down gold and silver prices early this week.  Though there are any number of factors that influence prices, here are just some of the reasons why precious metals prices needed to get clobbered.

If you have watched the market, you saw the price of gold decline a bit over 2% and silver drop over 5% from its highs reached in Asian and European markets early Monday.  The mainstream media, as usual, got it wrong when it reported that the decline was due to “profit taking.”  Here’s some of what really happened.

Even though, in my judgment, gold and silver prices continue to be in a long-term bull market, prices will not rise in a straight line.  What we have seen in the past few years is that the periodic price drops, whether as a result of free market actions by investors or outright price suppression at the direction of the US government, are of a lesser percentage than before and are of shorter duration.  In effect, the temporary drop in prices this week will likely prove to be another bargain buying opportunity.

Meanwhile, there is another factor affecting the trading of physical gold and silver this week.  It has been a consistent pattern for several years that there is a decline in demand in US markets around the deadline for filing personal income tax returns.  Typically, demand slows down about a week before April 15 (April 18 this year) and does not pick back up until a couple days after that deadline.  Although my companies have seen significant demand for silver (mostly) and gold (to a lesser degree), it definitely looks like this pattern is happening again this year.  In our judgment, we would have sold much more gold and silver this week were it not for the occurrence of the annual tax deadline.

There are many more reasons why the US government might want to suppress gold and silver prices.  There is also a huge arsenal of tactics that could be employed for that purpose.  At the most extreme, we could see a repeat of a rules change that the COMEX adopted in January 1980 at the gold and silver market peaks.  At one point back then the COMEX prohibited anyone from purchasing a new long silver contract and would only permit parties who owned long contracts to liquidate them back to the parties who held short positions.

This rule change back in 1980 was done specifically to punish two private silver investors, the Hunt Brothers.  There are no “villains” as such this time around as the demand for silver (and gold) is extremely widespread and includes several governments and central banks.  Should the US government push for an identical rule change today, it would be punished by other nations who would sell off their dollars and US Treasury debt.  So, while I don’t anticipate such an extreme rule change in the foreseeable future, other lesser rule changes are quite possible.

Just keep in mind that the more extreme the efforts by the US government and its trading partners and allies to hold down gold and silver prices, the higher the prices will eventually climb.  Don’t be fooled into selling your physical gold and silver because you think that prices will be held down forever.