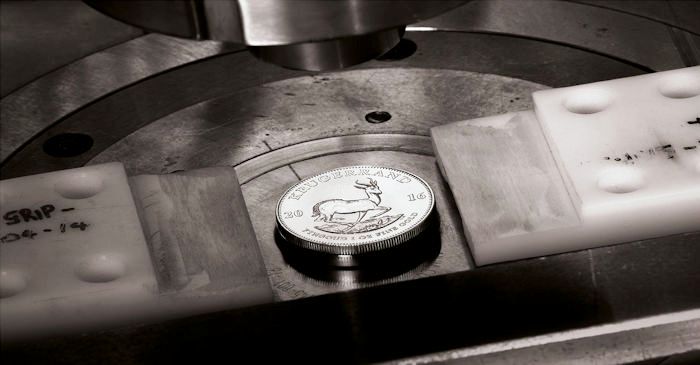 A recent Saturday Night Live (SNL) skit has indirectly called good-natured attention to Chris Costello, who has designed the reverse of the 2014 America the Beautiful Quarters, the silver obverse of the 2016 Mark Twain gold commemorative coins, and the reverse for the 2016 National Park Service 100th Anniversary commemorative silver coins for the U.S. Mint, among several others. What many coin collectors don’t know is that—at only 23 years of age—Chris Costello created the Papyrus font. He was paid the princely sum of $750 and Papyrus has since made it into Microsoft’s standard selection of fonts.

In the now-viral SNL skit, actor Ryan Gosling bemoans the usage of Papyrus in the title of the 2009 film Avatar. Papyrus is a Microsoft system font, like Comic Sans, Arial, and others whose ubiquity has made them the butt of many Internet jokes. In 2009, YouTube channel CollegeHumor broke the Internet with a skit called “Font Fight,” in which the personified Apple and Microsoft system fonts have a tongue-in-cheek gang war. (Only Comic Sans survives.)

CBS interviewed Costello for his thoughts on the SNL skit; the Artistic Infusion Program designer said it was “one of the best things [he’d] seen.” Back in April of this year—well before the skit rolled out—Costello was asked in an interview what he thought was the “craziest” place in which his beloved font was used. His response, ironically, was:

It had to be when I saw Avatar. I was just sitting there and then all of a sudden the alien language was subtitled in Papyrus. The kerning was off, the letters were spread apart too far, and of course, I was critiquing the whole thing. That lit up the whole blogosphere because people love it or hate it. The title of the movie is a derivative of Papyrus, too.

Internet memes aside, typography in general is a serious business. Badly designed typefaces, and inappropriate use of well-designed typefaces, can result in unreadable text. One example is the blunder caused by the change of font on interstate highway signs. Initially, studies indicated that Clearview font would improve the legibility of interstate signs, which at the time used Highway Gothic font. However, more recent studies shed light on the real factor improving legibility: novelty. Yes, the primary reason that the new Clearview highway signs were more legible was that they were new, and not the fading relics of the 1940s they replaced. In more recent tests, Highway Gothic signs easily beat out Clearview for clarity. The U.S. Federal Highway Administration (FHA) announced in 2016 that they would begin phasing out all Clearview signs and restoring the Highway Gothic font. The FHA pointed out that Clearview wasn’t hazardous; it was just less clear. In contrast, NOAA’s National Weather Service’s use of all-caps in its weather alerts has been deemed potentially dangerous. The wall of similar-looking letters is so hard to read, the bulletins are often ignored—at the reader’s potential peril. NOAA plans to begin using normal sentence-style caps for its weather alerts, leaving all-caps for only the most urgent warnings. 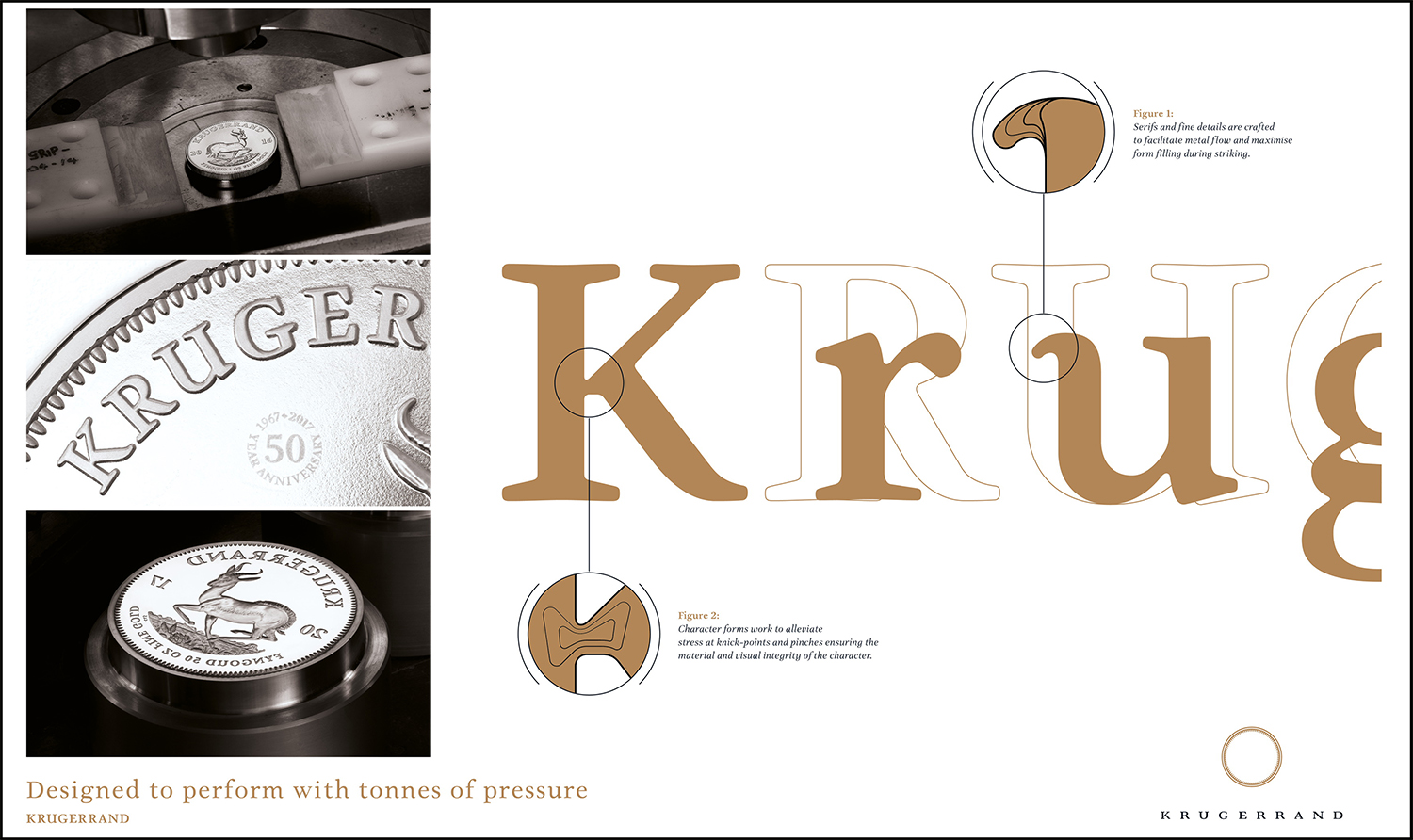 In the medallic arts, additional considerations come into play. The type must convey both the necessary information and the mood of the design, all while being readable at a very tiny size. (For a raft of examples, check out the Twitter hashtag #FontsOnCoins.) In contrast to the Papyrus font blunder in Avatar, the South African Mint announced in August that the font on its silver Krugerrand had won a Craft Award for typography in the Loeries, a renowned series that awards excellence in the communications industry in Africa and the Middle East. 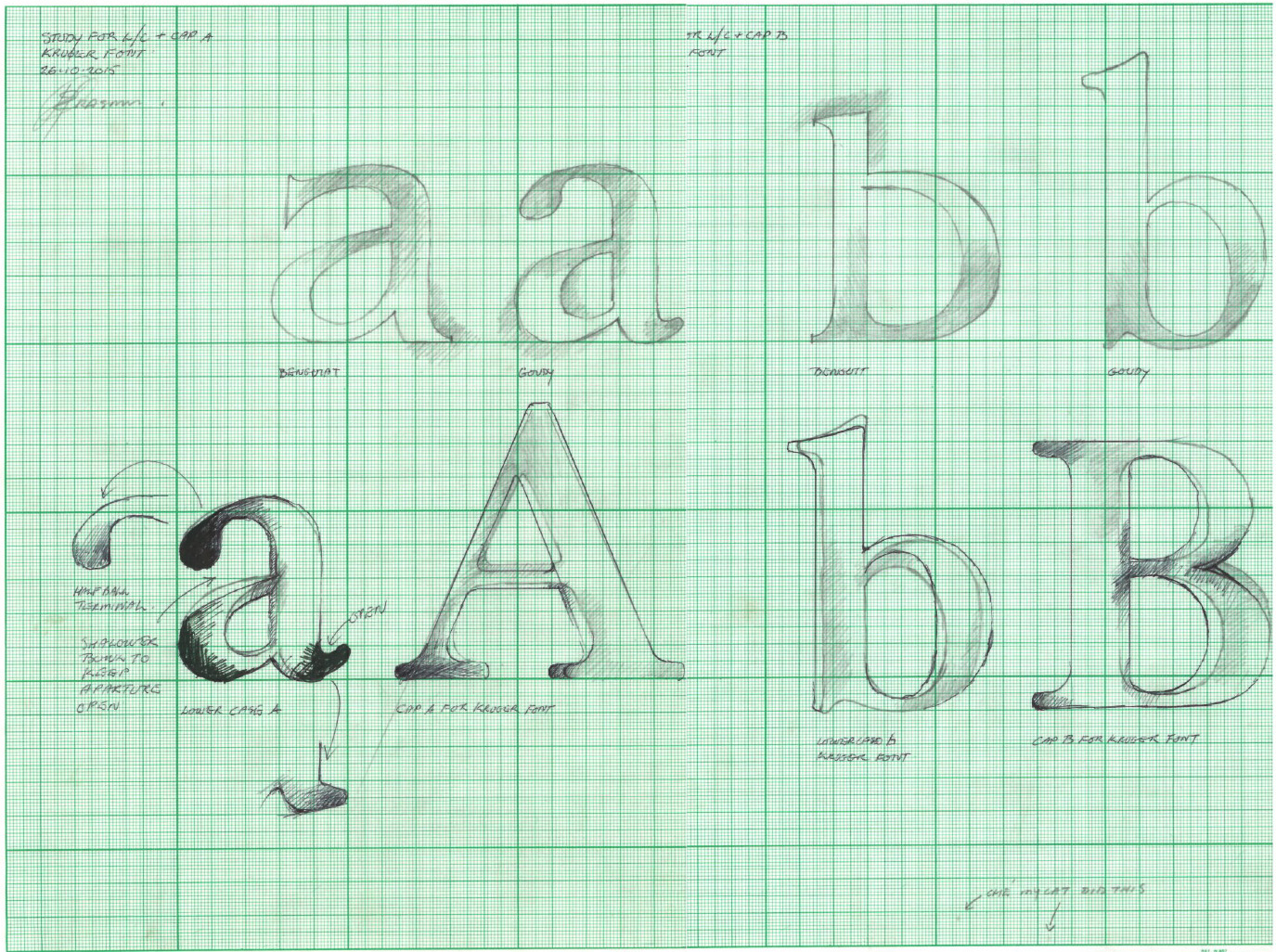 The mint had asked Jan Erasmus, one of the top designers in South Africa, to create a font family for the 50th anniversary of the Krugerrand, the world’s first bullion coin. The new font would be used not only on the coins but on the related marketing materials. Erasmus opted to recut the Krugerrand’s original font, a classic known as “Goudy Old Style.” The result was a medium-contrast set of characters, with soft corners and straight edges for a crisper appearance:

The original and updated typefaces, compared. (Hover to zoom)

The apertures (for example, the hollows within the letters “b” and “d”) are more open, to prevent their being filled in by the flow of metal during striking. Pains were taken to ensure the new font could be struck into a planchet at a minuscule 3-point size under 150 tons of pressure: 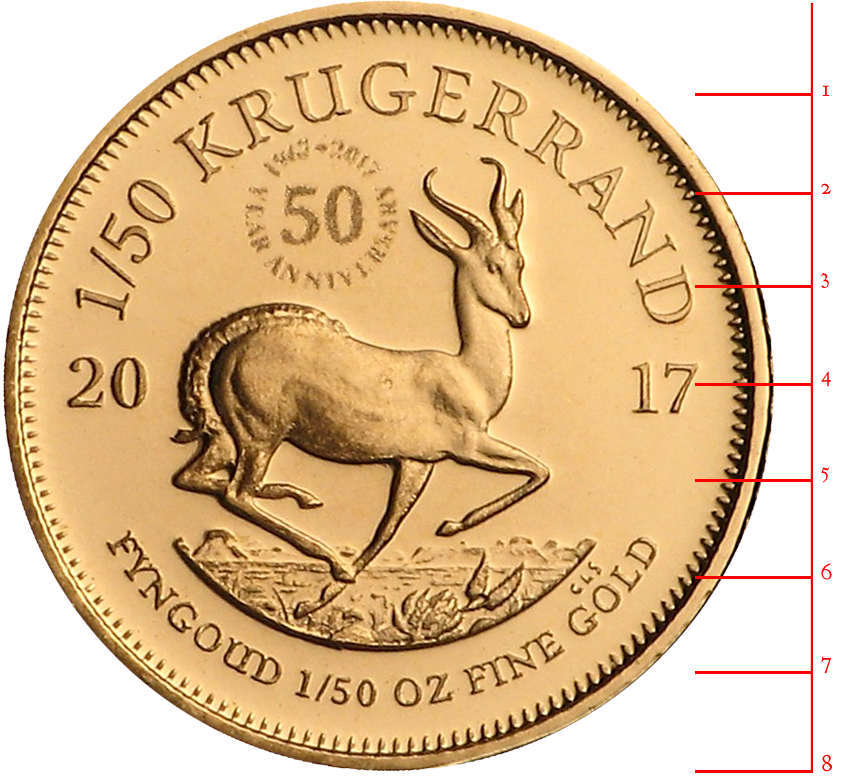 2017 is the first-ever year of the 1/50-ounce gold Krugerrand. Note the type at the bottom of the coin; for perspective, the red ruler shows the coin’s actual diameter: 8 millimeters.

Erasmus’s attention to detail, consideration for the collector, and creativity not only produced a successful font — which is now seen on millions of 50th-anniversary Krugerrand coins around the world — but earned the South African Mint a well-deserved Craft Award and heaps of praise.