Viewers of Coingrader Capsule know we test modern holdering companies, especially against the widely held half-truth / half-myth that early graders were more conservative than those of today. You can view several posts about that in Coin Update.

In the end, the earlier graders may have been stricter more often than not, but also more inconsistent than top-notch graders for PCGS and NGC.

So I decided to crack out and test these quarter dollars, all toned in various degrees and housed in early ANACS holders. These were among the first holdered by the oldest grading company. At first, ANACS issued certificates and grades beginning in 1979, and by 1988 developed these sealed holders with the word “ANACS” in faded blue on white labels.

Here are the coins as depicted in a recent Capitol Coin auction alongside the PCGS TrueView photo next to it. The 1945 quarter was won with a bid of $45, or $51.75 realized price with 15% buyer’s premium. PCGS also graded this coin MS-66, worth $80, a small profit of about $30. The toning should bring about $80 when offered on eBay through one of my favorite sellers. (Hover cursor over images to zoom.) 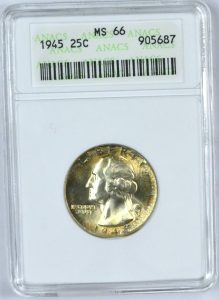 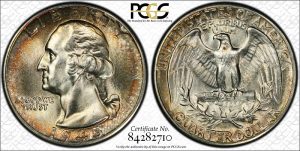 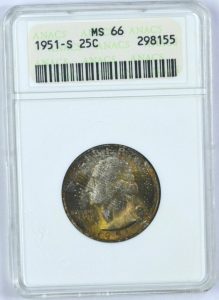 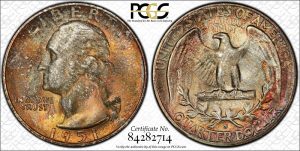 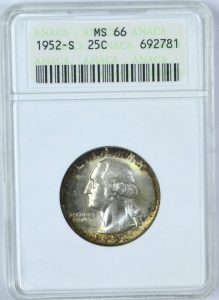 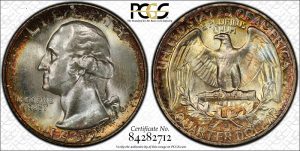 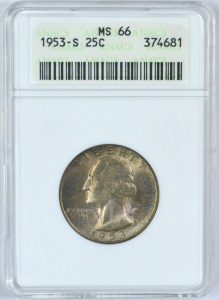 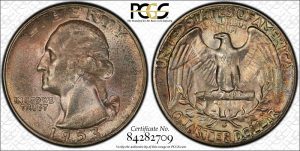 The next coin, 1954, was graded MS-67 by ANACS. I won it for $112 with buyer’s premium. If it graded at that level by PCGS, the coin could be sold for hundreds, especially because of the toning. Alas, it graded MS-66, worth about $36 retail. I anticipate about $75 because of the spectacular toning. (By the way, I disagree with PCGS; this looks MS-67 to me, with a super-strong strike.) 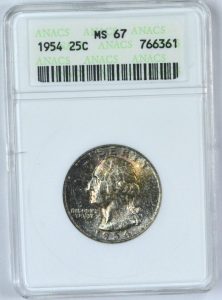 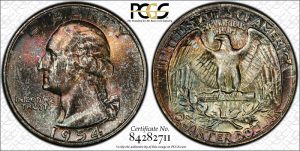 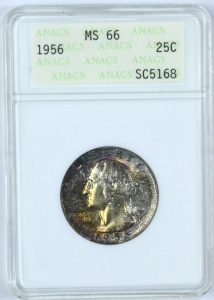 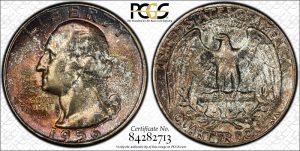 So in the end, four of the six coins were graded lower by PCGS. (I agree with three of the lower grades.) The point being, once again, that early graders—and ANACS graders were among the earliest—were good, but they were actually more generous in grades than the top graders today.

What does this mean? Bid cautiously on early ANACS coins. Rely on your grading acumen rather than the age of the holder.

What do you think about early ANACS coins? Any experience cracking them out and sending them in to PCGS?   ❑