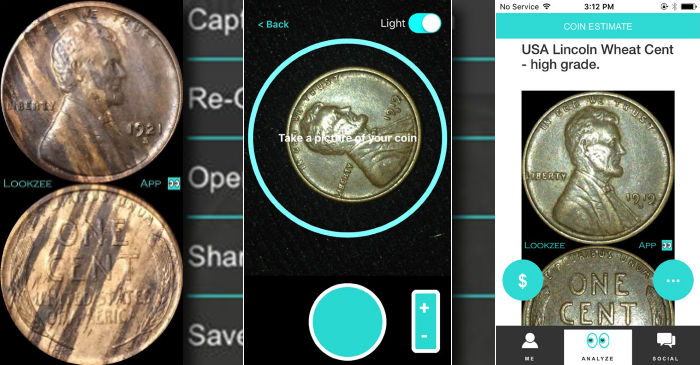 Yesterday, the coin-collecting hobby got an update for the next generation: Lookzee. The app takes advantage of an iPhone’s camera to take an image of a collector’s coin, which is then cross-referenced against a database built from thousands of coins sorted by Tim Rathjen’s revolutionary “Machine.” After analyzing the collector’s coin, Lookzee provides its denomination, type, and year of issue. The app also provides a broad estimate of the coin’s worth as well. A video of the app in action is available on Lookzee’s official Facebook page, and while the only version available at the moment is for the iPhone, a version for Android is set to be released shortly as well.

What does this mean for the hobby of coin collecting? Well, access to numismatic grading in the form of an app can present this traditional hobby in a form that is more palatable to the next generation of collectors, potentially creating an infusion of renewed interest in the field. Furthermore, machine grading, in general, is becoming an increasingly more salient concept, given the possibility that machines will likely be more accurate in identifying the finer details of coins than humans in the near future. Apps like Lookzee could one day protect collectors from counterfeiters, especially more novice collectors who are not as well-versed in the field. However, the best form of protection from counterfeiters at present is still amassing a broad knowledge of coins — particularly a level of knowledge that is greater than the counterfeiter’s.

When I discussed this breakthrough in technology with CCAC member Dennis Tucker, he mentioned, “An app like Lookzee will be particularly helpful to collectors in the United States who wish to know more about coins that are foreign or come with inscriptions that are not in English.” Given my interest in Mexican coinage, I can personally relate to these concerns. On the flip side, collectors who do not speak English would be able to take a greater interest in coins minted in the United States thanks to apps like Lookzee, which could function as a numismatic translator of sorts.


Additionally, Tucker and I discussed how this technology might one day combat the increasingly convincing counterfeit coins that are entering the market. Perhaps in the future, a collector could place a coin on their phone to weigh it and check its diameter. In fact, “near-infrared spectroscopy,” which allows a device with a lens to detect an item’s molecular composition without actually touching it, is making its way into smartphones. At least one private bullion producer (PAMP) has begun scanning the unique surface patterns of their bullion bars and storing the results in a database. Customers with the proper smartphone app can photograph the bar, along with the packaging’s QR code, to check for authenticity. (The Royal Australian Mint has recently added this feature to its gold Kangaroo bullion coins.) The incorporation of all these various features into a single app could deliver a serious blow to the counterfeiting business — anybody could detect fake coins simply by using a smartphone. However, the more counterfeiters learn about detection methods, the more complex their methods of forgery become as well, so, for the moment, the intense arms race between buyers and counterfeiters trudges on.