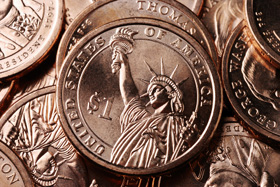 Following the two separate bills introduced last week, a third bill has been introduced in Congress which attempts to deal with the issue of the growing hoard of $1 coins held by Federal Reserve Banks.

Under current law, Reserve Banks are required to make each release of the Presidential $1 Coin Program available to financial institutions during an introductory period. This compels the Reserve Banks to order large quantities from the United States Mint despite little transactional demand. The situation has led to a hoard of 1.252 billion coins in storage that is projected to reach 2 billion by 2016.

H.R. 2635 ‘Cutting Out Inefficient and Needless Spending Act of 2011’ or the ‘COINS Act of 2011’ was introduced on July 25, 2011 by Rep. Jared Polis of Colorado. There are two cosponsors to the bill, which has been referred to the House Committee on Financial Services.

The bill would modify Section 5112(n)(8) of title 31, United States Code by adding “The Secretary shall suspend issuance of coins under this subsection during any period for which the Secretary determines that the surplus supply of $1 coins exceeds the reasonable circulation needs for one year.” Additionally, the bill would remove the requirement for the Federal Reserve Banks to ensure that unmixed quantities of each design of the Presidential $1 Coin Program are available to depository institutions.

If the bill becomes law, collectors would likely be faced with an immediate and prolonged suspension in the Presidential $1 Coin series. During the last four quarters for which full information is available, the net number of $1 coins issued for circulation by Federal Reserve Banks was 88 million. This is calculated based on the difference between the Reserve Bank payments to circulation and the receipts from circulation. In actuality, the total demand from circulation during a suspension of the program may be even lower, as part of the demand is likely generated by the issuance of four different designs per year. Thus, it seems possible that a suspension could last as long as ten or twenty years while the surplus supply of $1 coins is used up.

The situation does have some recent precedent. During 1979 and 1980, the United States Mint struck around 847.5 million Susan B. Anthony Dollars for circulation. After it became apparent that the coins were not circulating to any wide extent, in 1981 the coins were minted in the minimal quantity necessary for the annual uncirculated coin sets produced for collectors. For the following 18 years, the coins were not produced in any format. In 1999 after the surplus of coins had finally been worked off, around 37 million 1999-dated Susan B. Anthony Dollars were produced for circulation. This represented the longest gap between two dates in the same series in the history of U.S. coinage.

A prolonged gap in the Presidential $1 Coin Program would be even more vexing, as the series was created to feature rotating designs. Rather than being released in approximately equal intervals, sequential Presidents could be released years or decades apart.

If the bill becomes law, it would also have an impact on the First Spouse Gold Coin Program. These one-half ounce 24 karat gold coins are required to be issued “on the same schedule as the $1 coin issued under subsection (n) with respect to each such President.” Thus, any gap in the Presidential $1 Coin Program would be mirrored in the First Spouse series.

All three of the bills that have been introduced by Congress to deal with the growing $1 coin hoard have focused on eliminating or suspending the Presidential $1 Coin Program. None have directly sought to modify, suspend, or eliminate the Native American $1 Coin Program, and none have addressed the implications for the First Spouse Gold Coin Program. Most notably, none of the bills have sought to directly address what is generally perceived to be the primary reason for the non-circulation of the $1 coin and the resulting growing hoard of coins in storage– the continued production of the $1 banknote.