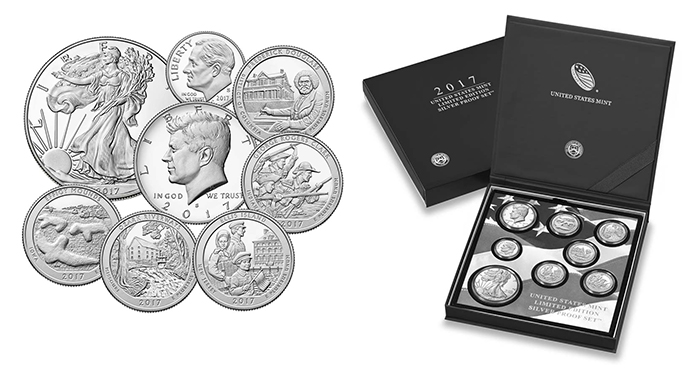 Today (October 5) at noon Eastern time, the 2017 Limited Edition Silver Proof Set (product code 17RC), will be available for purchase. Priced at $139.95, the product is attracting unusual attention because of its American Silver Eagle Proof coin, which this year is from the San Francisco Mint instead of West Point. The coins are available from the Mint in the 2017 Congratulations Sets (an instant sell-out their day of release on April 4) and the Limited Edition Silver Proof Set. (The 2017 Proof ASE that is available for individual purchase is the usual West Point strike.)

With the second-lowest mintage (less than 125,000) among all regular ASE Proofs, the 2017-S has established itself as a key to the series even before the last 50,000 have been offered for sale. The 2017 Congratulations Sets have been going for around $125 on ebay, with graded coins getting considerably more.

The Mint has set a household order limit of 2 for the 2017 Limited Edition Silver Proof Set, which contains: