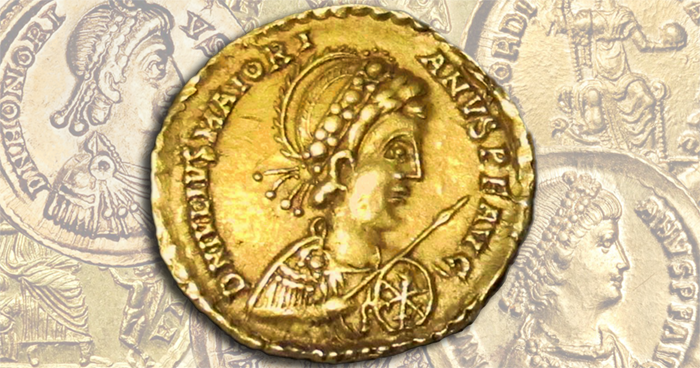 Forty-one Roman gold solidi, similar to these, were found in an orchard in the Netherlands. At center is a solidus of Majorian; the presence of coins from his reign suggests the coins were buried around 460 AD.

The Dutch website de Volksrant reports (in a June 2 article by Geertje Dekkers) on the disclosure of a 41-piece gold hoard unearthed in an orchard in Gelderland. Based on certain of the gold solidi—those from the brief rule of Majorian (457–461)—experts believe the coins were buried around 460 AD. At that time, the Netherlands region was in the western part of the Roman Empire, which was in its final days. Lacking its former might, the empire engaged the locals in the far reaches of its territory to defend against invaders; in the case of the Netherlands, the Romans likely paid a Frankish warlord to fight the Visigoths.

Nico Roymans, an archaeology professor at the Vrije Universiteit in Amsterdam, points out that human remains dating from around 1800 BC have been located in the area, and that a 19th-century map shows the existence of a hill—likely a burial mound—that was probably leveled around 1840 for farmland. Individual gold coins have been found in the area over the years, but nothing like the hoard of 41 gold solidi. According to Roymans, the combined evidence suggests the original owner of the gold concealed it near an ancient burial mound in the hope that the special powers surrounding the place would protect the coins until his return.

The coins are now on display at the Museum Valkhof in Nijmegen, the Netherlands.

For the complete story, see the website of de Volksrant (which is in Dutch). A related English-language story can be found on the Archaeology News Network blog.   ❑