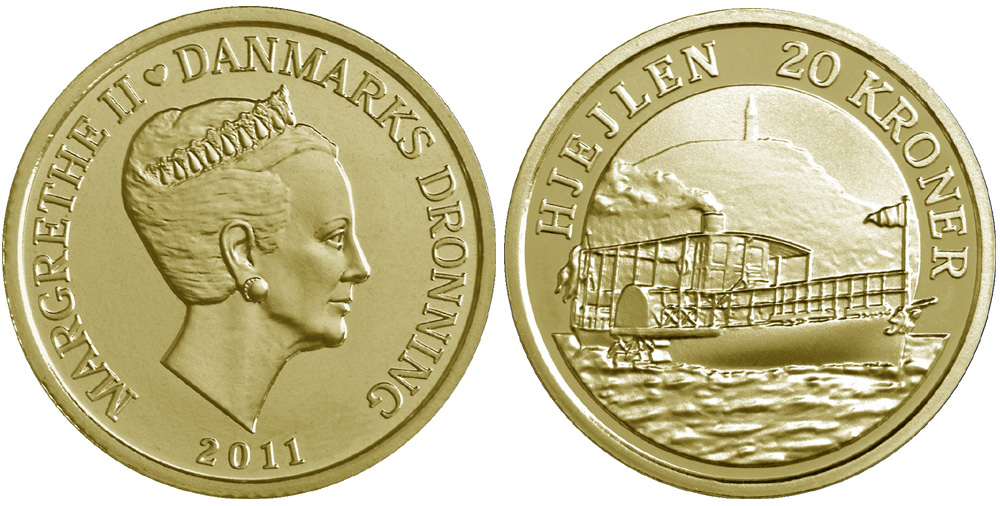 The Danmarks Nationalbank will issue (8th June) a new 20 kroner coin featuring the paddle steamer “Hjejlen”. This is the 10th coin in the popular “ships” collector series which began in April 2007.

The Hjejlen is now the world’s oldest paddle steamer which is still in operation. It was built in Copenhagen in 1861 and this year also marks its 150th anniversary. The original idea for the construction of the Hjejlen was that it was hoped the paddle steamer would stimulate tourism to Himmelbjerget, where the unusual ship was moored.

The coin has been designed by the Royal Danish Mint’s medallist Henrik Wiberg, who also designed the ship coin depicting the royal yacht Dannebrog in 2009. The obverse side of the coin carries the latest portrait of Queen Margrethe II, which was introduced in 2010 in conjunction with the Queen’s 70th birthday coinage.

The Hjejlen 20 kroner coin will have a total mintage of 700,000 pieces, which will be placed into circulation. It is of the same size and alloy as the ordinary circulating 20 kroner coin. A proof quality collector’s edition will also be available directly from the Mint. It is expected that the next coin in this series will be issued in the spring of 2012.

For more information on this coin, the Ship series and other thematic coins currently available from the Royal Danish Mint, please visit their comprehensive website at: www.royalmint.dk.