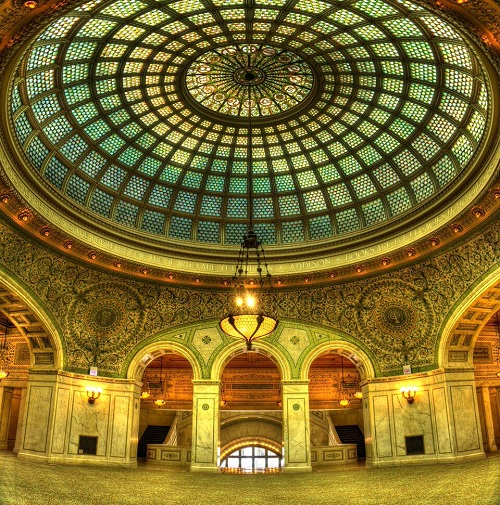 HJB Ltd. has issued the following press release on a new annual coin show set up to benefit its History in Your Hands Foundation, a nonprofit organization established to promote numismatics. The first show will take place at the Chicago Cultural Center, April 5-8 in 2017.

Harlan J. Berk, the founder of HJB Ltd., has for decades made it his object to share his enthusiasm for numismatics with others. So the goals of his recently established “History in your Hands Foundation” were easy to specify. As Shanna Berk-Schmidt explained, “All profits from our new coin show at the Chicago Cultural Center will be credited solely to the ‘History in your Hands Foundation’. That money will be used to communicate to others how incredibly diverse and fascinating numismatics can be. We plan to organize and finance programs that will show young and older people alike just how much history can be represented by a single coin that you hold in your hand. We intend to bring the study of coins back into schools, beginning of course in Chicago. But we hope that eventually the foundation will help to popularize numismatics right across America, and even internationally. We expect to cooperate with other organizations too, in order to put the profits from the coin show to the best possible use for the numismatic community.”

Coin dealers and collectors who would like to support the “History in your Hands Foundation” should mark the dates 5-8 April 2017 in their calendars, when the new coin show in the Chicago Cultural Center that HJB Ltd. is organizing will be held for the first time. The Cultural Center occupies an impressive location in downtown Chicago, just across Michigan Avenue from Millennium Park and only a five-minute walk from the Art Institute of Chicago. So the new show will fulfill a wish that many dealers and collectors have expressed in recent years, namely that coin show should be reestablished in downtown Chicago. Dealers and collectors may also expect the new show to be convenient and enjoyable in every way. As Aaron Berk stated, “I have been visiting coin shows for as long as I can remember, so know exactly what I need and expect when I attend one. Our new show will provide just what I myself would want as a table holder or visiting collector. As a long-established Chicago firm we feel obligated to present a well-organized and enjoyable show.”

Harlan J. Berk commented that his daughter Shanna Berk-Schmidt has long wanted to bring a coin show back to downtown Chicago, where it could be appreciated not only by collectors, but by the public at large. “You couldn’t find a more prominent location for a coin show in Chicago than the Chicago Cultural Center”, Berk said. “Thousands of people will walk past our posters and hopefully begin to appreciate what a wonderful hobby coin collecting is. I am very proud that my children are carrying on what has always been one of my own goals, to pass on my passion for numismatics to other people”.

It is already possible to reserve a table at the new coin show in the Chicago Cultural Center, to be held 5-8 April 2017, thereby supporting the “History in your Hands Foundation”: please contact Shanna Berk-Schmidt at e-mail , tel. 312-609-0026. Because all profits from the show will be paid to a not-for-profit organization, some participants may be entitled to a tax reduction, so reducing their own outlay while simultaneously supporting the foundation.