The Royal Mint has announced (18th February) that the production of the gold sovereign coin will once again commence in India. Not since 1918 has the British gold coin been produced in India for use or sale to the local populace. With this significant development, revealed today in New Delhi, the gold-buying consumer in India will easily be able to purchase genuine versions of the Sovereign, one of the world’s most famous coins and a lasting symbol of beauty, reliability and integrity.

These commemorative Sovereigns, struck in India by MMTC-PAMP using tools and techniques developed by The Royal Mint in South Wales, UK, will be uniquely available to the Indian market. In partnership with MMTC-PAMP India Pvt. Ltd. a joint venture between PAMP SA, Switzerland, MMTC Limited, and a Government of India Undertaking, established in 1977, PAMP MMTC Limited is India’s largest public sector trading organization, engaged in trading of several products including precious metals. They are India’s single largest bullion trader.

Upon being advised of this new Royal Mint development, Prime Minister David Cameron commented “It is great to see gold Sovereign coins being introduced back into India for the first time in almost 100 years. This will no doubt be a boost for The Royal Mint as they re-enter the largest gold market in the world.” 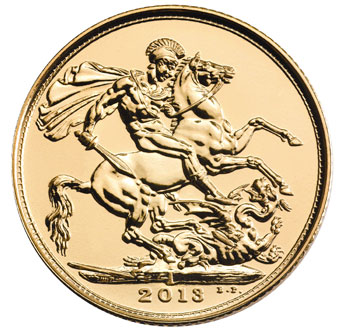 The production of Sovereigns in India by MMTC-PAMP under license, it is expected that the sales value in India in the third year is estimated to reach £125 Million pounds with The Royal Mint receiving a license payment for every Sovereign struck in India, contributing to the dividend that The Royal Mint pays every year to its sole shareholder, the UK Treasury.

Of interest to collectors as well as investors alike, all Sovereigns struck in the MMTC-PAMP facility will be done so using original tools and dies made in The Royal Mint’s site in South Wales, UK. These tools will either be returned to South Wales when worn out or rendered unfit for further production, or be physically defaced in India by the Royal Mint technical personnel, with adequate documented evidence of the defacing, ensuring that they cannot be re-used for any other means than the production of genuine commemorative  Sovereigns. Another aspect of this first issue is since the Sovereign does not constitute legal tender in India in terms of the Indian Coinage Act; – it is considered a commemorative gold coin, but with no actual face value, and its trade is based on the value of its gold content and its authenticity.

Gold plays a significant role in Indian society for such occasions as engagements, weddings, birthdays and religious events. The gift-giving of gold is traditionally in the form of gold coins. In 1918 the sovereign was minted in India and was the dominant coin for such events.

The commemorative Sovereign will be packaged by MMTC-PAMP in a distinctive sealed packaging which will not only carry The Royal Mint certification of gold content and purity but also will be individually serial numbered, thus providing distinctive features to the Indian public in line with gold coins currently distributed in India. This is a special feature MMTC-PAMP provides and sets apart the Sovereign in India from the sovereign traditionally supplied in loose form by The Royal Mint elsewhere. The coin will be distributed through an elaborate network of wholesale bullion merchants, companies who have an all-India distribution network for their products and select jewellers & banks with which MMTC-PAMP has existing relationships.