The Newlin-Davis-Perschke specimen 1787 Brasher Doubloon will be offered by Heritage Auctions at the 2014 Florida United Numismatists Convention in Orlando. The rare American gold coin has been seen in public relatively few times since Chicago coin dealer Walter Perschke purchased it in 1979 for a then-record $430,000. It is graded NGC MS  63 with CAC grade approval and is described as the finest certified of the seven known Brasher Doubloons.

“It will be offered without reserve during our Platinum Night auction session on January 8, 2014.  We expect it will bring $5 million or more and set a new record as the most valuable early American gold coin — and third most valuable of any U.S. coin — ever sold at auction,” said Jim Halperin, Co-Chairman of Heritage Auctions. 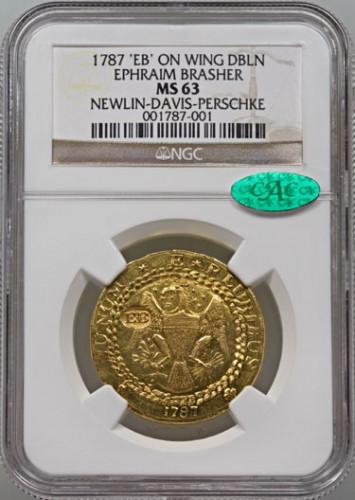 Brasher was a well-known silver and goldsmith in New York City at the time the coins was made, and became a neighbor of George Washington on Cherry Street in lower Manhattan.

”The Brasher Doubloons were the only colonial gold coinage issues produced with intent for circulation, and therefore, must be considered among the most important of all colonial coinage.  A case can certainly be made that these are the most important American coins, bar none,” said Halperin.

Two of the seven known Brasher Doubloons are in museums: one in the Smithsonian’s National Numismatic Collection, the other in the holdings of the American Numismatic Society.

Previous owners of the Newlin-Davis-Perschke specimen include the Gilmor family of Baltimore; Harold P. Newlin; Robert Coulton Davis; John G. Mills; James Ten Eyck; Virgil Brand; Robert Friedberg (who displayed it through his coin and stamp concession at Gimbel’s Department Store at the 1964 World’s Fair in New York); and RARCOA which sold the coin to Perschke at Auction ’79 in St. Louis.

“It’s been an exciting adventure!” said Perschke recalling the media frenzy when he purchased the coin.  “Immediately after the auction, I was interviewed for the CBS Evening News With Walter Cronkite.”

A few weeks after its purchase, Perschke took the Brasher Doubloon to Maryland for a videotaping of the popular PBS television program, “Wall Street Week With Louis Rukeyser.”

The coin was displayed in 1987 as part of the national “Roads To Liberty” tour in celebration of the bicentennial of the United States Constitution, then exhibited for a year at Epcot Center at Disney World in 1988.  It then stayed in a Chicago area bank vault for 24 years.

Numismatic Guaranty Corporation certified the coin in 2012 and it was displayed by NGC at the ANA World’s Fair of Money in Philadelphia, its first public appearance in over two decades.

“The coin’s design is evocative of the spirit of the newly formed United States. The obverse mimics the Great Seal of the United States with an eagle holding an olive branch in one claw and arrows in the other. The olive branch symbolizes a desire for peace while the arrows indicate a readiness for war. Around the obverse is the motto, E PLURIBUS UNUM, which means ‘Out of Many, One’ — the 13 states form one country,” NGC noted at the time the coin was certified. 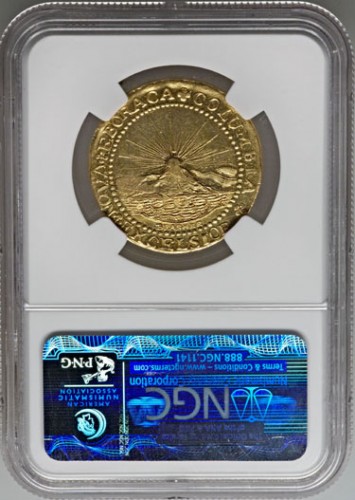 “On the coin’s reverse side a sun rises above a mountain in front of a sea, likely to signify a new beginning. Around the design is a Latin legend: NOVA EBORACA * COLUMBIA * EXCELSIOR.  Columbia was an old nickname for the United States, Nova Eboraca translates to New York, and Excelsior — Ever Higher — is the state’s motto.  Brasher signed his name prominently in the center of the design.”

Heritage Auctions is the largest auction house founded in the United States and the world’s third largest, with annual sales of more than $800 million, and 800,000+ online bidder members.  For more information about Heritage Auctions, and to join and receive access to a complete record of prices realized, with full-color, enlargeable photos of each lot, please visit www.HA.com.