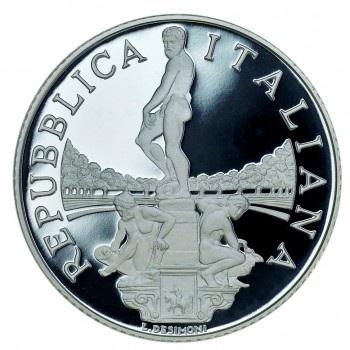 The Istituto Poligrafico e Zecca dello Stato (IZPS) has launched the latest coin in their always anticipated “Historical Villas and Gardens” series, which features some of Italy’s most well-known and historically significant villas and gardens. This year’s coin features the Giardino di Boboli Firenze, or the Boboli Gardens, located in the picturesque city of Florence.

The Boboli Gardens, which form part of the estate cultivated by the House of de Medici during the early part of the sixteenth century, are the main gardens behind the Renaissance-style Palazzo Pitti, situated on the south side of the River Arno. The Palazzo itself dates back to 1458. It was purchased by the de Medici’s in 1549 and became their official home, eventually housing the seat of the ruling families of the Grand Duchy of Tuscany. The Palazzo was the seat of government during the Napoleonic period (1804 – 1814), and was also the principal palace for King Victor Emanuel II when Italy became part of a united kingdom under the crown of Sardinia. In 1919, the palace and its immensely valuable contents were donated in perpetuity to the Italian people by King Victor Emanuel III.

The gardens were mostly laid out by Bartolomeo Ammanati for Eleonora di Toledo, the Duchess of Florence and wife of Cosimo I de Medici, the second Duke of Florence. The gardens, regarded as some of the most beautiful in Europe, blend both classical and renaissance styles, incorporating wide gravel avenues and elaborate statuary and sculptures.

The openness of the garden, with its expansive view of the city, was unconventional for its time. The gardens were very lavish even by the standards of mid-sixteenth century Tuscany, which is perhaps unusual as access was not granted to anyone outside the immediate de Medici family, nor was the garden used for entertaining by the de Medicis after its completion.

A more ornate feature of Boboli is the Fountain of the Ocean, which was added in 1576 and is the work of Giambologna, or Giovanni da Bologna. The fountain sits in the center of the Isolotto, a small island surrounded by water to the west of the gardens that comprises a standing statue of Neptune and four reclining river gods.

The gardens were expanded to their present 45,000 square meters in the seventeenth century, when an extraordinary amphitheatre was excavated in the hillside behind the palace. The fountain of Neptune, a great attraction of the gardens, was created in 1565 and includes Stoldo Lorenzi’s bronze of Neptune clutching his three-pronged trident. This fountain is considered the central point of Boboli Gardens. 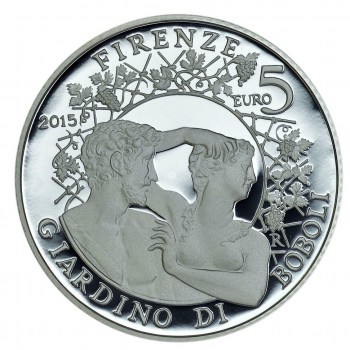 The coin, designed by Luciana de Simoni Bordo of the IPZS, includes a depiction of the Fountain of the Ocean on its obverse. The Amphitheatre gardens of Boboli are seen at the base of the sculpture. The name of the designer L. DE SIMONI is placed just under the sculpture and the inscription REPUBBLICA ITALIANA is placed around the primary design along the upper portion of the coin.

At the center of the reverse is a detail of the sculpture group Paris and Helen by Vincenzo de’ Rossi. In the background is a free interpretation of the decorations of the Grotta. Above the primary design is the text FIRENZE along with the year of issue, 2015, and the denomination, EURO 5. The text GIARDINO DI BOBOLI is placed below the design and around the lower portion of the coin. The mint mark R is positioned just to the upper right of the commemorative text.

This is the third coin in the popular series, “Historic Gardens and Villas.” The coin is now available and can be ordered direct from the IPZS. For more information on this and other coins offered by the Italian State Mint, please visit their Web site. Information is offered in Italian and English, with international orders dispatched where applicable.