The upcoming Künker Berlin sale, to be held on January 29, 2015, offers a myriad of highlights and the potential for some record prices. The sale starts with 258 spectacular showpieces from the Horn Collection, including a large series of Saxon rarities. Next in line are 238 lots of German coins from different possessions, every item of which is something special, too. The 76 world coins and medals come partly from the Horn Collection featuring a collection of Poland, a series of English guineas and a collection of early American gold dollars. The auction sale ends with 258 Russian coins, the crème de la crème, rarest of the rare.

It is rather difficult to single out individual pieces from this remarkable material, with so many items pushing themselves to the fore. To start with the Horn Collection, the combination of great rarity and magnificent grade has to be emphasized, being the characteristic feature of most items here. Take a case in point, the extremely rare speciesthaler from 1755, which Frederick II, the Great, had minted for trading purposes. Just 16 examples have survived. The one offered for sale is a splendid specimen, a first strike with tiny adjustment marks in about brilliant uncirculated (34, estimate: 40,000 euros). The gorgeous löser of 9 reichsthaler of Julius of Brunswick-Wolfenbüttel from 1574 not only is of utmost rarity but is likewise an extraordinarily attractive item due to its beautiful patina and the grade, very fine to extremely fine (41, estimate: 50,000 euros), just like the reichsthaler of Anna Salome of Salm-Reifferscheid, who had as Abbess of Essen this wonderful coin made in 1680. The extremely rare coin comes in about extremely fine and is unusually attractive with its marvelous patina (68, estimate: 20,000 euros).

And we have not even reached Saxony, the main collection field of Otto Horn who was living in the city of Meißen. All the “splendid specimens” and “showpieces” included here would make a collection of their own. Just look at the rare double thaler of Frederick August II on the death of his father August the Strong in 1733 with its superb patina and its perfect state of preservation (175, estimate: 10,000 euros) or the double konventionsthaler from 1780 of Frederick August III with a mintage of only 20 specimens, a first strike made with polished dies, that virtually anticipates what modern mints refer to as Proof (183, estimate: 20,000 euros). But there are also fantastic coins with a three-digit estimate. A simple vereinsthaler of John, King of Saxony 1854-1873, a first strike from 1861 with a marvelous patina in brilliant uncirculated is estimated at 500 euros only (192). 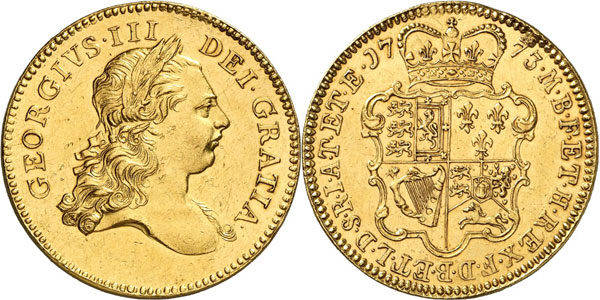 This takes us to series and collections worth mentioning. At present, Great Britain is a highly popular collection area, with mainly the heavy gold coins obtaining spiraling prices. This is why things will become exciting with the lots following #577, for there are not only one or two 5 guinea pieces hidden in the material from Great Britain but a considerable number. It all starts with Charles II 1668; next are James II 1688, William III and Mary 1692, William III sole 1701, George I 1726, as well as George II 1729 and 1746. What about the prices? Well, the cheapest piece is being estimated at 5,000 euros. Which is the most expensive one? The extremely rare pattern of a 5 guineas piece 1773 for George III, which was never released, offered in this auction for 100,000 euros.

Likewise pieces of greatest rarity are available from the Kingdom of Poland, like a half portugalöser of 5 ducats from 1622 (665, EF, estimate: 80,000 euros). Equally as rare, at least, is a double ducat of John Casimir, minted in Fraustadt in 1650 (670, EF, estimate: 60,000 euros). And these were just two items from the vast number of rarities on offer: 23 out of 49 pieces have an estimate in the five-digit region!

Compared to that, a small series of early gold coins from the United States of America is rather inexpensive, even though it is hard to think of coins that evoke more dreams than these.

You see, the gold 1, 5, 10 and 20 dollar pieces are testimonies to the different kinds of gold rushes: first, the gold rush of North Carolina in 1799 during which the gold was yielded that was used for producing gold dollars only since 1831, second, the gold rush of Georgia in 1828. The most famous ones of course are the coins from California.

A total of 1,078 lots with an estimate adding up to 6.5 million – these numbers really outline the auction sale. But only a careful examination of the catalog reveals the numerous interesting stories these coins and medals are telling. At the end of the day, a coin dealer does not just sell a piece of metal but the story it is linked to.