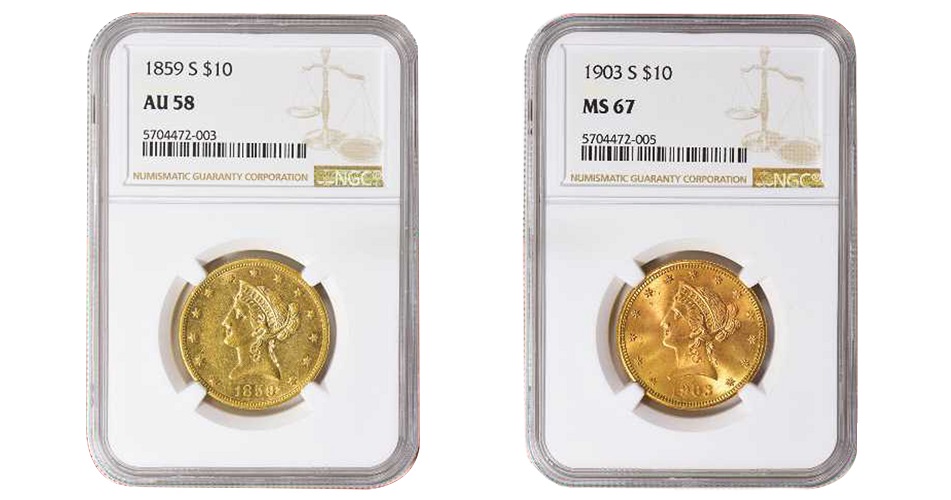 Increasingly difficult to find, these coins are an exciting opportunity for collectors.

Rare and high-grade Liberty Head eagles ($10) certified by Numismatic Guaranty Corporation (NGC) are featured in an upcoming GreatCollections sale. Offered without reserve, the coins can be bid on through Sunday, December 22, 2019.

The inherent value of a gold coin has made the Liberty Head $10 very desirable, both today and when they were issued from 1838 to 1907. However, only limited numbers were struck most years because half eagles were preferred in day-to-day commerce and the double eagles were used in bank transfers and international transactions.

It is extremely difficult to find high-grade examples of any date in the Liberty Head $10 series, and only a handful even approach the grade of NGC MS-65. The 1903-S with a grade of NGC MS-67 is especially well-preserved. The current bid is already up to nearly $4,000 16 days before the conclusion of the sale.

Particular dates and mint marks also increase the coin value. For example, the 1859-S generally sells for much more than its 1859 counterpart.

When the Coronet head design was replaced by the Indian head motif in 1907, the crowned Liberty’s reign ended. Now more than 100 years later, collectors have the chance to acquire an impressive example in this sale.

View the auction archive of 600,000 certified coins and currency sold by GreatCollections.