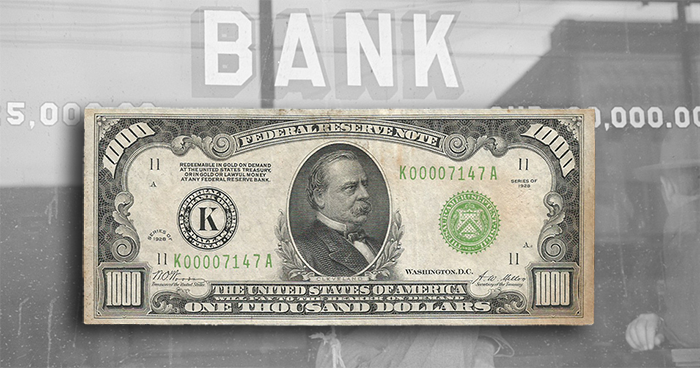 From a financial standpoint numismatics can be very rewarding, with many items increasing in value over time, providing a tangible benefit to this exciting hobby. Such increases in value, however, should not always be expected, and in some cases it may not be the best idea to put some items away at their time of issue in hopes of an increase of value and future riches. We will illustrate this with an American banknote that recently crossed our paths, a 1928 $1,000 Federal Reserve Note from the Dallas district in pleasing circulated condition.

High-denomination banknotes have captured the imagination of the American public ever since they were first issued. While such notes were occasionally issued during the large-size era (1862 to 1928), it was only with the introduction of small-size banknotes in the late 1920s that denominations of $500, $1,000, $5,000, and $10,000 were printed regularly. Mostly used for business and banking transactions, these high-denomination issues were rarely seen by the general public, but they were certainly available from banks. Until the last $500 and $1,000 notes came off the press in 1945 (they were officially discontinued in 1969 but can still be exchanged at any bank), large quantities of those two denominations, as well as smaller quantities of the $5,000 and $10,000 Federal Reserve Notes, were regularly printed.

The $500 and $1,000 notes were printed in various series (1928, 1934, and 1934A are known of both denominations, while small quantities of a series 1934B were printed but are unknown to exist); they are not very difficult to find, with certain Federal Reserve districts scarce to rare but both denominations generally available with relative ease in circulated condition. The banknotes are very popular regardless of condition, as many people (in particular people who gamble, it seems) like to show off a $500 or $1,000 note that they carry in their wallet for that exact purpose. Since the notes can be exchanged for their face value (as can virtually all U.S. paper money), they will never sell for less than $500 and $1,000, respectively, and always carry a small premium—but one can certainly find both issues in well-circulated condition for about 30% over face value.


Now let’s take a look at the banknote that recently crossed our paths. This series of 1928 $1,000 note bears the seal of the Dallas district, which is one of the scarcer districts of this series, with 42,960 notes printed. It is in relatively decent condition, with some staining on both sides, but no tears, pinholes, or very heavy folds. I would probably grade it Extremely Fine before the staining, which does hurt the grade a little bit, so an apparent EF, net VF seems to be the correct grade. Looking at what other examples of this district have sold for in similar grades, it seems that most pieces in this condition sell for about $1,800 to $2,200, with some sales lower and some sales higher, but for simplicity sake let’s give this note a value of $2,000. That’s certainly not bad, as it gives a net increase in value over face value of $1,000, so basically it is now worth double as a collectible than what it is worth in circulation.

There is, however, one factor that we should take into consideration, and that’s inflation. While $1,000 is nowhere as much money as it used to be, it still represents a decent amount of money, and when we go back almost 80 years to the time this particular piece was put into circulation, it surely must have represented a large amount of money. According to the website DollarTimes.com, which tracks the value of the dollar over time based on annual inflation rates, that $1,000 banknote had a value of  $13,955 (in 2017 dollars) when it was first issued. During the Great Depression that would have represented a lot of meals, rent, and other necessities at a time when average earnings for those who had jobs was less than $1,500 a year.

It is obvious that if you owned this particular banknote shortly after it was issued and held on to it in the hope that it would become worth more over time you did not do very well. Yes, it has increased in value in the past 80 years, but it has not kept up with inflation, and there would have been many investments that would have outperformed this particular banknote many times. This, however, is based on the fact that this $1,000 note is in circulated condition. Could you have done better if you’d picked up a freshly printed $1,000 note from the bank and kept it in perfect condition with no folds, stains, or pinholes? The answer is maybe. Depending on numerical grade, series, district, and seal color, a Gem Uncirculated (65 or better) $1,000 note shows recent auction results anywhere from the low $4,000s to as much $20,000. Star notes carry a strong premium (high-denomination star notes are extremely rare), as do certain varieties. In other words, luck would have played a large role in any potential profit, but chances are that even if you kept that $1,000 note perfect for 80 years it would still not make up for inflation.

Personally I’m of the opinion that this is still just a hobby, and while having a numismatic portfolio can certainly be financially rewarding, the enjoyment you get out of collecting that (at least for me) is worth more than any possible financial gain. As this particular banknote has shown, there are many factors that need to be taken into account to calculate the value of an investment over time—but honestly, as long as you have fun I think the financial aspect should only be seen as an added bonus.   ❑
Share: