The Long Beach Expo held this past week included a Heritage Auction with a wide variety of numismatic lots. In our preview article we discussed a number of these lots, and in this recap we will look at those lots that resulted in the highest results. Overall the sale realized prices that were in line with other recent results, which is a good sign for the overall health of the coin market. Please note that all prices mentioned include a buyers premium of 17.5%. 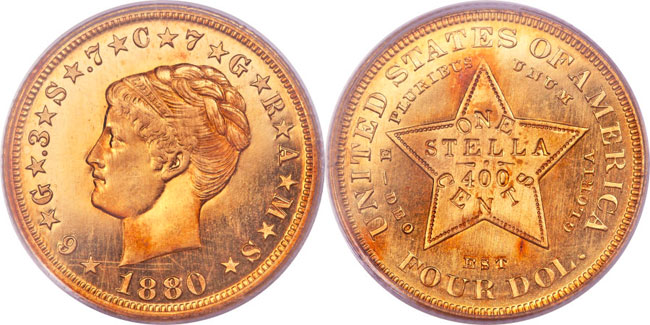 The first lot we will discuss was offered as lot 4230. It was the second 1880 Coiled Hair Stella or Four Dollar Gold Piece to come to the market this year, after an NGC PF-67 example was offered as part of Heritage’s Central States Auction in March. This, however, does not mean it is a common occurrence, as only nine examples of this particular coin are known to exist. The coin offered at the Long Beach Auction was graded PR65 by PCGS and stickered by CAC, with a pedigree that traces back to the famous Trompeter collection of Proof gold coins sold in 1992. It was last sold at auction in 1995, when it realized $308,000. That investment proved to be a wise one, as now, twenty years later the same coin (considered the third finest known) realized $1,116,250. 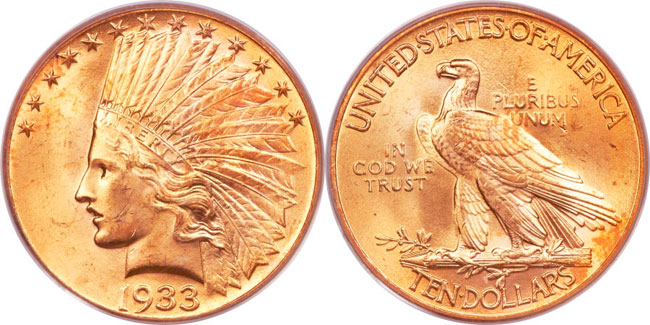 In our preview we discussed lot 4322, which realized the second highest price in the auction. 1933 would prove to be a year with major implications for American numismatics, as President Roosevelt recalled all gold coins from circulation as the United States went off the gold standard. As a result many gold coin issues from the 1920s and 1930s are very rare, as they were never released and most were melted. One such coin is the 1933 Eagle or Ten Dollar gold piece. The Heritage auction included one of the highest graded examples of this enigmatic issue, graded MS65 by PCGS that sold as lot 4322 for $587,500. While this might seem like a high price for any issue the price realized for this particular coin was actually a bit on the low side, perhaps the result of a few hits on the cheek that negatively impacted the coin’s eye-appeal. 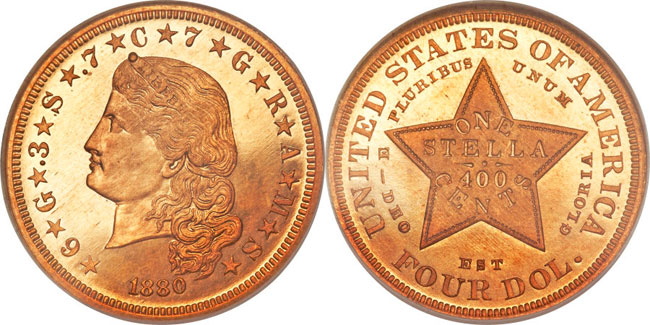 2015 is destined to be the year of the Stella, as the next lot is another example of this enigmatic issue. Lot 4229 is one of 19 examples known of the 1880 Flowing Hair Stella, graded PF65 by NGC and stickered by CAC. While not necessarily the finest known the rarity of this coin resulted in spirited bidding, and the coin realized $417,125. The third and final high-quality Stella that sold in the sale was the “common” 1879 Flowing Hair issue graded PF64* Cameo by NGC offered as lot 4228 realized $152,750. For completeness we mention another Stella that sold, lot 4227, a repaired VF 1879 Flowing Hair issue, which was perhaps a bargain at $44,650. 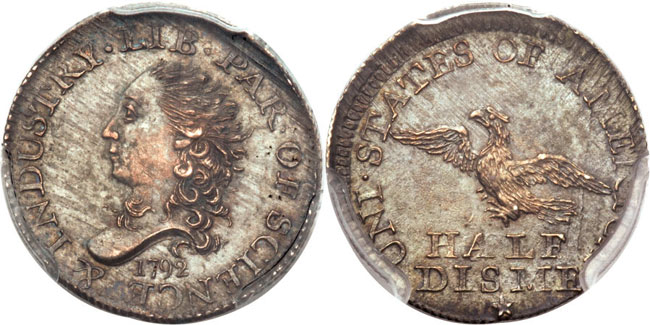 Of course it wasn’t all gold that glittered in the golden state. Lot 3839 was a very original PCGS MS64 graded example of the 1792 Half Disme, the earliest issue struck by the Federal Government, which realized $329,000, a price that can be considered to be in line with recent auction results. Of course, this was still down from the last sale of this particular coin, which was in March 2013, when it sold for $470,000. It’s a reminder that not every numismatic investment results in a profit, as we’re sometimes lead to believe in a strong market and prices keep on going up.

In our preview we discussed lot 4439, a rare 48.03-ounce gold ingot from the firm of Kellogg & Humbert, recovered from the wreck of S.S. Central America. A part of the California gold rush that might not be for every collector, the ingot saw spirited bidding, and it realized $164,500. This works out to approximately $3400 per troy ounce of gold, or approximately three times the current gold value, indicating that there certainly is collector interest in such items, and that it’s value is not just in the gold the ingot contains. 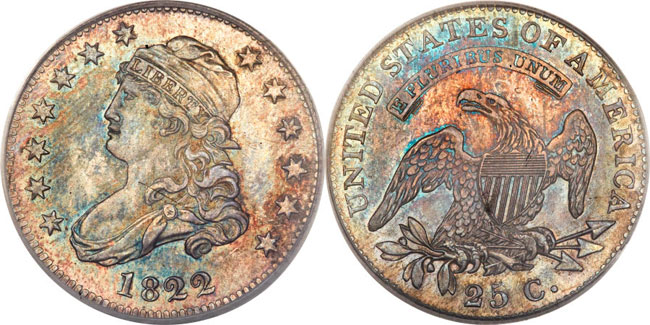 The Pogue collection of Early American coins, of which the first installment was sold recently, includes a large number of high-quality 18th and early 19th century coins, many of which are the finest known. But such coins also come from different sources, such as lot 3896, the single finest 1822 Capped Bust Quarter certified by PCGS. Graded MS67, the coin is a new example to the census, although the auction description indicates that its pedigree might be traced back to the 1950s. No matter where it came from the coin is a superb example of this issue and sold for $164,500, a very strong price, especially as the sale is only a few weeks after the Pogue PCGS MS65 example of this die variety (B-1) sold for $35,250.