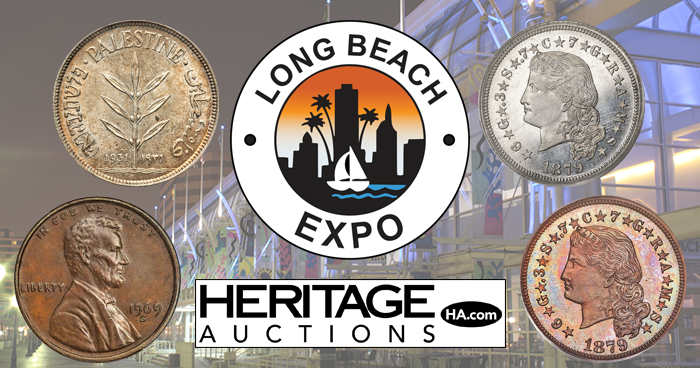 The first week of the September Heritage Auctions will include numerous auctions of U.S., ancient, and foreign coins along with paper money. This will be held in conjunction with the Long Beach Expo, held from September 7th through 9th in Long Beach, California. The last Long Beach show of the year (it is held three times each year, in February, June, and September at the Long Beach Convention Center), the auction offers a wide and diverse assortment of numismatic-related material. This preview will feature some highlights from the various auctions held during the week. Of course, this is only a very small selection of the items up on the auction block; all lots can be viewed on their website. 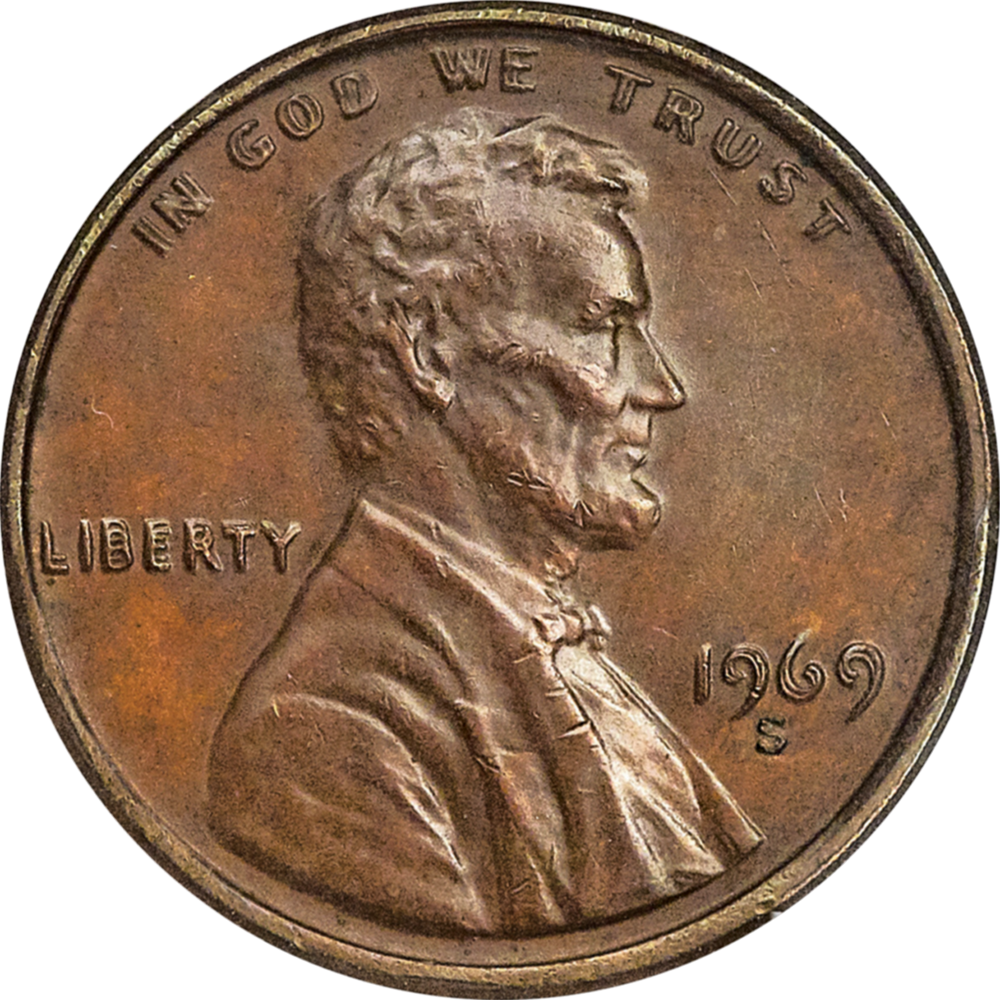 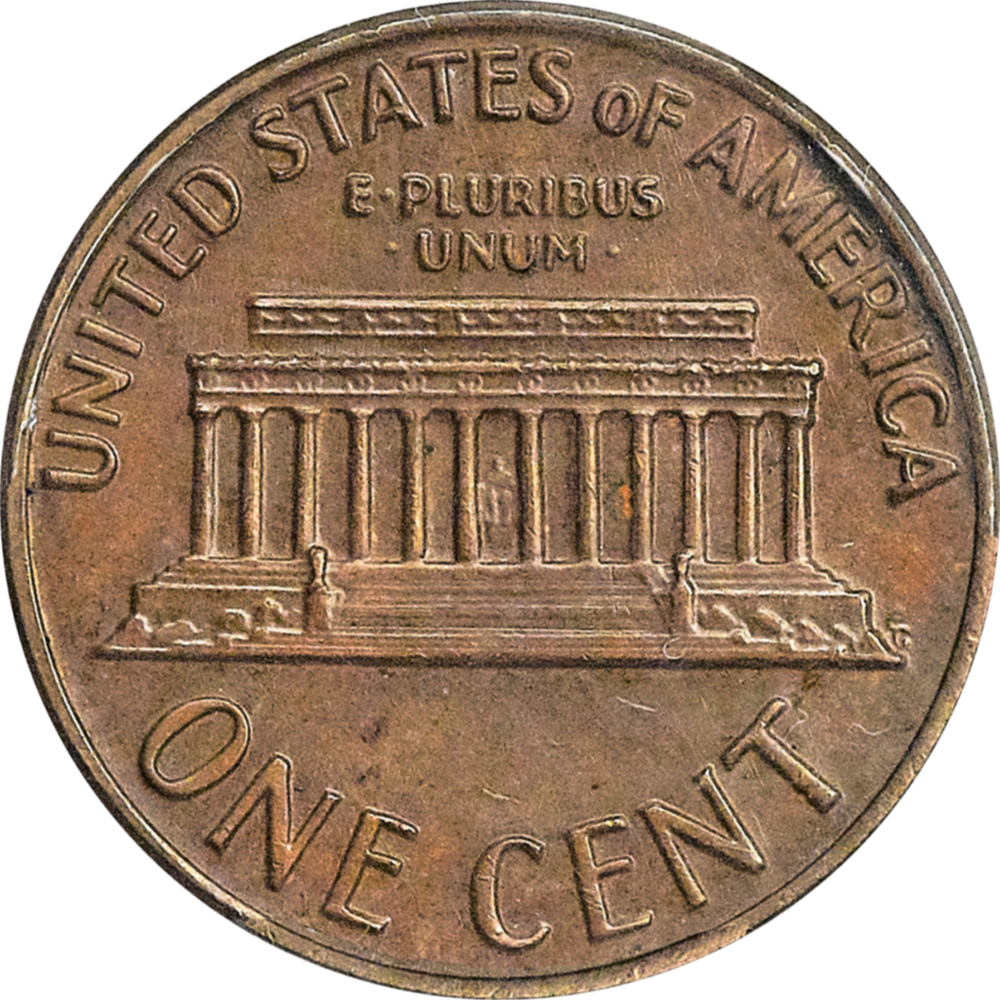 Starting with U.S. coins, the first we will take a look at is lot 3748, a 1969-S Lincoln Memorial cent with Doubled Die Obverse, graded MS-61BN by PCGS. In the Lincoln cent series, the most famous doubled die is, of course, the 1955, but it is far from being the scarcest. Much more difficult to find than the fabled 1955 is the 1969-S, FS-101, which exhibits strong doubling on the date and all lettering of the obverse. This doubling is caused during the production process when the image is transferred to an individual die from a master hub. In order to get a strong impression this is done multiple times, but in the case of this particular 1969 obverse die, a small shift occurred, resulting in strong doubling that is clearly visible. The mintmark was added later in the process, and thus does not show any doubling. Very rare in any grade, this is a major rarity seldom offered for sale. 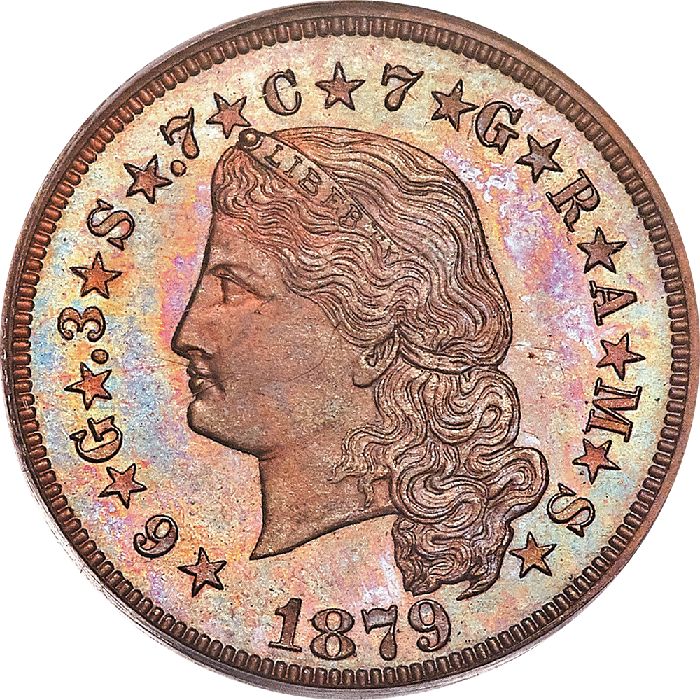 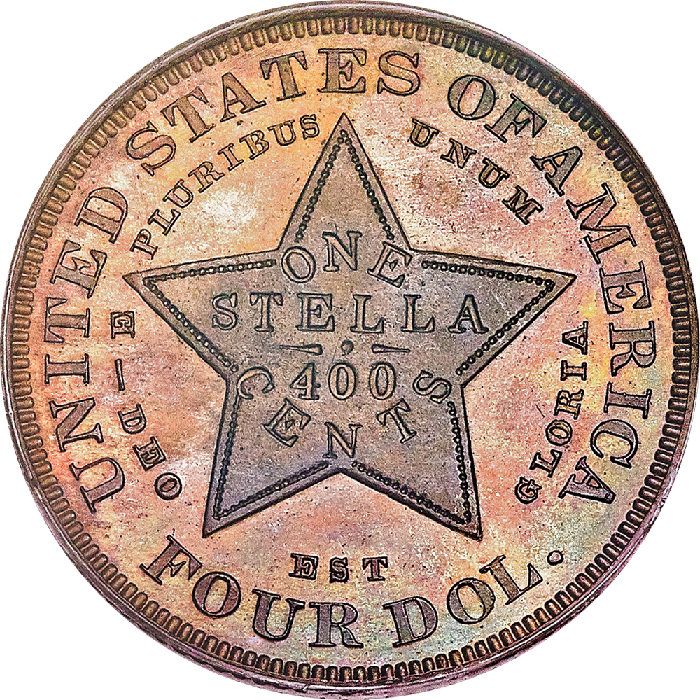 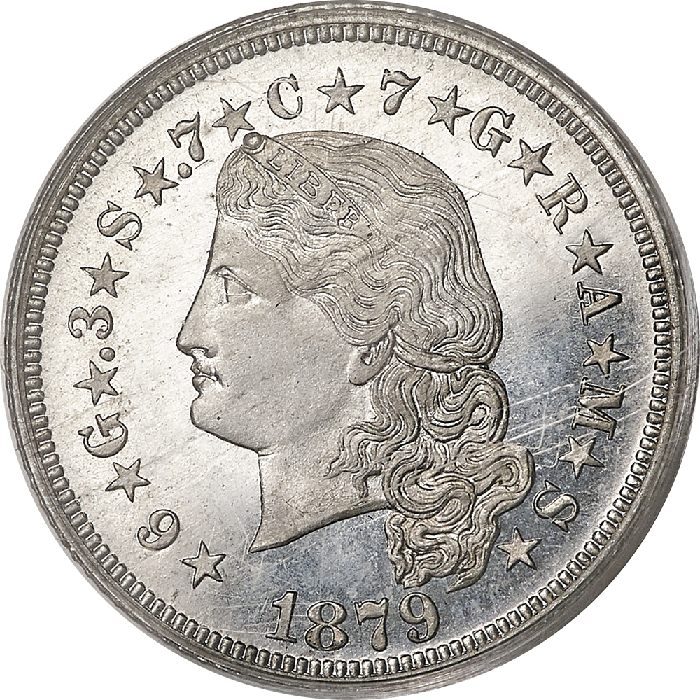 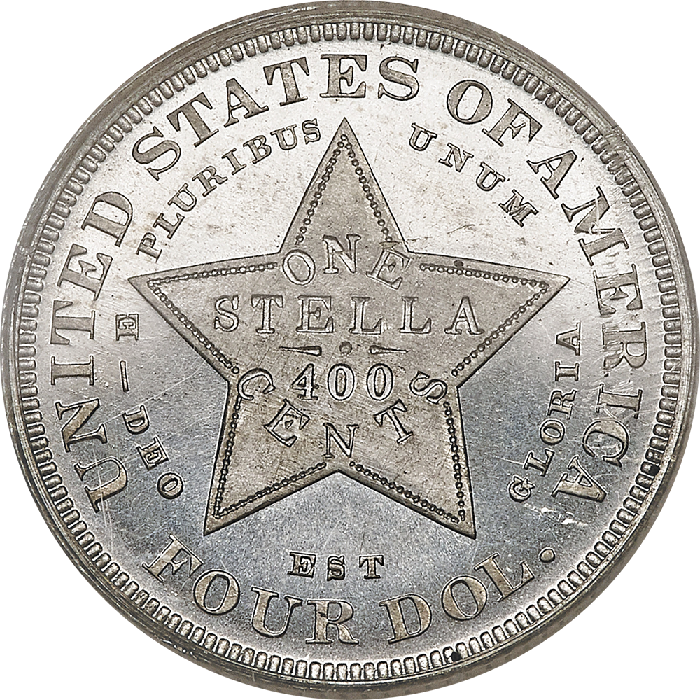 A pair of pattern coins offered as lots 4131 and 4132 are examples of the very rare 1879 $4 Stella, a pattern denomination struck in various varieties that are often included in type sets of United States coinage (even though they were never struck for general circulation). Struck in copper and aluminum, respectively, these off-metal examples are actually rarer than the coins struck in gold, but since they are off-metals they are not as popular as their gold counterparts. Both are of the Flowing Hair variety by Charles E. Barber. The copper example is graded PF-66BN by PCGS, while the aluminum is graded PF-67 by PCGS and approved by CAC. Neither metal was seriously considered for coinage, but off-metal sets of both circulating coinage and patterns were often struck for collectors.

The British Mandate for Palestine encompassed what is today Israel, Palestine, and the Gaza Strip, and existed from 1920 until 1948, ending with the Palestine War. Initially, the Egyptian pound circulated, but in 1927 the Palestine pound was introduced. Both coins and bank notes were issued for Mandatory Palestine, with the Palestine pound being divided into 1,000 mils. A complete set of coins issued for the territory consists of 59 coins, ranging in denomination from 1 to 100 mils. Bank notes were issued in denominations ranging from 500 mils to 100 pounds. Of the coins, the 100 mils of 1931 is considered the key of the series, and is an extremely difficult coin to find, especially in Uncirculated condition. 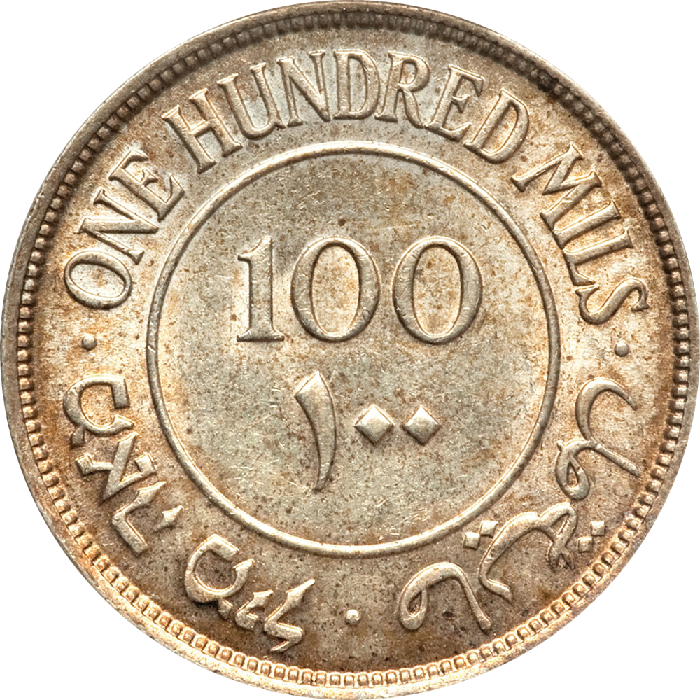 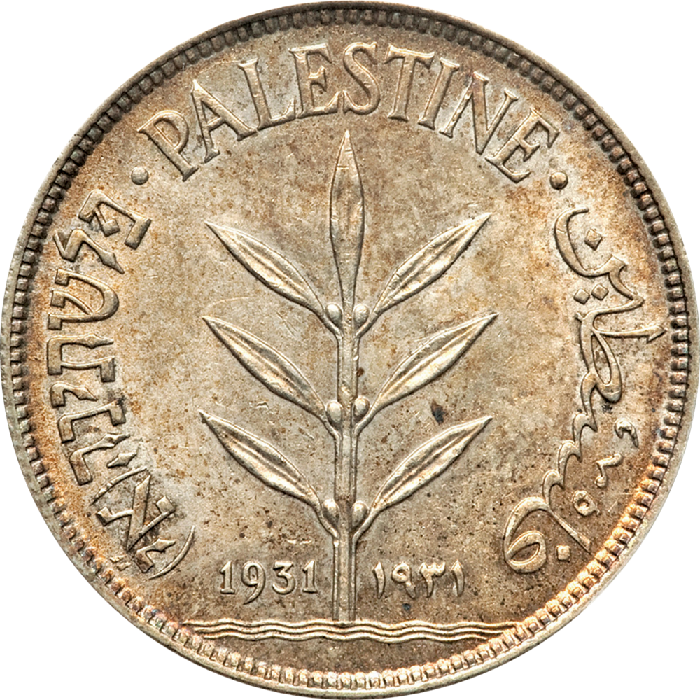 Lot 31333 in Heritage’s World and Ancient coin auction includes an example of this rarity, graded MS-62 by PCGS. Struck in silver, this date had a mintage of 250,000 pieces (which is not the lowest of the series), but most of this date heavily circulated and were later melted, making this a major rarity in higher grades.

We are moving on to U.S. paper money now. One of the highlights is lot 20257, a high-grade (PMG 55 EPQ) example of one of the scarcer U.S. states and territories in National Bank Notes, a 1902 Red Seal $5 from the First National Bank of Fairbanks, Alaska. It was issued when Alaska was still a territory of the United States. This is part of a series of tens of thousands of different banks around the country that issued National Bank Notes. Collecting one from each U.S. state is very popular, and those from Alaska are among the rarest of them all. There were a very limited number of banks in the territory, and even fewer issued National Bank Notes. The population preferred coin, and bank-note circulation was relatively small, with many redeemed and very few saved. This particular example is a noteworthy one, which includes the top selvage of the original sheet, as it is one of the notes that were part of a small group of original sheets that appeared in the market sometime during the 1960s, but which was cut shortly thereafter.

The World Paper Money auction includes many highlights from around the world, including a Zanzibar 10-rupee note and the Ibrahim Salem Collection of Cyprus. We will feature another note, however, mostly to illustrate why world paper money may still be one of the untapped collectibles in the grand scheme of things. 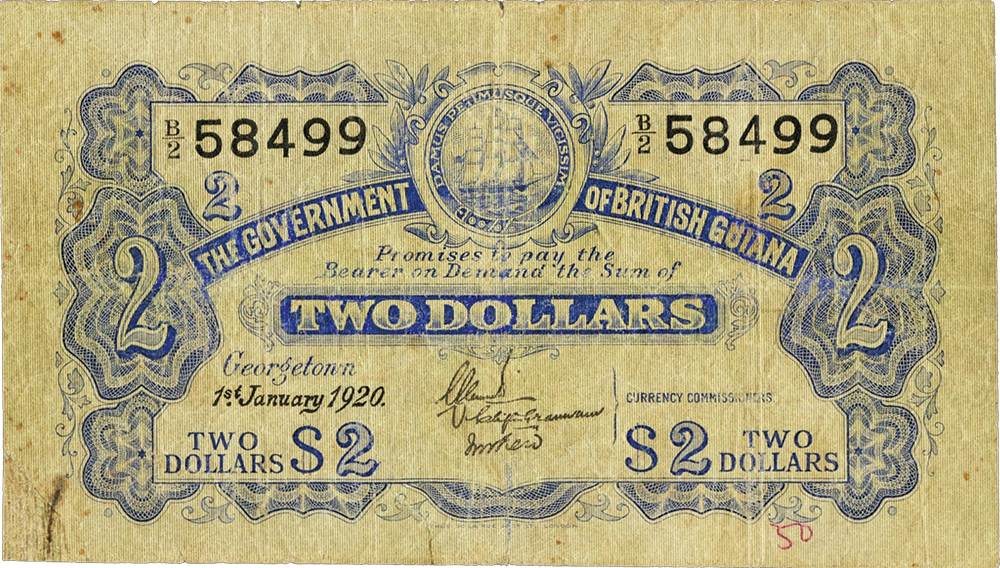 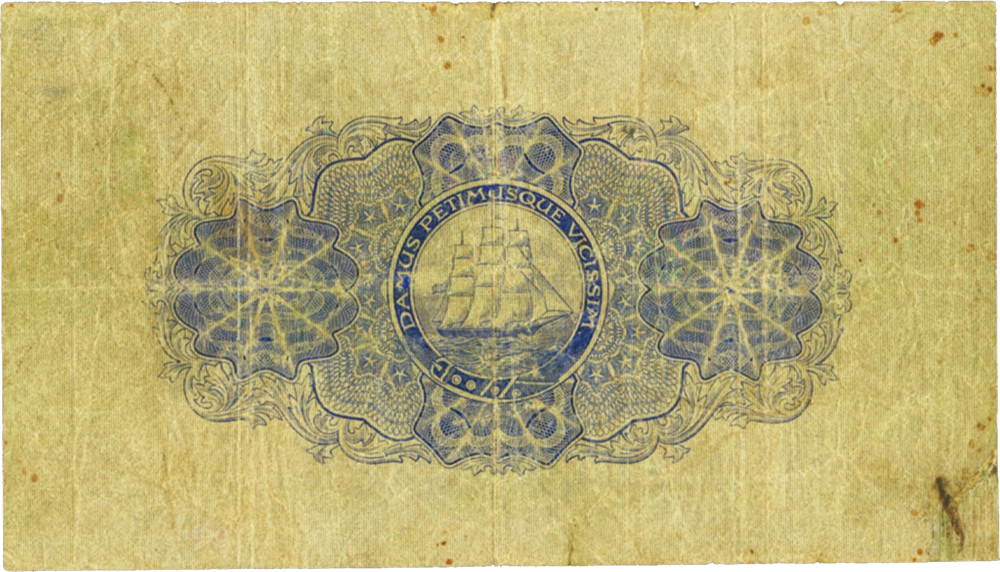 Lot 28093 is a 1920 two-dollar note from British Guiana, graded VF-20 NET by PMG. British Guiana was a British colony in South America that is now the country of Guyana. While the general public may not know much about this tropical country, stamp collectors will certainly be familiar with it, as one of the great rarities in philately is from British Guiana. The 1c magenta, as it is known, was issued in small numbers in 1856 and today is considered the most valuable stamp in the world, having sold last for nearly $10 million in 2014. While the two-dollar 1920 Heritage offering is not as rare (the stamp is unique), it is hardly common, and very few are known to have survived. The difference? The bank note is a lot larger and had a higher face value, yet is only estimated at $10,000–$15,000.