As part of the Central States Numismatic Society convention held in Schaumburg, IL this past week, Heritage Auctions organized a signature auction with rare and high-end US coins. In this recap we will take a look at some of the highest and most surprising results from the auction. Please note that all prices realized include 17.5% buyers premium. 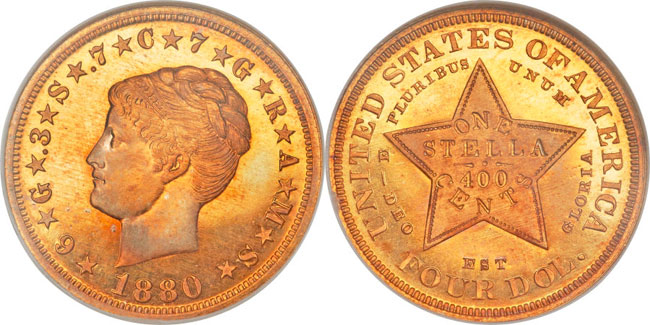 Four Dollar Gold pieces, a denomination now forgotten by most of the general public and never really struck for circulation, are none-the-less very popular with advanced numismatists. Collectors could choose from several choice examples of the denomination in the Central States auction. Lot 5301 was the finest known (graded NGC PF-67 and stickered by CAC) example of the 1880 Coiled Hair Stella (Stella being the nickname for the denomination), which realized $1,821,250, a price that positively surprised many. The 1880 Coiled Hair Stella, named for the representation of Liberty on the obverse as executed by George T. Morgan, is the rarest of all four major Stella varieties with a maximum of 10 examples generally known to exist. As all coins of the denomination this particular coin is considered a pattern, and most numismatists believe that the 1880 issues are products struck by the United States Mint in Philadelphia merely for the sale and distribution to wealthy collectors, a practice which was quite common at the Philadelphia Mint at the time. 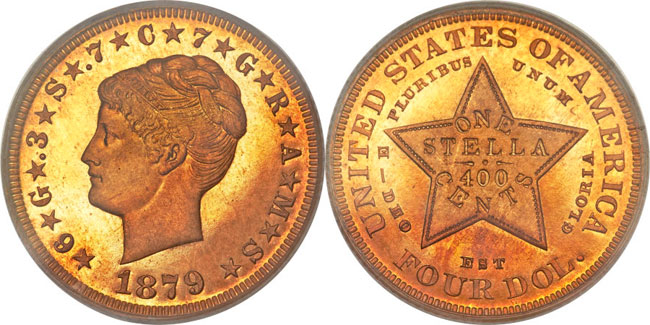 Realizing $881,250 was lot 5299, the 1879 dated version of Morgan’s Coiled Hair Stella. Graded PR65 by PCGS and stickered by CAC as well, the 1879 dated pattern is almost equally as rare as the 1880 version discussed above. The 1879 issue was struck around the same time as the 1880 dated coins, using backdated dies, most likely exclusively for sale to collectors as well. The 1879 issues are considered true patterns, with the idea that the new denomination would be able to compete with European trade coins such as the French 20 Franc and British Sovereign, both of which were valued at approximately $4. 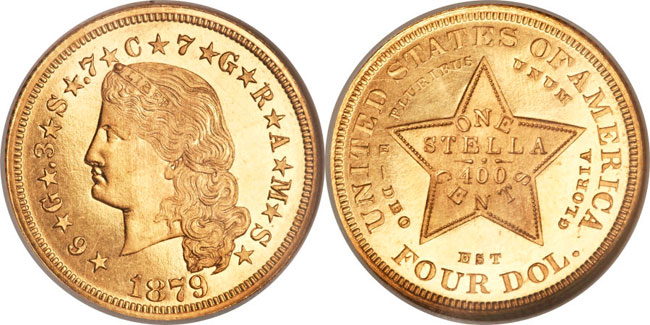 A complete collection of Stella’s struck in gold include a total of four issues: the two mentioned above, and the 1879 and 1880 Flowing Hair issues, designed by Charles Barber. The 1879 Flowing Hair Stella is considered the most available of the denomination, with a reported mintage of approximately 400 pieces (the majority of which are restrikes). Lot 5297 in the CSNS was one of the finest known examples of the most “common” Stella, graded PR67* Cameo by NGC, and realized $305,500. 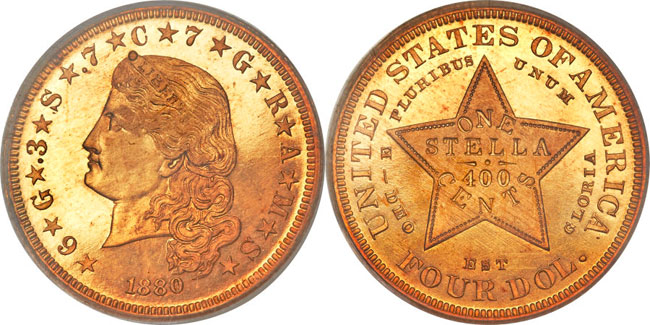 Finally, an example of the 1880 Flowing Hair issue, was offered as lot 5300, graded PR66 by PCGS and realized $517,000. Considered the third rarest of the four Stella issues, there are less than two dozen examples known in all grades. 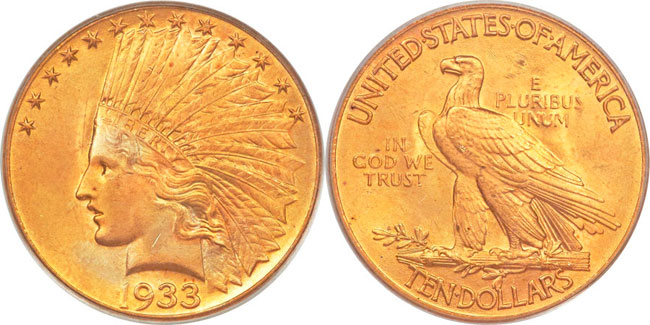 Of course there were more coins offered than just Stellas. Lot 5419 was a very rare gem example (PCGS MS65 CAC) of the final classic Gold Eagle, 1933 Indian Ten Dollar Gold Piece, which realized $822,500. A coin of which the majority were melted shortly after being struck when gold was recalled from circulation following Presidential Order, very few escaped the melting pot, making it one of the true rarities of all 20th century gold coins. 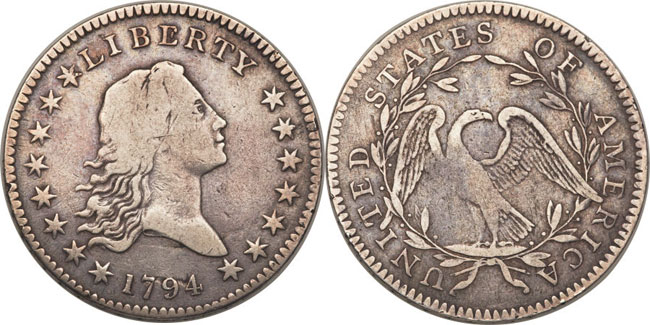 A unique Flowing Hair Half Dollar was offered as lot 5059. The Overton-109 variety of the 1794 Flowing Hair Half Dollar, graded NGC VF25 pairs a unique obverse die with a reverse die also used for the Overton-105 variety. Known in silver since the 1970s, when the consignor (noted specialist Robert P. Hilt) purchased the coin unattributed, the obverse die pair seems to have been meant exclusively for trial purposes, as two impressions in copper from this obverse die are known (Judd-17, both in the Smithsonian Institution). Despite many specialists looking for a second example of the die pair none have ever been found. The coin realized an amazing $705,000 in its first ever public offering. 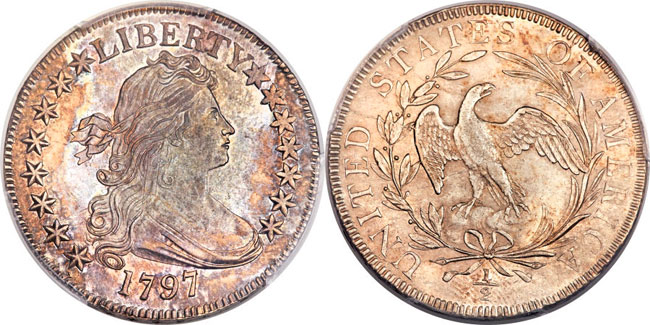 The final coin we’d like to mention is another half dollar, an extremely rare mint state example of the 1797 Draped Bust/Small Eagle Half Dollar, graded PCGS MS64 CAC, pedigreed to the Byron Reed collection and offered as lot 5071. This type, which is rare in all grades and extremely rare in uncirculated condition is considered the ultimate type coin in the United States series. With a mintage of 3,918 coins for the type the supply is extremely limited, and with thousands of serious collectors assembling type sets of United States coinage demand is extremely high. The price realized, $493,500, gives a good indication of the rarity of the coin and demand of such coins.

With a total of 72 lots realizing six figures or more this was a surprisingly strong auction with many rarities that are seldom offered for sale. Obviously we can not cover all these coins in a brief article such as this, so we invite you to take a look at the auction prices realized using this link: http://coins.ha.com/c/search-results.zx?Ns=Price|1&N=51+790+231+4294950212 (login may be required).