She is nationally known for her series of “Niskavuori” novels and for “Hulda from Juurakko” which was turned into the Hollywood film “The Farmer’s Daughter”. The lead role of this film secured an Oscar for the actress Loretta Young in 1947. In all these works, Wuolijoki included the presence of strong, decisive and inspiring women characters. Born as Ella Marie Murrik in Helme, South Estonia, she moved to Helsinki where she married Sulo Vuolijoki. They divorced in 1923. 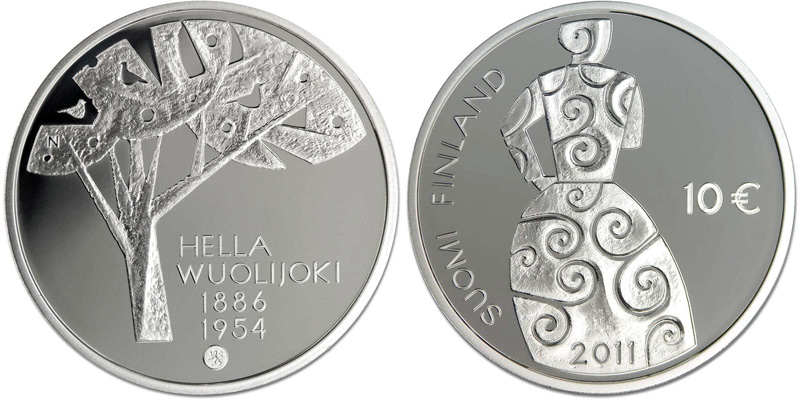 The coin’s design is the work of artist Petri Neunonen. The obverse depicts a stylised tree positioned to the left side, along with the text “HELLA WUOLIJOKI 1886 1954” arranged in four lines to the right of the tree. The reverse includes the coin’s denomination of €10 and illustrates a female form along with the text “SUOMI FINLAND” and the year of “2011” just under the central image.

This is the second and latest in the series of commemorative coins dedicated to Great Finnish women. In 2010, the series was launched with the Minna Canth collector coin.

For more information on this and other coins in the series and subjects, please visit the website of the Finnish Mint at: http://www.suomenrahapaja.fi/eng