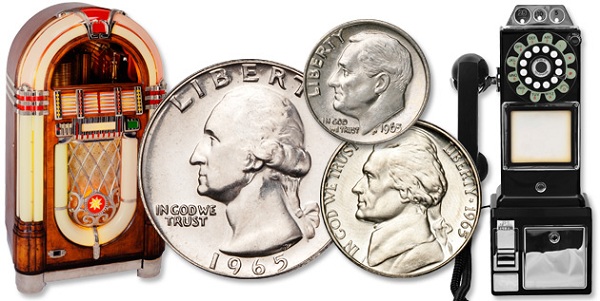 Fifty years ago in November 1965, the Philadelphia Mint released the first U.S. clad coins – Washington quarters. At the time, America was in the midst of a coin shortage. It’s hard to imagine but, before debit and credit cards or electronic funds transfers, coins played a big part in the economy. Teenagers fed them into jukeboxes or used them in pay phones to call a pal. Nickels, dimes and quarters were used in soda, cigarette and vending machines. And, before the days of EZ Pass, they were tossed into baskets at tollbooths – everybody used coins. And the coins of choice, in most cases, were dimes, quarters and half dollars struck in 90% silver!

Adding to the coin shortage problem was the simple fact that the U.S. economy had taken off after WWII. Young servicemen returned homeand married, and now were raising families. Houses sprang up in the suburbs and schools were built. Auto dealerships, garages and groceries stores opened nearby. From 1945 to 1955, circulating coins increased by 50% and then doubled in the next decade. After living through the Great Depression and celebrating the end of WWII, people wanted to spend the money they earned. And, they spent it on household conveniences – refrigerators, TVs, washing machines, vacuums and more. This spending boosted the economy and created jobs, but it also added to the coin shortage problem.

Aside from the rising demand for coins, the shrinking silver stockpile, held by the U.S. Treasury posed a problem too. Not only was silver used to back Silver Certificates and make coins, but also it was used in industry. It was used in batteries and electronic equipment, and in film for photographs (remember the Brownie Camera and Polaroid?). 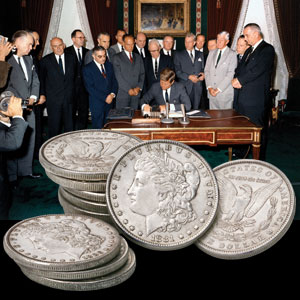 To pump more silver bullion into the stockpile, President Kennedy signed a bill in June 1963, retiring $5 and $10 Silver Certificates. The law also reaffirmed Silver Certificates could still be exchanged at the U.S. Treasury for silver dollars, or bullion, setting off the great Morgan dollar stampede. This legislation bought time; but with the economy rapidly growing there were simply not enough coins to go around. The shortage became critical in 1964, aggravated by rising silver prices and hoarding, so the U.S. Treasury reopened the San Francisco Mint to help meet demand. The following year Congress passed legislation authorizing clad coins and in August, the first clad issues were struck at Philadelphia.

The switch to clad coinage gave collecting a boost. People plucked silver coins from circulation to complete collections or put aside rolls. Decades later, we’re reaping those benefits because classic silver coins are still available, and clad coinage, at fifty, is getting a second look from collectors. Who knows, with the advent of mobile wallets, payment apps and bitcoins, maybe people will be scrambling to put aside clad coinage. What do you think the future of coins will be?