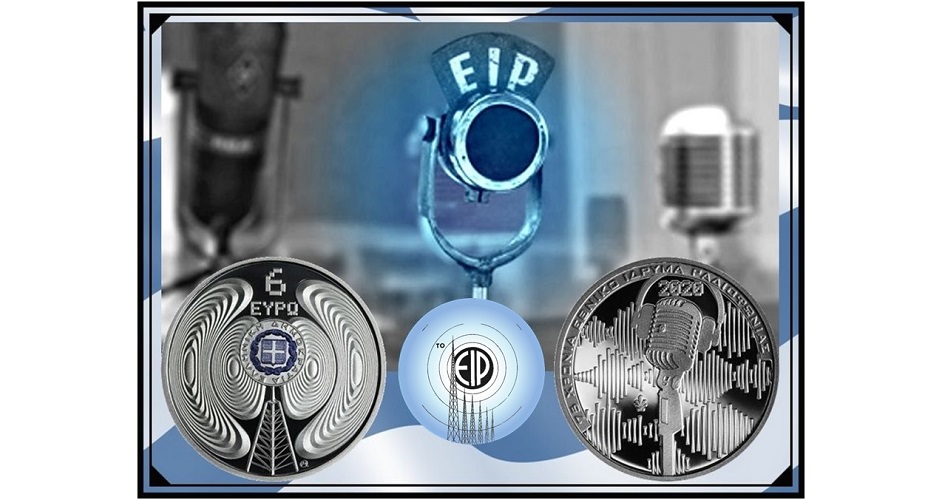 The Bank of Greece has issued (9th November) new silver collector’s coins on the occasion of the country’s 75th anniversary of the establishment of the National Radio Foundation. With the occupation by the Third Reich at an end, leftover radio transmitters and receivers were put to good use to for the formation of a national radio communications network with the primary Athens Radio Station, under the supervision of the existing Radio Broadcasting Service.

The station’s interlude signal began programming with the familiar Tsompanakos (shepherd’s tune) and then with the opening message “Athens here.” Ultimately this opening would reach ever-increasing audiences across Greece, the mainland, and islands as local stations were gradually set up in other cities and forming a greater network. In 1950, EIR became one of 23 founding broadcasting organisations of the European Broadcasting Union, also a product of closer cooperation within the European continent after World War II.

1952 saw the launch of a second station which offered programming focused on entertainment, while the first station remained primarily focused on news. A third station was launched two years with mainly a classical line-up. Under the inspired direction of internationally renowned composer Manos Hadjidakis (1975-1982), the station evolved into what was regarded as a genuine culture hub. Households in Greece along northern borders and closer to Italy could receive television from other countries, but it wasn’t until 1966 when EIR would begin to broadcast television on the country. In that same year, a second public broadcasting service was established, the military-run Armed Forces Television.

With two separate television broadcasting services in Greece, EIR amalgamated television into their name and became known as Hellenic Radio Television, or simply “ERT,” in 1970. Ultimately, by 1987, the two separate broadcasters joined forces with the stations ERT1 and YENED being renamed ERT2 under the Hellenic Broadcasting Corporation banner. ERT remains an integral means of communication and has kept up with technological developments such as cable and satellite as well as digital broadcasting.

The coins are produced by the Hellenic Mint at their facilities in Athens, on behalf of the Bank of Greece, and designed by M. Antonatou. The obverse side depicts a Radio mast or transmitter antenna which is surrounded by stylised representations of bursts of broadcasting waves. Above the mast is a circular badge which includes the Hellenic cross seen on the national flag with the text ΕΛΛΗΝΙΚΗ ΔΗΜΟΚΡΑΤΙΑ encircling the cross. Above the badge, which includes colour, is the denomination of 6 EYPΩ.

The reverse side includes a depiction of a vintage-era microphone widely used during the 1940s centred with the year of the coins’ issue, 2020, along with voice pattern representations shown in the background. The commemorative text 75 ΧΡΟΝΙΑ ΕΘΝΙΚΟ ΙΔΡΥΜΑ ΡΑΔΙΟΦΩΝΙΑΣ (“75 years national radio foundation”) is placed above and around the primary design.

Each Proof quality coin is presented in a custom Bank of Greece-branded black coloured case accompanied by a certificate of authenticity. Collectors residing in Greece can visit the Bank of Greece’s headquarters in Athens but should inquire about opening hours during the current Coronavirus precautions. Those outside Greece are asked to e-mail the following mailing address: .